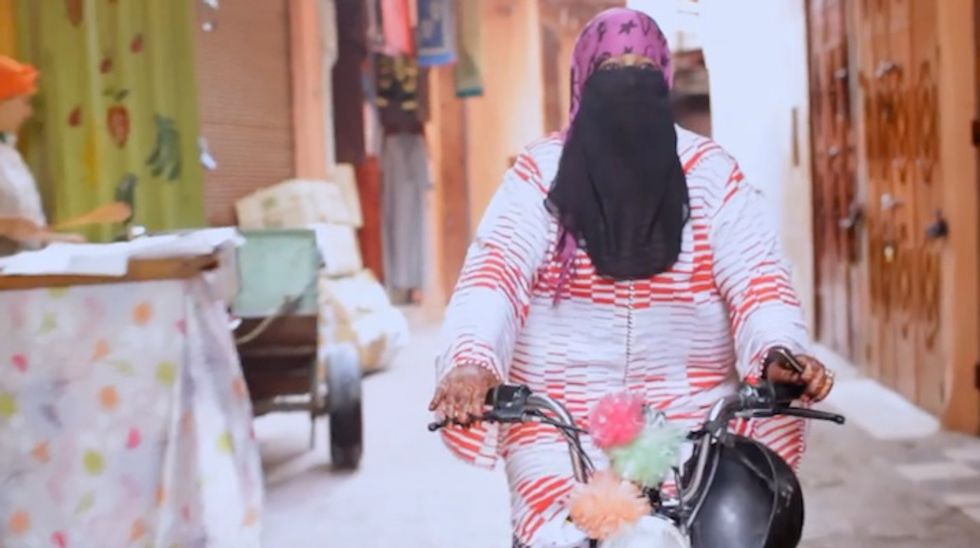 Hassan Hajjaj will premiere his new documentary, 'A Day In The Life Of Karima: A Henna Girl,' in May at the Los Angeles County Museum of Art.

After two years of working on a Marrakesh-set documentary project, Moroccan pop art photographer/filmmaker Hassan Hajjaj will soon unveil his new documentary, A Day In The Life Of Karima: A Henna Girl. In the lead-up to the film's world premiere at the Los Angeles County Museum of Art (LACMA) in May, Hajjaj has shared a high adrenaline trailer and an accompanying music video for an artist by the name of Koma. From the short clip, the film looks to be a live action version of Hajjaj's iconic Kesh Angels photographs of Moroccan biker women. The project follows the badass Marrakesh adventures of Karima, who the trailer reveals is a wife, mother, artist and graduate from "Jamaa Fena: the university of street life." Hajjaj explained his excitement about the film's premiere over Facebook:

"AFTER 2 YEARS OF WORKING ON MY NEW DOCUMENTARY 'A DAY IN THE LIFE OF KARIMA A HENNA GIRL' IT WILL BE SHOW AT LACMA MUSEUM ON 13TH MAY,ITS FREE ENTRANCE.

A Day In The Life Of Karima: A Henna Girl will make its world premiere May 13th at the Los Angeles County Museum of Art's Bing Theater. Watch the film's trailer and the music video for "Karima" below. For more from Hajjaj, see his Moroccan biker barbie doll photos and his Wax Super Deluxe menswear collection with Moroccan designer Amine Bendriouich.

An earlier version of this article incorrectly referred to Amine Bendriouich as a Tunisian designer.