The Power of the Headwrap: From #FeesMustFall to #RespekTheDoek 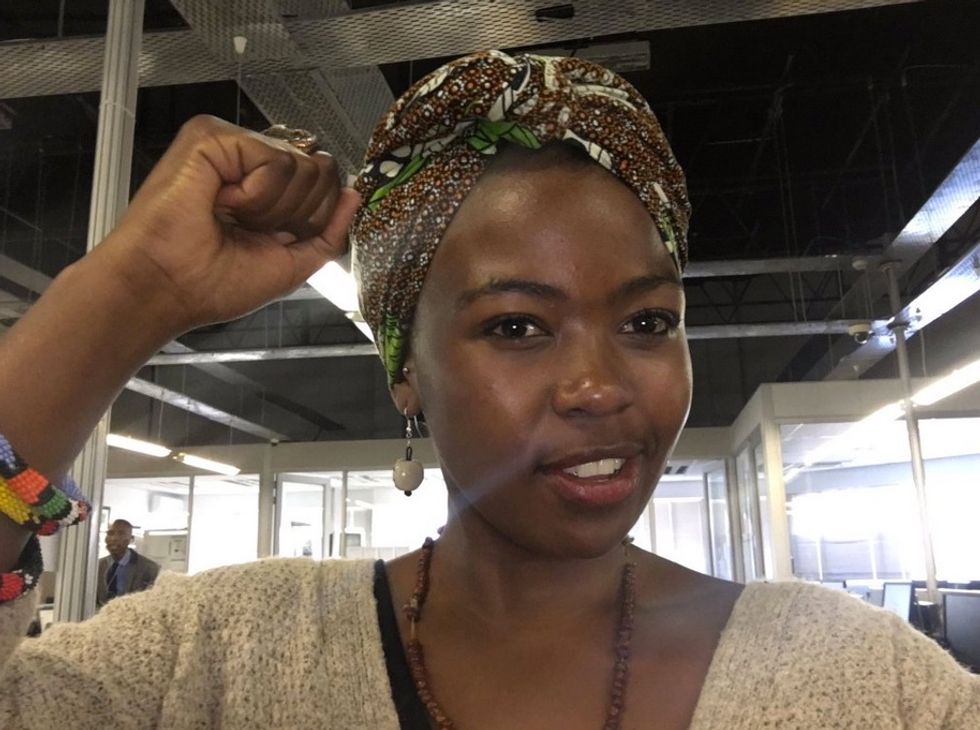 A young black, South African woman reflects on the meaning of the headwrap.

It’s an integral part of my image, a bold statement to the rest of the world and a symbol of my empowerment as a young black, African woman. As I stand in front of the mirror and fuss over a brightly-coloured scarf, I think of how many other young, black women like me in South Africa are probably standing in front of their mirrors and doing much the same––a multitude of different coloured fabrics of varying texture being twirled and twisted this way and that––all a part of something much bigger than ourselves; a sisterhood of sorts.

Recently there’s been a renewed embrace of the headwrap, particularly by younger women. The headwrap, known by many names, including doek, dhuku, tukwi and gele, has begun to embody something more powerful than just the confines of the predominantly aesthetic space in which it was initially accepted.

The headwrap took centre stage late last year when Nompendulo Mkhatshwa, president of the Student Representative Council (SRC) at the University of the Witwatersrand (Wits), was photographed leading the #FeesMustFall movement. In one of the movement’s most iconic photos, Mkhatshwa is clad in her signature ANC headwrap with her arms raised in an unassuming yet powerful gesture as she leads a crowd of protesting students. This gave rise to the concurrent #MbokodoLead, derived from the Xhosa phrase wathint' umfazi, wathint' imbokodo (you strike a woman, you strike a rock), which aimed to highlight the prominence of young women and their leadership during #FeesMustFall.

More recently, the headwrap was front and centre of a nationwide stir when news channel eNCA allegedly removed one of their reporter’s segments off air due to her appearing in the video with a headwrap on. The arts and entertainment reporter, Nontobeko Sibisi, hit back with a passionate email to her bosses, saying “Some of us have been half naked on TV, in PJs, gowns, ballet tutus, speedos, boxing gear, all fitting to a particular context – yet somehow a doek was offensive during a significant and celebratory day and month in our continent. I personally find this as a double standard.” Many South Africans took to Twitter to show their support for the reporter and their refusal to allow corporate culture to reject African aesthetics in favour of eurocentric ideals. A number of women posted pictures of themselves in their headwraps, and soon #doek and #RespekTheDoek were trending.

As I consider these two movements, #MbokodoLead and #RespekTheDoek, I begin to reflect on my own morning ritual. No longer does it merely represent a beautifying process, simply concerned with boldly asserting the African aesthetic. It’s about standing together as women. It’s about acknowledging daily that the headwrap is more than just a piece of beautiful fabric. It’s a crown and a symbol of courageous leadership.

I also recall our late musical diva, the legendary Ma-Brr, Brenda Fassie, donning bold headwraps and blazing her way through the world of music with her earth-shattering performances. And then I’m reminded of a momentous time in our history when former President Nelson Mandela was placed on the infamous Rivonia Trial and his wife, Winnie Madikizela-Mandela, arrived at the courthouse clad in Xhosa attire, complete with her headwrap, her crown.

As I prepare myself for yet another day, I recall these images and I twirl the ends of a blue

and grey print headwrap. As I place the rose-shaped bun in its correct position and ensure the sides are tucked in properly, I smile to myself. I am a strong, empowered, young black woman and with my crown, I feel as if I can bring mountains to my feet.