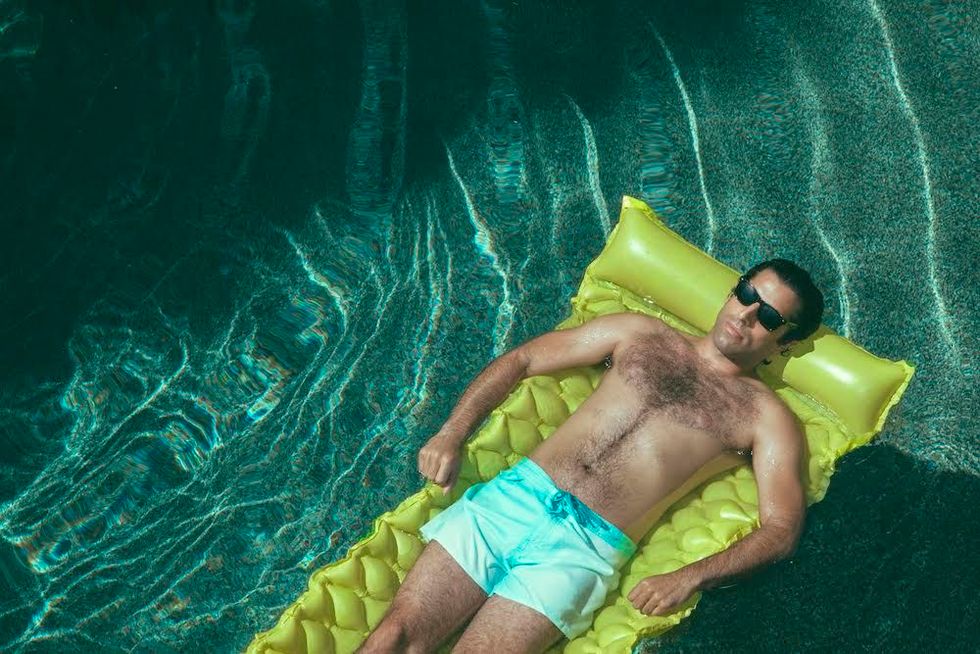 A conversation with Heidi Saman about the making of her debut film 'Namour.'

I first heard about Heidi Saman on Tumblr. An insightful quote from the festival darling about the blasé acts of racism that erupted in the process of funding her debut film, Namour, proved that she was a perfect mix of professionalism and well needed candor in an otherwise politically mute industry.

Namour revolves around Steven Bassem, wonderfully portrayed by Karin Saleh, a twenty-something Egyptian-American valet at a top tier restaurant grappling with adulthood in the face of parental aspirations and the 2008 economic recession. Namour resides on the nexus of middle class anxiety and cultural assimilation, a heavily overlooked diasporic experience in visual media that’s only recently being remedied by portraits of first generational immigrant life from shows like Master of None and Jane the Virgin.

From the beginning of our phone call, an instant kinship was formed despite the anxiety of talking on the eve of Namour’s Netflix debut. Saman and I both fell in love with the art of cinema due to early exposure of Italian neo-realist classics; both unlearning the pervasive way racism has impacted our navigation of the film industry, and we’re both attracted to building a genuine film community that primarily uplifts the narratives of people of color. Given the highly accomplished debut that provides an amalgamation of style and substance, Saman, who is also a full time producer at NPR’s Fresh Air with Terry Gross, has guaranteed herself apart of a league with some of the brightest up-and-coming filmmakers and we can’t wait to see what’s in store for her next!

Let’s start at the beginning, you originally went to university to become a journalist, what made you take the leap into narrative filmmaking?

As a matter of fact I went into university only thinking about journalism but actually enrolled in a bioengineering major at the University of California-San Diego. I had the traditional first-generational aspirations of becoming a doctor but as apart of my literature requirement I took an Italian film course and that really changed the course of my life entirely. I saw a lot of classic neo-realist films like Bicycle Thieves and Rossellini’s Open City, movies that I didn’t have access to before and without telling anyone, I started taking more film classes and switching my major to literature without the knowledge of my family or friends, so I consider that the beginning. Opening myself to liberal arts and taking different courses that weren’t apart of the regular curriculum set me on a course to filmmaking.

Would you consider that leap from the sciences to the arts a difficult one to make emotionally speaking? Especially as a first-generation—did you feel like you were disappointing your family?

It just felt wrong, hence my reasoning for not telling anyone I was doing it! It felt transgressive like I was breaking some sort of rule, and in some odd way I was never really upset with my parents about it because having those restrictions was actually quite good for me. Having to prove myself with so many obstacles actually makes me feel grateful. So after my sophomore year of college I saved up enough money, took out a loan and enrolled in a photography class and thought ‘Oh my God, this is it, this is something I can do’.

Youre short film, ‘The Maid’ was in competition at Cannes, the script for Namour was apart of the Sundance Screenwriters Workshop and yet it was an uphill battle to find financiers. It might be a difficult question to pose from the outside looking in but do you think race played a factor in this given the fact that the film is a nuanced portrait of the fluidity of Arab-American life that doesn’t use weaponized stereotypes?

I think it’s a new thing for Americans to witness Arab-American storytelling in a stylized art-house way. This type of filmmaking is more conducive to Europe [as opposed to The United States] and in essence this story is about a depleting middle class, so it doesn’t have what I call ‘poverty poor’ where cultures impacted by poverty can unfortunately be a marketable tool in moviemaking. [Namour] isn’t necessarily a ‘sexy’ subject matter despite being a common one for immigrants in this country. It’s not about oppression or overt racism, it’s not framed around religion or a marriage or impending marriage, so it doesn’t hit all those checks that are ripe for standard immigrant storytelling, which added to difficulties in securing funding.

As a result, you launched a successful Kickstarter campaign but also compared crowd funding to ‘running for office.’ Would you consider that the most difficult part of making the film? If not, what was?

I would say raising money and the distribution process to be the two hardest parts. Frankly, I didn’t learn how to do either in film school and I think more and more filmmakers need to learn how to be business people. We need to know how to raise money, pitch, take the film through the exhibition process and since distribution models are constantly changing, you need to stay on top of where your audience is and where they’re going to find your film. I didn’t know how hard it would be. I had no clue how soul soaking it would be because you’re constantly getting no's. Any sane person would just stop but you have to keep going. Somewhere down the line you have to dig deep and find the resources to keep going so I applied to every grant possible and somehow my parents gave me money and my brother and I took out a loan. But it’s truly a crushing experience because you think ‘if this many people are saying no then I should just stop it must not be a good idea.’

In a way, being delusional is a key ingredient to being a successful [or at least working] filmmaker.

I agree! You have to be the C.E.O of your film and that doesn’t just mean directing—you have to see it as a business, know where your audience is, learn how to build it and engage with them. I believe [independent] filmmakers should be on social media because it’s one way to build community and constantly engage them.

By the time you started contextualizing Namour, you had already been out of film school for years and seemed to have lost that safety net of a film community. Do you consider online film communities to be the next best thing?

I left [Temple University] graduate film program in 2007 and got to travel around with my senior thesis project, The Maid for a couple of years after that and began to think about Namour around the same time. But naturally, my biggest fear post-graduation was ‘I need a full time job’ so I threw a lot of my effort into securing that and was lucky enough to get one but I then I was away from that safety net so [online communities] was for sure the next best thing. I started my Tumblr in 2012 because I missed talking about film; I missed looking at certain frames of film, and the passionate people who cared about cinema so I told myself everyday post something on this blog to remind yourself why you do this to begin with. And although I don’t have a lot of followers I found some good people that way.

Nearly six months went by after you won the Los Angeles Film Festival Film Festival’s LA Muse Award to the announcement that Ava DuVernay’s grassroots film collective, ARRAY, had picked up Namour for distribution. The wait between film festival to distribution is a daunting one, how was that experience like and how did you gain the eyes and ears of one of the world’s top working directors?

I had only made short films up to this point so I was naïve to the reality of distribution models for feature films, especially since the model has changed dramatically in the last few years I wasn’t sure what to expect. [During pre-production] I reached out to Ava DuVernay, who I had met through my day job at NPR during her Middle of Nowhere press tour and asked if she had any recommendations for producers and she gave me two names, one of which lead me to Namour’s producer Matthew [Keene Smith]. Thankfully, the film was a success at L.A. Film Festival, which is where I met her again, but it was only to attend a talk that ARRAY was giving. Sometime in October or November, Matt and I received an offer from ARRAY and we said yes! The reason why ARRAY exists is the reason why I made Namour. I want more original films with people of color by people of color. Ava (through ARRAY) recognized that we need our own canon, she always spoke to my heart and I'm so happy that Namour is part of that!

My advice would be the same for both questions: your story matters. Racism has a lot of layers, one being the pervasive manner in which it invalidates yourself and your work but you have to believe and know that your important and your story matters.

Namour has enjoyed a nationwide screening tour in select cities and is now streaming on Netflix.

Rooney Elmi is a freelance writer and creator of SVLLY(wood) Magazine, an experimental radical print and digital publication geared toward curating a new cinephilia. Follow her on twitter @zenonthesequal.