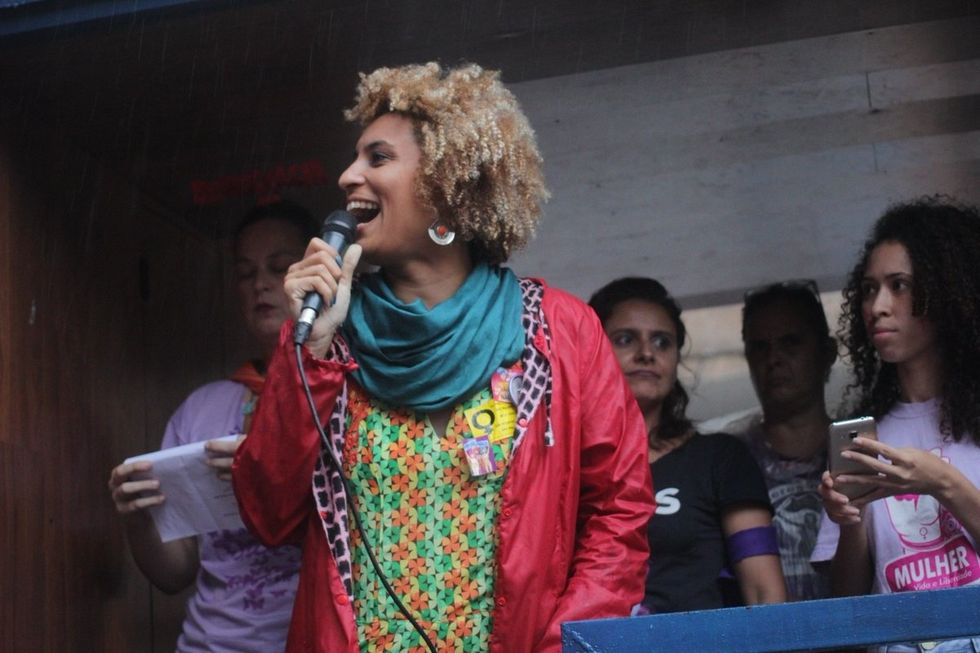 People are gathering across the globe to honor the late Afro-Brazilian politician and demand justice.

Brazilians across the diaspora, have been rocked by the news of the untimely death of popular Afro-Brazilian politician Marielle Franco, who was murdered alongside her driver Anderson Pedro Gomes in a targeted assassination on Wednesday night in Rio de Janeiro.

The 38-year-old first time city council member, was a champion of Afro-Brazilian rights, known for her extensive social work in the country's favelas. She was a national hero, a fearless leader who defied the odds as a black women in Brazilian politics.

The response to her killing has been overwhelming, as supporters remember her unprecedented impact. Brazil's former presidentDilma Rousseff described Franco as a "tireless social warrior."

"Sad days for a country where a human rights defender is brutally murdered," she said in statement.

Thousands gathered at City Hall in Rio de Janeiro Thursday morning to mourn her loss and call out injustices against black Brazilians. Members of the Socialism and Liberty Party (PSOL) carried flowers and signs, even carrying Franco's casket at one point as they marched. The event was broadcast live on teleSUR.

Several other protests and vigils are being held in cities across the globe in her honor, including six separate events in major cities in Brazil, reports the New York Times.

Here are eight vigils happening in cities in the U.S., Portugal, Ireland, Brazil and elsewhere that you can take part in to remember Franco's legacy. We will update this list as we learn of more events.

Brazilians take to the streets today throughout the country in response to the assassination of Marielle Franco, pr… https://t.co/yggthPprsG
— teleSUR English (@teleSUR English) 1521137411.0

When: Mar 16, 1 PM
Where: Embassy of Brazil in Dublin, Dublin, Ireland