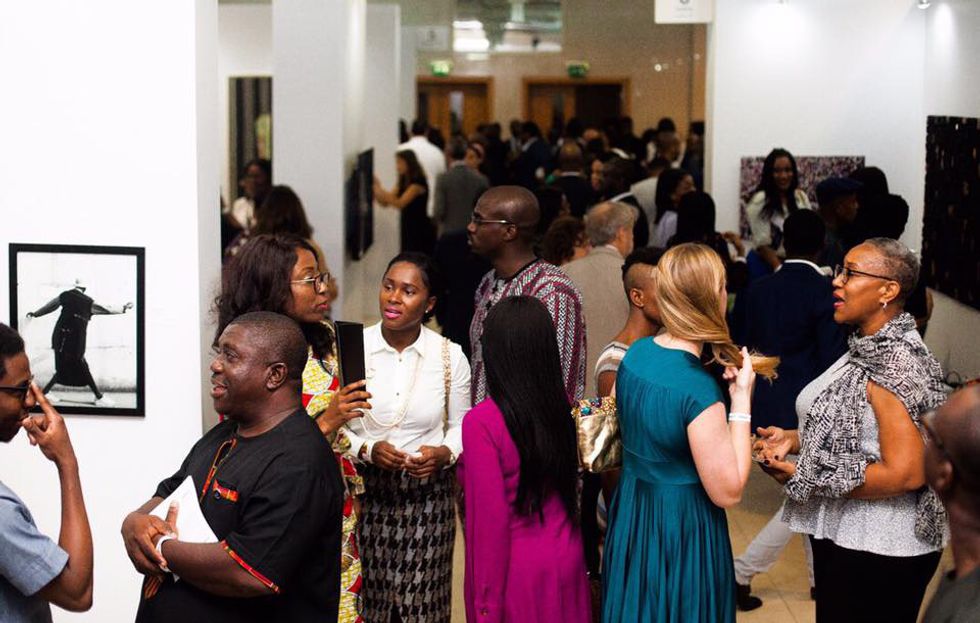 The second edition of Art X Lagos received over 8,000 people at the Civic Centre in Victoria Island, Lagos, where over 60 artists representing 15 African countries and 14 galleries engaged guests with visual art, talks and live performances.

The first piece of art on display was Olatunde Alara'sSmile installation, two parallel, smiley-adorned wooden boards spray-painted a bright yellow on the outside and a sombre red. Curious visitors walked between and around slabs of contrasting colors—a metaphor for the conflict that sometimes occurs between the mind and body of individuals battling mental illness.

As part of the installation, Alara asked the unsuspecting audience their views on mental illness before his collaborators, mental health professionals, 'intervened' with answers.

Another interactive project that welcomed patrons outside was Olalekan Jeyifous'Colouring Bus. White and pristine on opening night, the vehicle was completely overlaid with a riot of resplendent colors by the second day.

The exhibition saw artists, gallery representatives, patrons, the young and old mingle amid a plethora of creative manifestations: wooden busts, plastic bags molded into a pretzel-like structure and the body of a man, rubber slippers repurposed to resemble the warp and weft patterns of kente cloth, a monitor playing different repetitive scenes on a loop and abstract art of various styles and compositions.

"If the idea is multifaceted, if the idea spans different genres, if the idea transcends a certain meaning, I try to suggest form instead of show form," Tony Nsofor, an exhibiting Nigerian artist with a penchant for abstraction, says. His painting, Red Complacent in White, presented in bold strokes of red and black paint on a white background, personifies people comfortable living in a space they're seeing red. "They've been corrupted, bribed or dazed by the shining white of the space and they forget their humanity," Nsofor explains. "They forget their personal identity."

Greeting patrons on the second floor were Ghanaian Yaw Owusu's massive 8ft by 24ft sculptural creations. Part of his All that Glitters series, the three copper coins on wood installations not only symbolize the economic gap between the rich and the poor, but also explore materiality and the value of the 'worthless' one pesewa coin, which is still legal tender in Ghana.

"I'm interested in the complexity of what point a material becomes valuable and [when] it loses its value, and what comes out of that," Owusu says. "Are the coins transformed into something valuable or am I deteriorating the value it had to a mere material?"

Fellow countryman and second-time Art X Lagos exhibitor Jeremiah Quarshie reinterprets the definition of power in one of two displayed paintings, with famed Nigerian photographer Kelechi Amadiobi sitting on a generator smirking. The Lagos-based artist was quick to add that the generator wasn't referencing to Nigeria's power woes but an emblem of power.

"What I'm doing with [the Dynamics of Power] project is to capture […] powerful people alongside powerful objects," Quarshie notes. "If you have a generator and you have your fuel, that's light. So it's a powerful object that many people have to survive on."

The six curated talks proved popular among patrons. King of Covers featured Lemi Ghariokwu, the brain and hands behind Afrobeat musician Fela Kuti's iconic album covers (which were on display), narrating stories about his life with and without Fela. He also discussed some of his infamous cartoons, including one lampooning the military government's brutality and Nigeria's perennial potholed roads.

Passing around his decades-old membership card for the defunct Young African Pioneers, the political youth arm of Fela's Afrika Shrine, Ghariokwu encouraged youths to challenge political class "because the people who run the affairs here are not the right people. They're not conscious. There's no purposefulness, there's no ideology."

Senegalese art writer and independent curator N'goné Fall moderated a lively conversation titled Witnessing the Present, the Artist as Citizen, with artists Peju Alatise, Wura-Natasha Ogunji and Modupeola Fadugba, a late impromptu addition. Each woman spoke about the inspiration behind their various work, why representation in art matters, the role of artists as citizens, and how they hoped consumers would translate or experience their art.

"I want to imagine that my work is a mirror," Alatise says, "and that people can see themselves and their reactions, and become aware of who they are."

She also cited a lack of facilities for the art as the reason why her critically-acclaimed installation Flying Girls, the winged, life-sized girls showcased at the Venice Biennale this year, hadn't been exhibited in Nigeria.

Ogunji presented the last live performance of the fair. In keeping with her work's recurrent theme of women negotiating public spaces, If I Loved You interrogated the concept of beauty. Standing on pedestals, Ogunji alongside her co-performer took turns to utter the titular phrase, while spinning a spool of thread over their faces until they were 'deformed.' Open to interpretation, the 'You' in the phrase: If I loved you, it was for your beauty. Now that you're no longer beautiful, I don't love you anymore, referred to the audience, another person or the performers themselves.

Art X Lagos culminated with the announcement of the 2017 Art X Prize winner. Blacklist (Candle night) Series ii, the acrylic on canvas painting that depicts Nigeria's infamous power outages, won Habeeb Andu the coveted X-shaped trophy. The over 600 Instagram entries submitted by up-and-coming Nigerian artists were whittled down by voters to four finalists, from which the Art X panel selected the winner.

"Right now [I] am just still speechless and wondering why me. Thank you so!!! Much More greater things awaits us," Andu wrote on his Instagram page.

And if the successes of previous winner Patrick Akpojotor are anything to go by, chances are Andu's work will bear red stickers at the fair's next installment.