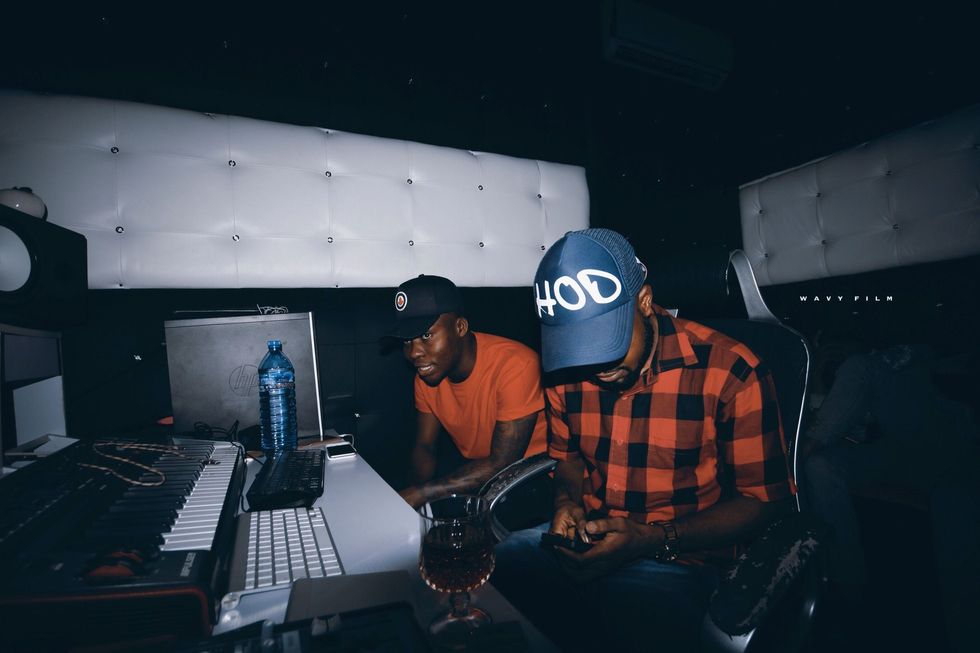 We talk to HOD about his production work and some of his exciting collaborations with Olamide and Reekado Banks.

Of the many tracks that stood out on Olamide’s The Glory,released last December, "Underground" immediately stood out further from the rest. In its slow burn and high-voltage, the beat for “Underground” matches the hardness of Lex Luger’s Godzilla beat for Rick Ross' “Blowing Money Fast.”

So, of course, I immediately looked up who produced it: his name is HOD and he isn't quite the newcomer I assumed he was. His manager, Iredumare Opeyemi, was a little annoyed that I’d made such an assumption.

Further research revealed more. As well as Olamide, HOD has worked with Kida Kudz, Moelogo as well as with Ayo Jay, who’s breakout single “Your Number” was recently certified gold.

Tell me about “Winner,” your first single with Reekado Banks.

"Winner" is my first single since rebranding from an in-house label producer to being an independent sound composer “H.O.D” himself (laughs). It's a single off my ongoing project, which will not be disclosed yet.

Did you co-write the song with him?

I composed the entirety of the sound while Reekado Banks wrote the lyrics and performed it.

How long did it take to to make the beat for “Underground”?

About five hours, after which Akuchi wrote the hook and then we started recording on the same day.

How did you get it to Olamide?

He invited me to work on his project, I went over to his studio and we were just vibing, going through songs. The beat (for "Underground") just came up in my iTunes, but only the chorus was done. If you have a big chorus like that, you don't rush the verse, at least that's how I like to work. So when Olamide heard the beat he was like, "this is mad." He said he'll love to put it out there and the best way is to do it himself. I will forever appreciate that.

Once you heard the finished version of the single, what did you make of it?

The song already had a trap vibe. I was thinking Nigerians might not appreciate the song, so the best thing would be to push it out of Nigeria and into the US and UK. But when I heard Olamide’s verses I thought, “no this isn't the case.” He brought it back to Nigeria and made it Afro-trap.

When did you start making beats?

At university, my bunkmate was a producer and I was the artist. He would make a beat on his top bunk and pass it to me. It was like a Godsend because it just started from there. As time went by, I was like "I can try and do this."

Then we had this break and by the time I came back the next semester, everyone was shocked. I'd spent the whole holiday not doing any homework and just learning how to use Fruity Loops. It was so exciting and that helped a lot because it encouraged me, and it encouraged a lot of other people as well.

What software do you use?

Logic Pro X. I started out using Fruity Loops which is user friendly but was still professional.

Do you believe that producers in Nigeria get due recognition for their work?

I won't say the majority do but yes, producers are beginning to get the respect and recognition that's been overdue to them. It is just the beginning though and more work needs to be done to complete what has begun.

I was impressed that you already have a solid management in place, one that's better than what many established artists have. Tell me about your relationship with Iredumare Opeyemi and Incubation Factory.

Incubation Factory Management and I had similar vision and idea of how the music business should be run from the first day we met and I don't think anyone else gets me like they do. The team is here to restructure the music industry in so many unprecedented ways; from business models, revenue creation and brand monetization. Mark my words!

Did you study in Nigeria?

I've always believed that if I’d finished university in Nigeria, it would have killed my creativity or curiosity about the arts. What was your experience of pursuing music production while at university?

It can and it does kill your curiosity. I know my name is HOD but I don't think school is the ultimate they make it seem. It's necessary, but not the ultimate. They go on about school, school, school. They tell you what to do but don't give you the opportunity to do it. When I got to London I was rah, there's so much I could do. But thank God for the internet now.

True. And it was cheaper at nights so me and my boy would take his hard drive and spend the whole night in a cafe downloading songs and beats.

(Laughs) You know. Now the music is at a stage where we could do great things because now we have what people out there (in more technologically developed countries).

True. There's little difference between Runtown's Instagram page to that of ASAP Rocky’s.

So, who else are you working with currently?

I'm working on a body of work my own artist DFummy and we’re bringing that out around summer time. She was afrobeats but we’re going to bring her to the world. It's a new afrobeats vibe. Now the world is Africa and we're taking over.

Who are your top five Nigerian producers?

Sarz, shout out to him on his "Get Up" jam with DJ Tunez,Maleek Berry, Altims, Legendury Beatz and Sess, that body of sound composition just had me like “wow.” I'd like to do that too

Who are your top five producers from the world over?