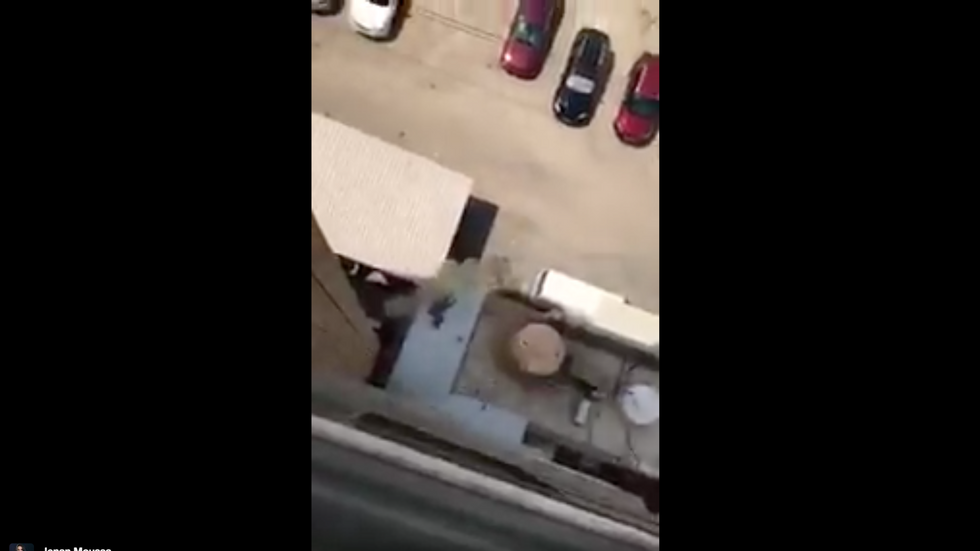 This video is one more reminder that African and Asian domestic workers in the Middle East are subject to unimaginable abuses at the hands of employers.

Be warned, this is not easy to watch.

This morning, the respected Middle East-based journalist Jenan Moussa posted a video to her Twitter of an Ethiopian domestic worker in Kuwait clinging to the seventh floor balcony and crying for help as her employer films it on her phone. We've embedded it at the bottom of the post.

According to this AFP report, the 12 second video was filmed and posted to social media by the woman's employer who has since been detained by Kuwaiti police.

The woman holding the camera is heard telling the hanging maid: "Oh crazy, come back."

The terrified maid is seen screaming "hold me, hold me", just before her hand slips and she falls down to hit the awning, which appears to soften the impact.

The employer made no reaction as she continued filming.

The woman survives but according to the article has suffered serious injuries.

The video has spurred talk on social media about the abuses guest workers in the Gulf states—female domestic workers especially—suffer at the hands of their employers. Reports of physical and sexual abuse, imprisonment and wage theft are routine in this industry that sees hundreds of thousands of women from across Africa and Asia who go, or are brought, to the region to work in affluent households.

Kuwait alone is said to be home to 600,000 foreign domestic workers while the United Arab Emirates, according to Human Rights Watch is home to upwards of 146,000. Saudi Arabia and Lebanon are other countries with particularly dismal stories of migrant labor abuse. The horrific conditions have long come under fire from international human rights organizations as well as local groups and the women themselves, some of whom are agitating for better working conditions.

The video and some of Moussa's tweets are embedded below:

2/ If this doesnt stir up a debate in the Arab world about the way we treat domestic workers, then I dont know what will.