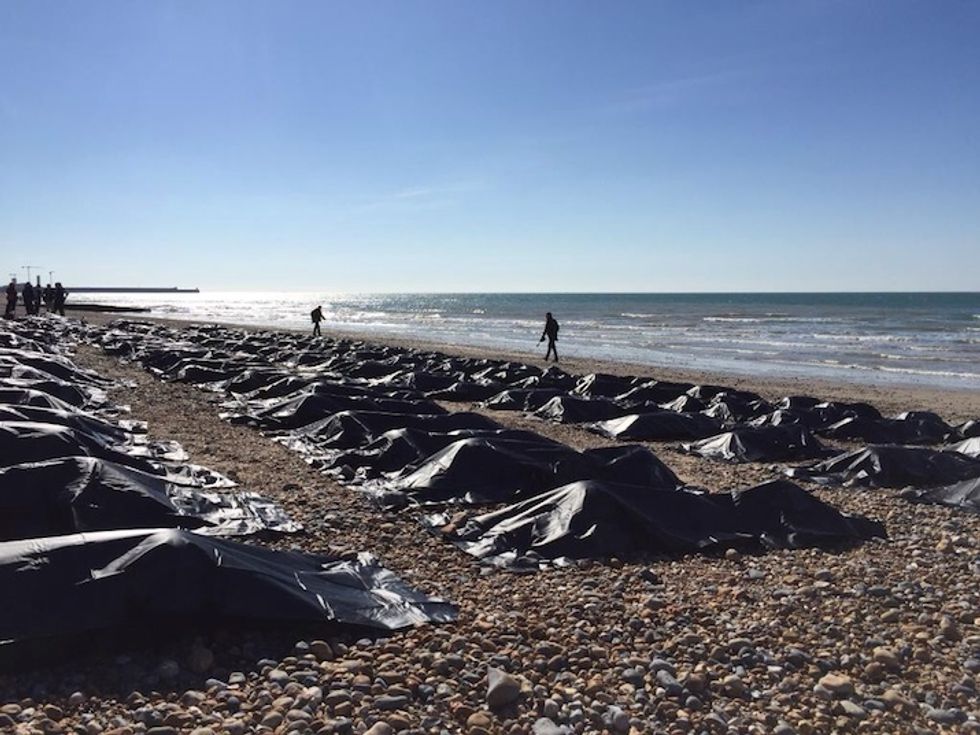 Musa Okwonga reflects on the migrant drownings in his poem, 'Hundreds Of Cockroaches Drowned Today.'

It was just as well they died at sea – no-one holds funerals for beetles,

this way there’ll be less of a mess.

In the old days, we used to buy the cockroaches,

Bring them over the oceans in slightly safer ships,

And we’d have them work in our fields,

Snipping cotton for us as the sun seared their shells.

Here’s a secret; the cockroaches have never swum too well.

Back then, we’d throw the sick ones over the side

but now money drowns them,

And we smirk as their brown lungs fill with salt and silt,

We sing as they sink.

The piece is a somber reflection on the hundreds of people who died last week attempting to flee their home countries for Europe as well as the thousands who have drowned before them in the Mediterranean. According to Kenan Malik, it is estimated that some 20,000 migrants have died trying to cross Europe’s southern borders since 1993-- though the true figure is likely much higher due to many deaths going unreported. According to Amnesty International, 50 times as many people have died since the beginning of 2015, compared to the same period last year.

In the poem Okwonga takes on the perspective of Katie Hopkins, an editor at The Sun, the UK's most read newspaper, who penned an article comparing migrants to "cockroaches" last week after the sinking of a migrant vessel in which 400 people drowned. Now, a petition with more than 200,000 signatures is calling for Hopkins to be removed as a columnist. Below, Okwonga explains his full inspiration for the piece.

"I was inspired to write this poem upon seeing that yet another boat had capsized in the Mediterranean, leading to the deaths of hundreds of people, and then asking myself 'I wonder what The Sun would think about this'. The Sun, Britain's most widely-read newspaper, had published a column just a few days before this tragedy which had horrified many readers. The column's author, Katie Hopkins, had suggested that people fleeing the conflicts in Africa by boat should be turned back by gunships, because, 'like cockroaches', they were resilient enough to deal with such rejection. That phrase, 'like cockroaches', struck me as the kind of language that Nazis might have used to describe Jews - like vermin, an infestation to be done away with. And so I wrote this poem from the perspective of The Sun, its editors and Katie Hopkins; but also from the perspective of those who, throughout history, have treated Africans and other people of colour as something far less than human. I often write poetry when listening to music, and a Twitter user - @doriangrayskull - had sent me a track that same day which was both stirringly beautiful and heartbreakingly appropriate. (The track, 'Lampedusa', was written and performed by Toumani and Sidiki Diabaté.) I bought a copy of it online, put in my headphones and began to write, trying to capture as much of its emotion as I could. And that's how the poem ended up: a collaboration between the glee of The Sun, the mournfulness of this instrumental, and my own fury."