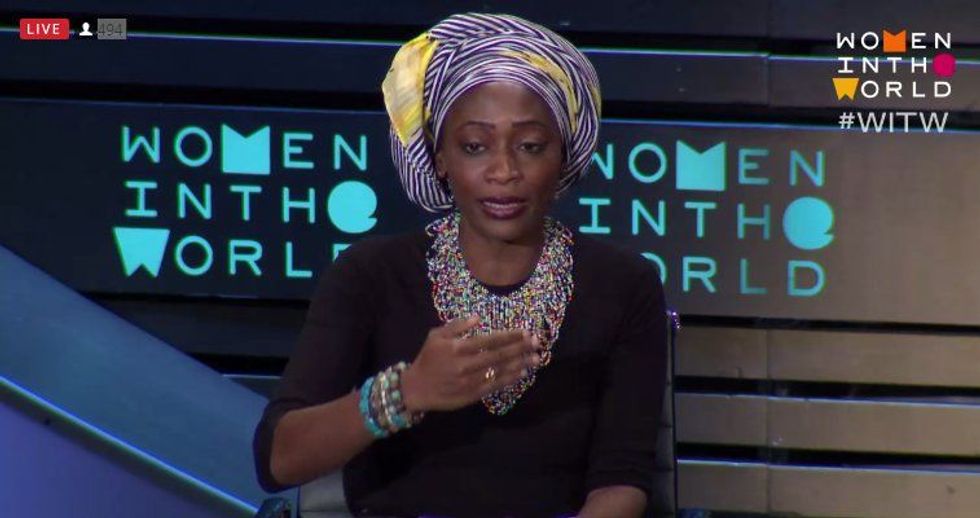 An op-ed from OkayAfrica's associate editor on her experience at the Women In The World Summit, where only two African women were involved.

This week, I had the opportunity to attend the eighth annual Women In The World Summit at the Lincoln Center to experience and witness the Africa-related programs. The three-day affair presented "powerful new female role models whose personal stories illuminate the most pressing international issues."

Presented by Tina Brown Live Media and in association with The New York Times, attendees have been in the presence of top notch women of impact including Hillary Clinton, Oprah Winfrey, Malala Yousafzai, and make a point to include men who champion women, like this year's guest, Canadian Prime Minister Justin Trudeau.

When perusing the agenda, I noticed that only two out of the 31+ talks at the Summit involved African women. To be fair, there were women of color who have been changing the game in their fields like Tracee Ellis Ross, Queen Latifah and Joy-Ann Reid; as well as women who came from far and wide to particpate including China, Saudi Arabia and Iraq.

As I walked in to receive my press pass, the production of event amplified the posh David H. Koch Theater with bright lights, a Women In The World Boutique, a lounge courtesy of Toyota and free refreshments and munchies courtesy of Pepsi (lol). It was a corporate company's dream to rub elbows with an occasion such as this—because women rule the world, right?

Before the conversation between Chimamanda Ngozi Adichie and Cecile Richards, president of Planned Parenthood, with Katie Couric called "How To Raise A Feminist" began, there was an a cappella rendition of the unofficial theme song of the Women's March accompanied by a montage of pink pussy hats. From the welcome speech by the Summit's Founder and CEO, Tina Brown, it seems like the march, where millions of women gathered in D.C. and around the world in solidarity to stick the middle finger to patriarchy and Trump was the main theme to reflect on throughout the Summit.

"The activist spirit is in full-bloom—and it's women who are leading the charge," Brown states in the program.

Back to what I came there for—to see Adichie in the flesh. I guess it was cool to see Couric in the flesh too, but I walked away from the conversation disappointed.

The questions for both Adichie and Richards, in my opinion, lacked depth and were repetitive of what we hear and read regarding mainstream feminism and women's rights (from the Western perspective). It was also evident and obvious that regardless of the questions asked, both women had clear talking points they wanted to communicate and pivoted their answers to suit that. Understandably so, since the discussion only ran for about 30 minutes.

I caught myself side-eyeing Couric a few times during the talk, especially regarding her comment to Adichie about Nigerian men as she transitioned to another question:

"Chimamanda, when I was watching your first TED talk, I thought, 'My God, men in Nigeria are really behind the times...' What have you experienced or observed about feminism in this country [America]—are we doing a better job than they are in Nigeria?"

What a comment. What a question. I just could not. Then I looked around me in the press section (where I most likely was the only black person) and peeked below and saw a vast sea of beige and realized that I probably was indeed the only one who felt uneasy hearing that.

But of course, Adichie clapped back with grace:

If you continue to watch the discussion, Adichie is sure to address how black women and women of color feel about feminism in the American context (see: 24:45) and why she labels herself as a feminist as an act of reclamation.

I take issue with her point that black women and women of color are reclaiming the label 'feminist' because it's not only a serious blanket statement, it also doesn't acknowledge how multi-layered and complex black womanhood is and how every black woman's experience is not like the other, which in turn impacts how the label 'feminist' affects them.

Today, I attended the "Daughter of Destiny" discussion featuring Nigerian activist Hafsat Abiola-Costello who was interviewed by documentary filmmaker and journalist, Perri Peltz. Abiola-Costello is the first daughter of Nigeria's first democratically elected president—Moshood Abiola—who was never able to assume rule. Her mother, Kudirat Abiola, was a fierce activist who championed democracy in Nigeria and was tragically assassinated as a result.

Abiola-Costello only had about 15 minutes to share her story.

15 minutes compared to the other sessions that ran at least 30 minutes long. So, of course, the conversation was rushed and, again, lacked depth. Another moment walking away disappointed.

My experience at the Women In The World Summit pretty much confirmed why I don't go out of my way to attend events like this. I don't understand the point of having these grand and fancy events for [white] women to pat themselves on the back, singing several renditions of kumbaya through the tired tropes of heart wrenching and dramatic stories that come from women of color who participated. I would think, especially in our intense climate around the world, that it would be imperative to utilize this moment to drive folks to keep taking action and actually doing something instead of being reactionary.

Access was another huge issue for me. If I didn't have the privilege of obtaining a press pass, I wouldn't have been able to afford to attend. The first time I even heard this event was a thing was last year—and this has been a yearly event for 8 years now. There was a price range for tickets, where the highest priced at $350. So I had to ask myself—with the lack of people of color in the actual audience that I managed to see, who's the intended audience for this? It may not be for people like me.

Lastly, when it comes to actually including African women in these global conversations, what exactly does that entail? Do we have to have a dramatic and compelling story or go above and beyond and be superwoman—or can we not talk about and represent other complex aspects of womanhood too? There are so many African women who are doing the damn thing in conventional and unconventional ways; who have always done the damn thing. Their stories deserve to be heard, too—and we even made a list honoring only 100 of them.