I Think They Pee Standing Up 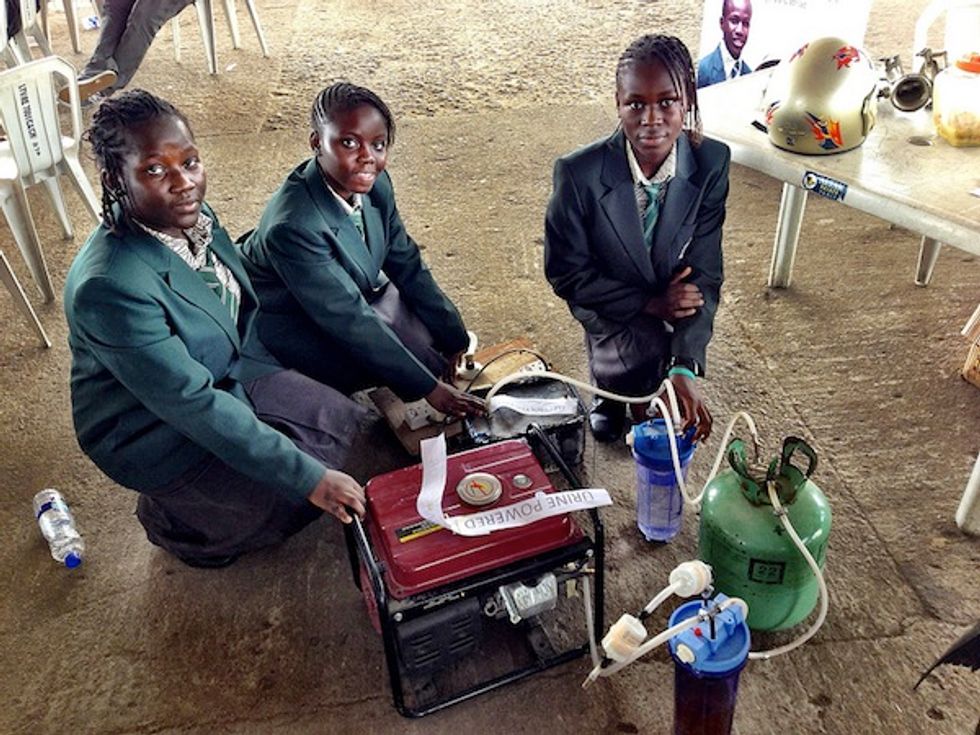 Four teenage girls in Lagos (Duro-Aina Adebola, Akindele Abiola, Bello Eniola and Faleke Oluwatoyin) have created a urine-operated generator. Yes, you read that correctly. Presented at the Maker Fair Africa Lagos 2012this past week, their invention has quickly caught the attention of the media globally. We'd like to think it's because of the significance of four teenage girls creating something that addresses fuel dependency in Nigeria, while also subverting a widespread assumption throughout the world that women "can't do" science- but we have a feeling it might just be that people are simultaneously fascinated, intrigued, and irked by the generator and how it works.

For a country that currently generates between 4,000-5,000 of power for a population of over 150 million (South Africa generates 40,000MW for 40 million people)- Nigeria's energy crisis is definitely not a secret. Reliant on alternative energy solutions, such as power inverters and diesel/fuel operated generators, one might suggest that Nigerians have become somewhat complacent with the government's inability to generate an adequate amount of power for its citizens, or rather they've realized they can't wait for the government to fix the problem and as a response they invest in these alternatives so at least they're not waiting in the dark. (Not to be dismissive of citizens speaking out against the government- Occupy Nigeria was an example of Nigerians voicing their frustrations with the government's inefficiency, particularly in terms of fuel/electricity).

The information available about Nigeria's energy sector via policy reports and analyses demonstrates that the issue is not necessarily capacity, as much as it is policy and incentives (the lack of capacity is extremely profitable for a few Nigerians, say those who import generators, inverters, drill gasoline etc.). People turn to the solutions mentioned above, and while this allows for a somewhat questionable functionality within dysfunction- this urine operated generator addresses at least one of the issues at-hand- reliance upon fuel and its environmental impact.

We're looking forward to hearing how the young girls describe their creative process and how they finally arrived at their invention. The implications of this invention go beyond what they can do for generators- it illuminates that young Nigerians are aware of the problems facing their country and they're not only looking for solutions- they're finding them.