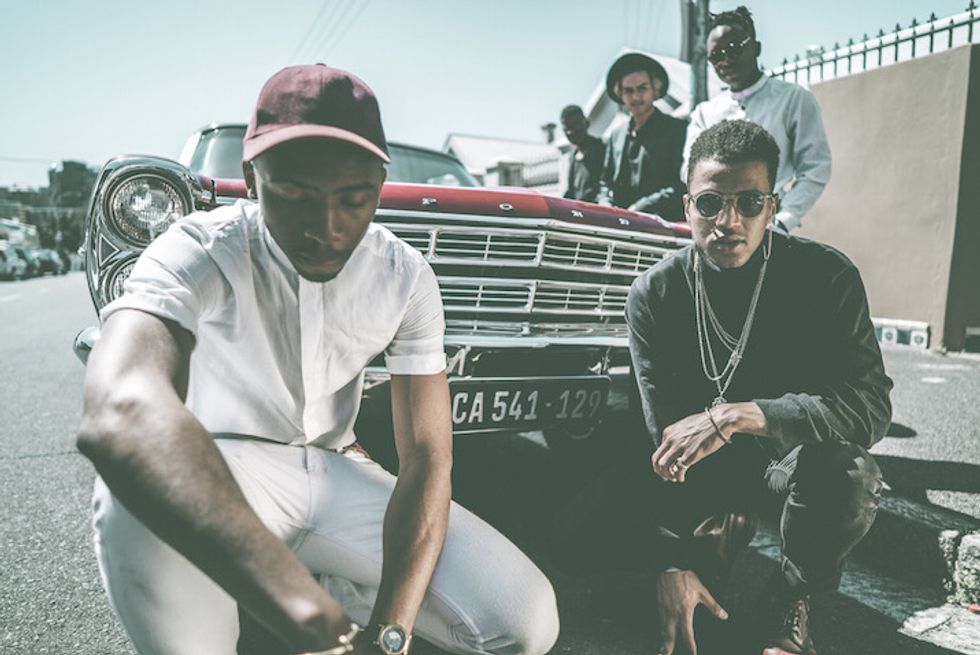 "We are Black. We are proud. And we are striving for excellence," Imraan Christian writes about his latest photo project, Rise From The Roots. "The aim is to subvert and transcend the accepted colonial narrative of a group of black men being dangerous and/or criminals," says the Cape Town-based filmmaker and photographer. "Instead of attacking the already existing narrative," he adds, "we are creating a new space in which we feel proud of our heritage and our potential. We are the context for each other to exist and excel within."

The shoot took place in District Six as an homage to the once vibrant culture of art and expression that defined the area until the Apartheid government forcibly removed over 60,000 people from the neighborhood to the Cape Flats.

Christian says his own upbringing in the Cape Flats is a strong part of his roots and heritage. It was in 2005, when he attended a Model C high school in Cape Town's southern suburbs, that he says his interactions with what he refers to as "structural whiteness" began. "I was always deeply uncomfortable about having to change my natural state of being to fit into a structure that considered me the other," he told Okayafrica over email.

Christian says this same dissonance was transferred into his art when he began taking photographs in 2011 and making films in 2012. "I was constantly coming up against what was 'cool' or 'relevant' as compared to what I intuitively felt was real," he explains.

Recently, Christian says he's finally beginning to feel like his craft is at the point where he's able to express his visions and feeling justly. He's also been able to collaborate with likeminded creatives. "I'm incredibly drawn to artists who express ideologies of growth and transcendence rooted in our indigenous African cultures," Christian says. "The True African voice is rising rapidly, and I hope to be a part of this lifestyle shift, as well as facilate this growth in others who hold the same intentions and aspirations."

With Rise From The Roots, Christian gathered the creative energies of his fellow ToneSociety members, a group composed mostly of multi-disciplinary artists hailing from Johannesburg, Pretoria, Durban, Nairobi, London, France and elsewhere around the globe. "We are all rooted in many different ways of life, and we have found that the intersection of all of our roots lies in the shared fire to build," Christian says of the collective.

Christian also tells us that fashion played a vital role in connecting the group. "We realised that the extent to which we mirror each other aesthetically could not possibly be coincidence," he says.

The shoot is the first in a series of four lifestyle editorials, each with a different aesthetic but one overarching intention: to serve as platform and culture of expression that Christian says is defined not by revolting against the oppressor, but rather, building the voices of the people. "For us, this simple act of being a large group of black males in a public space, with the only purpose of expressing ourselves, feels liberating," he says. "In that space, we feel like our dreams/aspirations/truths are valid because they are recognised in the space we have created for each other. In other words, we give each other context, and the amount of growth that we have experience simply allowing each other to be has been a gift for all of us. In my 22 years in Cape Town, I've never quite experienced something like this, and it's a breath of fresh air for me."

Check out the premiere of 'Rise From The Roots' above. Keep up with Imraan Christian via his website and Instagram.

Rise From The Roots Credits: