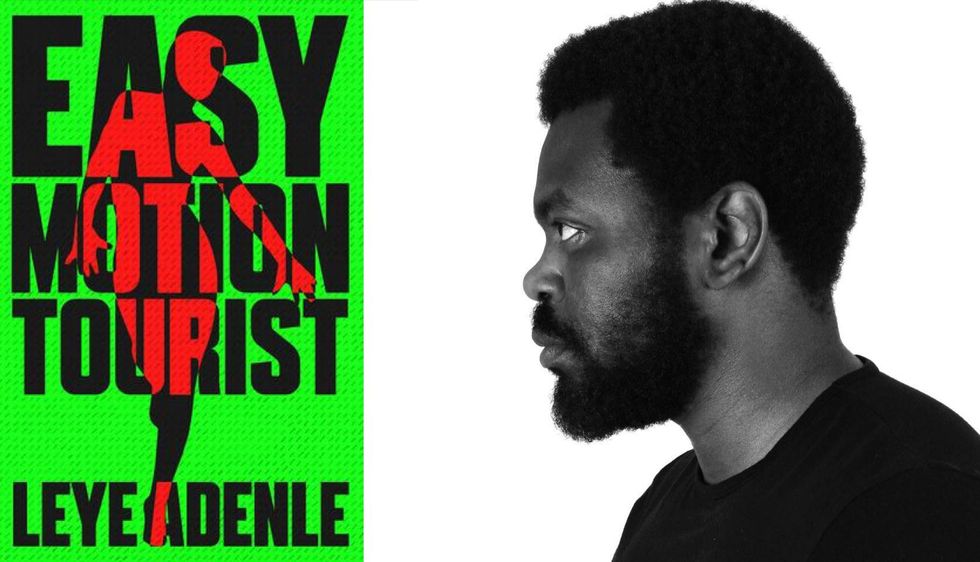 We spoke to the author of Easy Motion Tourist who has written and exciting new novel set in contemporary Lagos.

Leye Adenle’s Easy Motion Tourist is Lagos in prose form. It is primarily the story of Amaka, a woman who is a guardian angle to the city’s sex workers.

When one of her “girls” is found dead, she suspects Chief Amadi, a businessman who is rumoured to have gained his wealth from what is believed to be human rituals.

Guy Collins, a British chancer who she bailed from a police station, accompanies her on her mission, as both dig deep into the seedy underworld of Africa’s populous city.

Easy Motion Tourist won the 2016 Prix Marianne in France chosen from a total of twenty seven novels. I caught up with Adenle in Maloko, a creperie owned by a dreadlocked Cameroonian-French man, and one of very few black owned businesses that have opened in a now gentrified Camberwell.

All symbolic significance between the book we discussed and the restaurant we ate in surfaced only when editing the transcripts.

What fascinates you about Lagos?

Everything about Lagos is fascinating. It's the shifting landscape from the city itself, it's the commotion, the beauty, the music—it's the Motown of Nigeria, of Africa for that matter.

I have not been in Lagos for a couple of years now. Simply because I've had to be in many other parts of the world. I've been in about 5 different countries this year already. I'll be in Lagos as well later this year.

From what age roughly to what age?

Where in Lagos was this?

Mostly on the Victoria island.

Do you think Easy Motion Tourist would have been any different if you had lived say, up to 20 or more of your formative years in Lagos?

I don't really think the amount of time spent in a place should really matter.

Collins “the white man” going in search of new experiences in an African nation is a narrative we are by now familiar with. Did you worry at all that you might be on a well-trodden path?

A black woman, Amaka, is the protagonist. He's not even the antagonist. The thing is, I do understand why for the English speaking world who have access to the English version of the book, there's a tendency to assume often that the book is about Guy Collins.

If you were to look at the French version which is called, Lagos Lady, every single review in the French press gets it and puts Amaka at the center. I think it also says a lot that it seems to be doing a lot better in France.

Is it possible to see Amaka and Collins as individuals with their own agency free from any suggestions that might arise from her being a black African woman and he a male white British male?

I've had discussions with people and people who should know, professors in university, especially a lady in a university in France who talked about how my portrayal of Africa is significantly different from what has become used to and what they are tired of, which is of the hang up with the colonial past, or with the “white savior”, or with issues of race and stuff. You won't find that in my book. What you'll find in my book is a true depiction of Lagos.

Why the title Easy Motion Tourist?

From 2003, it was called Amaka, and it only became Easy Motion Tourist later on in the year. At the very beginning, in fact before that, it was called, 48 Hours in Lagos.

Is it not problematic to typecast an Igbo man as a money hungry businessman who is suspected of using humans for money rituals?

Okay, but are you not taking advantage of these unflattering perceptions of the Igbo business man, even without intending to like you say?

I think it goes a long way to support my position that I'm not worried about it because this is the first time that someone pointed out that.

No, I didn't worry about it because the book is filled with good and bad people of every ethnicity and every color as well. I just wrote about people. I didn't mean offense and in truth, if taken as a whole, there is no offense and none should be taken.

You write dialogue brilliantly and not many novelists, I feel, do that very well. Is this a skill you always had and maybe developed?

I do not sit in front of you and say to you, "Okay, right now I'm enjoying this interview very much and I'm quite amazed by the thought that's gone into the questions, so therefore I'm going to be very participatory in this."

Is there such a thing as Nigerian English?

Nigerians will tell you "I'm coming", when they're leaving.

English no longer belongs to anybody. I don't think it ever did. It's a very strong mixture of several language anyway. Is there such a thing as Nigerian-English?

I think there's a beautiful thing called Nigerian-English which is an attempt, unconscious as it were, to maintain the beauty of some of the traditional languages that we communicate through the use of this common language, English.

What did you make of the Oba of Lagos, Rilwan Akiolu, reportedly threatening, during the 2015 Nigerian presidential election, to make all Igbo “perish in the lagoon” if they don't vote for APC?

That really irks my soul. I really feel bad about it. I remember ranting about this on Facebook as of the time. Even though I'm Yoruba but actually, that's second to being Nigerian. That is second to being human. I think he owes Nigerians, every human being an apology for saying that, but guess what? My opinion doesn't really matter because I'm just a bloody writer.

Except that it does. The reception for EMT in France has been good. Tell us more about it.

For some reason in France, my book seems to be doing well and a lot of people are getting to know about it from other people, from newspapers, from magazines.

It's selling in a lot of bookshelves. I found several copies in the oldest bookshop in France. I think it's doing well there, but we've only sold the French rights and the Spanish rights.

Why do you think the French have taken to it more than say, the British have?

I have absolutely no idea.

Is EMT going to be a series?

I don't know if the right word is series because there's a sequel, but then the sequel is a continuation of the first book, obviously, but there are going to be other books. Some of them will be spin-offs. I really don't know what the definition of a series is.

We're hoping there's going to be about 20 Amaka books.

Will Collins have the lead in any of the other ones?

Maybe it'll become about Amaka and Guy. Maybe it will be called the, Amaka and Guy series, one day, I don't know.

The earliest portrayal of Lagos that's I've read are in Cyprian Ekwensi's short stories and, more vividly drawn, in those of Ben Okri’s Incidents At The Shrine and Stars Of A New Coffee. Are there any that you've read and are memorable?

I wouldn't say anybody influenced me in setting my book in Lagos. It was only a natural thing for me.

Why did you choose to to write a crime novel rather than say, and sorry to use the dreaded word, a “literary” novel?

I expect Easy Motion Tourist to be a very good thriller if adapted to film or a TV movie. Is there talk of a film adaptation so far?

We've had some interest. We've been contacted by some production houses and some directors. We are still on the lookout for a viable proposal to make this into something else, a movie or a TV series or something.

There's only one name Genevieve Nnaji

Good choice. How about Collins?

There's only one person who's face I see when i think of Guy Collins, Jude Law.

How about Amadi the villain?

Would you be alright with a company of non-Nigerian actors and director taking over a film adaptation?

Thank you for this interview.