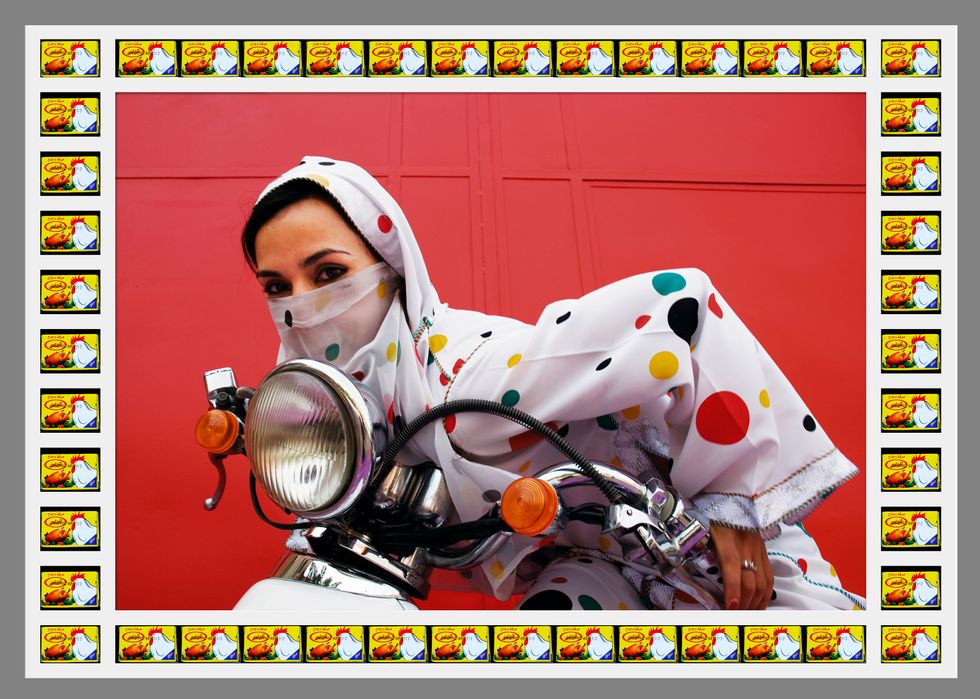 The Moroccan-born artist has a kinship with the subjects in his art works that goes beyond mere words. On the evening I interviewed him at the Somerset House, it was some 20 minutes to 7:00 p.m. when exhibitions would closed for the day. Hajjaj asked to postpone the interview while he sat to watch a run of Rock Stars with one of the featured artists who had arrived to see the work.

What at first might seem like courtesy from one artist to another soon took on the form of solidarity and appreciation of each other's gifts which could be lost on the many who trooped in to see La Caravane.

"If you go anywhere around the world, you're going to find incredible artists," Hajjaj explains, "they're known local and they're surviving what they do, on what they have and for me they're the real artists."

Rock Stars: Volume Two is a set of nine screen installations of different artists that includes a soul singer, performance poets and a belly dancer all of whom perform their art in a sequence of short recorded clips that build into a montage that is looped.

Each artist is dressed by Hajjaj in outfits of bold patterns and colors, and framed by cans of popular everyday products from brands that would be immediately recognizable most people, even when labelled in Arabic.

The first volume of Rock Stars, which also featured a diverse group of artist-friends, was shown in the Los Angeles County of Art (2014), New Jersey's Newark Museum (2015) and Memphis Brooks Museum of Art (2016).

La Caravane will also continue beyond the annual art fair and through the winter season at the Somerset House until January 2018 and Hajjaj is aware of just how significant his homecoming exhibition will be not just for himself: "I knew I had to carry the flag for 1:54 and the African continent. This was important. So whatever comes here had to be museum standard of work."

Gang Of Marrakesh, photograph by ©Hassan Hajjaj, courtesy of the artist and Vigo Gallery.

La Caravane occupies all three rooms that make of the Charles Speechlys section of the gallery. The first is a selection of works from Kesh Angels, perhaps the best known of Hajjaj's works, a series of stylized photographic prints depicting Moroccan women in djellaba and posed behind motorcycles. Each photograph has, for a frame, stacked cans of consumer products commonly used in Morocco with descriptions in Arabic as well as in English from carbonated drinks to processed food.

If one's perception of women in traditional Islamic garments and some Arab societies is that of female disempowerment, Hajjaj's harmonized vision of glossy aesthetic, Moroccan traditions and street culture not only disrupts such notions, but reconstitutes them into singular, complex images.

"Kesh Angels is a classic type of work that became popular on social media," Hajjaj says. "It's like a 20 year story that I've been shooting. I've only probably showed only 10 percent of the work."

One food brand Hajjaj has used to frame his work goes beyond any commentary on consumerism or decorative value.

Some of the brands Hajjaj has used to frame him work could be read as commentaries on global consumerism and some are simply decorative, except one for canned tomatoes brand, called Aisha, which has a deeper significance: "I use them a lot because my mum, God bless her, she liked them a lot. Her name was Aisha so as to keep the memory."

Take a look at more from La Caravane below.

Khadija, photograph by ©Hassan Hajjaj, courtesy of the artist and Vigo Gallery.

Kesh Angels, photograph by ©Hassan Hajjaj, courtesy of the artist and Vigo Gallery.

Abimaro & Lakwena, photograph by ©Hassan Hajjaj, courtesy of the artist and Vigo Gallery.

Mimz, photograph by ©Hassan Hajjaj, courtesy of the artist and Vigo Gallery.

Hindi Rockin', photograph by ©Hassan Hajjaj, courtesy of the artist and Vigo Gallery.