The Students Fighting to Decolonialise Music and Dance in South Africa 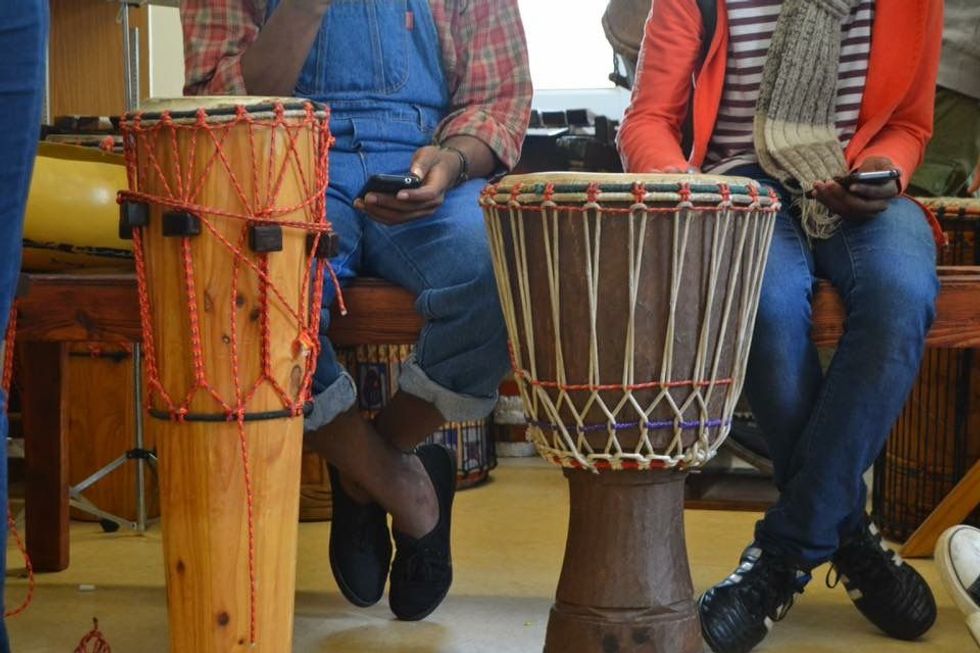 We speak with Inkqubela, the group of music and dance students in Cape Town pushing for free decolonial education.

Critics of #ScienceMustFall are loud and clear: science is a neutral exercise, exempt from decolonisation.

Of course there are successful counter-arguments, shared in response to the social media rage that ensued after a video of a University of Cape Town student—who declared science must be scratched as a whole because it’s a product of Western modernity—took centre stage.

The infamous #ScienceMustFall clip—which is sitting at just under a million views since it surfaced last month—was an excerpt from a more nuanced, two-hour-long discussion on this topic, and was inspired by the #FeesMustFall movement’s call for free, decolonised education in South Africa.

In September, student protests flared up for a second year in a row following an announcement by South Africa’s Minister of Higher Education, Blade Nzimande, that it would be up to the individual institutions to decide if they’ll raise fees, with a recommended 8 percent cap. The following day, universities shut down nationwide, private security was ordered on campus and, although the media often had you believe the protests were mindless, decolonisation was repeatedly discussed in panels and papers.

How music and dance pertain to decolonisation was one of the less public debates, but it still deserves attention. Science’s subjectivity may lie beneath the surface, but surely, most people would agree that the arts are highly personal and deeply expressionistic practises, full of history, culture and politics. Especially in South Africa.

Songs like Vuyisile Mini’s “Pasopa nansi 'ndondemnyama we Verwoerd” (“Look Out, Verwoerd, Here Are the Black People”)—which disguised an incendiary political message with a happy melody—are examples of how music took on a specific form because of its existence in oppressive circumstances.

Kopano Maroga, a dance major at the University of Cape Town, feels strongly that art can’t exist in isolation. It’s part of a multi-faceted experience, and the role of music in the current student protests is no different. “When people are protesting, it’s an embodied act, it’s a sonic act, it’s a political act, it’s a social act, it’s a personal act… it’s all,” says Maroga. Yet in his classes, students are encouraged to exclude politics from the conversation. “It’s art for art’s sake,” the argument goes.

Maroga is part of a group of UCT music and dance students who are engaging in conversations around decolonial education at the South African College of Music and UCT School of Dance. Their collective goes by the name of Inkqubela—Xhosa for “progress”—and is kind of like an alternative university, counteracting what they see as a singular approach to education by exemplifying a better way of how things can be done.

Apart from starting negotiations with faculty, their project consists of spiritual and intellectual aspects, which feed into each other. “There are meetings,” Maroga says, “where we wouldn’t know what to do with ourselves and we would just start singing a song, and the clarity of purpose would coalesce.”

They would, among other things, organise creative jams involving instruments like the mbira and Southern African bow alongside more traditionally “Western” instruments. They’d also invite guests, like indigenous music improvisers Jethro Louw and Garth Erasmus, to share their thoughts.

It all started when, during the shutdown at UCT, their drums are said to have had a healing and revitalising influence on fatigued protesters. To elucidate the therapeutic effect, Marco John Titus, an opera major and Inkqubela member, explains that lingering remnants of apartheid evoke inter-generational trauma and Post Traumatic Slave Syndrome (PTSS). “Sonically,” Kopano clarifies, “you can access that pain.”

Besides creating a healing environment, Inkqubela have some resolute and tangible objectives for decolonised education outlined in their memorandum. After stating their commitment to the broader student movement, such as the demilitarisation of campus, #FeesMustFall, #BringBackourCadres, #EndOutsourcing and #ShackvilleTRC, they focus on goals that are specific to SACM and the UCT School of Dance satellite campuses.

To start off with, they would like the two to be merged, because, Maroga says, “When someone sings, it’s also an embodied performance. It’s an unnatural annexation to have one art form removed from another.”

They’d also like to see the establishment of a psychological support system, and a fund that ensures no students are financially excluded. Curriculum-specific demands are, for instance, that outdated prescribed readings, where black people are still referred to as “negroes, natives, kaffirs etc,” should be reviewed, not just from an obvious ethical standpoint, but for quality. Or that the jazz stream needs to focus on South African jazz musicians.

According to the memorandum, in three years of jazz improvisation classes, only one South African composer, Bheki Mseleku, is covered, and only to the degree that his work is comparable to the American jazz standard “Giant Steps.” Inkqubela also recommends the addition of a music sociology component at the undergraduate level, so musicians can understand their position in society.

For the collective, the apolitical approach to education sacrifices the vocational duty of art for aesthetics that get “bums on seats.” The most profitable outcome isn’t always the most considerate. At the very least, society’s inequalities and an individual’s diverse abilities and background should be acknowledged.

“Musicians don’t just arrive at their instruments and begin playing, you know. There’s an entire life that is attached to that process. And it gets written out of the way that music and dance gets taught. We’re just expected to arrive and sing,” says Maroga.

Decolonisation, he says, is driven by “a politics of care,” and a “rhizomatic process.” “Rhizome” is a philosophical concept developed by Gilles Deleuze and Félix Guattari that—as opposed to the hierarchical tree model—is based on the botanical rhizome, which recognises multiple factors. The theory rejects a chronological process, in favour of one that has no specific origin or genesis. Imagine a multi-faceted spider web, with lots of colours, shapes and patterns, representing all the different ways we understand each other and the world.

It’s thus not about scrapping “Western” instruments either. “I don’t think any of us are interested in having a surface level conversation. Like if you are in this space, you must only be playing a djembe. It’s not an ayahuasca ceremony,” Maroga laughs. The very idea of ownership needs to be contested.

As an example, they mention the #FeesMustFall struggle songs. Just like many anti-apartheid songs didn’t have an initial arrangement, John Titus and Maroga say that it would be impossible to write an anthology for their protest songs. They would constantly be “remixed” and there is no one person who composed a song. “There’s such a complex network of where things come from. We don’t talk about the genesis of things enough and in a way that is plural enough.”

The idea of knowledge-producing being inherently European, or inherently colonial, represents the same problematic rationale, explains Maroga. “Those spaces have been present in Africa for hundreds of centuries. Wherever there are people, knowledge will be created. It just so happens that this particular format was borrowed from Europe and imposed into this space.”

Because Inkqubela’s ideas are so different to the way our current system operates—in a commodity-driven, bureaucratic and strictly hierarchical manner—their engagements with faculty members have been difficult. Often, Maroga says, they are not versed in the discourse, and too trapped in the system to be able to effect change. But as long as the capitalist production line stands in the way of Inkqubela’s vision for music and dance, their fight for a rhizomatic, decolonised future will continue. Even though, at least at this stage, they might not be able to say how exactly it will look like. “That’s the beauty of it. Coloniality presents itself as all-knowing, omnipotent. Decoloniality is let’s play and make some shit.”

Christine Hogg is a freelance writer, co-founder of The Subverse and script editor. Follow her on Twitter @christinebeme.