'Insecure' S2 E2 Recap: What We Should Do and What We Actually Do Aren't Always the Same Thing 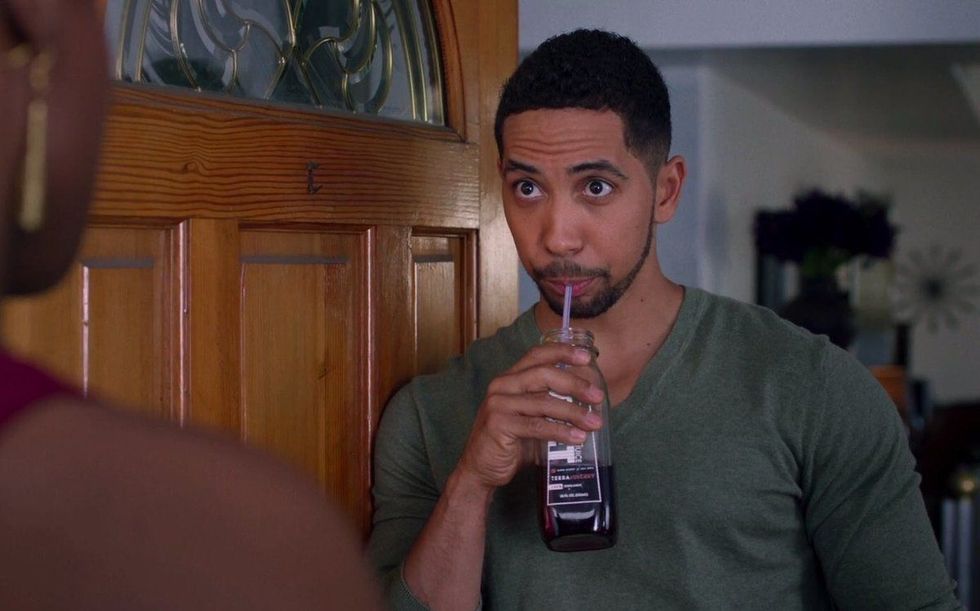 Here's our review on the second episode of Insecure's second season.

ICYMI, here's the recap for Episode 1.

Once again, Insecure proves to excel at pinpointing relatable, universal issues, dissecting it in a quiet, stylistic way and ultimately pulling at our heartstrings. It's effective because these characters feel like people we know, or remind us of ourselves, even if we haven't been in their shoes. We never have to guess what they're thinking because it's written on their faces, or heard in the silence between their pauses, or felt in the way they touch, or don't touch, each other.

It’s in the way Molly realizes that penetrating the “boys club” will be harder than she thinks, after she tried to bring up a joke she shared with one of her employees at a hockey game, only for him to dismiss her and leave her awkwardly holding a mug of coffee. It's in the way Issa and Molly communicate with their eyes: especially when they learn about Tasha, Lawrence’s new—not sure what to call her. It’s in the way Issa looks at herself in the mirror. Issa’s reflection has been a reoccurring motif throughout the show, a way for her to confront her insecurities, her dark side, her fantasies and her imaginary personalities.

Issa thinks that she may still have a shot with Lawrence, and tentatively but excitedly, tells her friends (Molly, Tiffany and Kellie) that they are on the mend. It's classic Issa: speaking too soon, dreaming out loud, being more optimistic in certain situations that beg for more realism. Can you blame her? She’s been with Lawrence for 5 years. But Kellie quickly reminds her that 2 of those years, Lawrence spent on the couch (it’s so easy for some to blame Issa and Lawrence’s downfall on her infidelity, and not his faults as well. But I have a feeling this will come up again in an a later episode, so hopefully we can revisit this conversation).

Issa’s realization raises new questions about emotional cheating and sexual cheating.
Molly also dreams out loud, but her therapist points out that her dreams are propelled by the word, the idea, “should.” That her life should look and feel a certain way because she's checked off so many boxes: successful, educated, good looking, ambitious, independent. But her therapist challenges her to imagine a life where things don't go the way she imagines it to, but rather, the natural, realistic way that it ought to. Molly ran into this problem last season with dating: she had a certain image in her head of what her dream guy should be like, and when she actually found someone she could genuinely vibe with, she ruined their relationship because he didn't fit the outline of her ideal man.

But what I can respect about Molly is her persistence. She tries to ease her way into the “boys club” at work by attending a hockey game. Molly is extremely socially flexible, so she’s able to move within certain circles seamlessly. But it’ll take more than one hockey game for her to really leave an impression. However, it's great that Molly reaches out to another person in power in her field and expresses interest in learning from them—this time, a woman. I’m hopeful that this will be a more productive move.

Speaking of work and impressions, there’s a brief yet complicated storyline about work, morality and race that occurs between Frieda and Issa. A vice principal at a school that We Got Y'all partners with holds some prejudice, problematic views. Issa believes that since she and Frieda are positive influences on the kids (and because they want to keep We Got Y'all up and running) that his racial insults shouldn't matter. Frieda feels differently, and wants to write him up right away (she felt so bad about it that she watched 13TH and tweeted Ava Duvernay). There’s obviously some fun being poked here about how some woke white people process racism, but there’s also some truth to this situation, and exposes the complexity of how “isms” and prejudice towards others arise within communities of color. Frieda asks Issa if she would feel differently about the principal if he were white, and not black. This question feels heavy handed, and there's much to unpack in this scene, but overall, it started an internal conversation with myself about prejudice and if we are more lenient about it depending on who or where it's coming from.

Lawrence is conflicted about sleeping with Issa, and decides to come clean to Tasha. This is one of the rare moments where Tasha is humanized and not merely depicted as someone waiting on Lawrence: she gets upset, rightfully so, and tells him to leave. At this point, it's hard to tell if Lawrence is more confused about 1) sleeping with Issa, because he isn't sure if he wants to close the doors on their relationship, or 2) beating himself up for hurting Tasha. Meanwhile, Issa tries contacting him, visits his friend’s place and starts stalking Tasha’s Instagram, until she finally connects the dots and realizes that Lawrence and Tasha knew each other long before they had broken up.

What’s more interesting is that Lawrence essentially did to Tasha what Issa did to him: he slept with his ex.
Issa’s realization raises new questions about emotional cheating and sexual cheating. Both Issa and Lawrence felt like there was something missing within their relationship (Lawrence wanted support, Issa wanted too many things to list), and looked outside of the relationship to appease that void, except that Issa’s actions were a lot more painful and detrimental to the relationship. On Lawrence’s end, he was spending time with Tasha and growing closer to her, even if he thought they were just friends. Growing closer to someone outside of an existing romantic relationship can definitely hurt the relationship, especially if one isn't being completely open about problems they're having with their partner. And guess what—Lawrence did end up with Tasha. Was something deeper brewing there all along? After last night’s episode, it seems like the writers want us to see Tasha as more than just a rebound.

What’s more interesting is that Lawrence essentially did to Tasha what Issa did to him: he slept with his ex. Yes, Issa and Lawrence had a stronger, longer relationship, so her actions were worse than his, and yes, Lawrence and Tasha never claimed they were official, but, he still stepped out of whatever situationship he’s in with her to sleep with Issa. It was still an intense, impulsive sexual moment that ignited because of his leftover feelings for someone he was committed to. He also ghosted Issa the same way that Issa ghosted Daniel. Yet, the energy that Lawrence is putting into Tasha to make what they have work, is easily the same energy he could direct towards Issa to repair that relationship. Which, again, makes me wonder if there is something more meaningful brewing between them, OR if Lawrence is just really, straight up, confused. (There’s also a terrible double standard illustrated here: women take back men who cheat, but men can't even hear a woman out if she cheats on him. Lawrence never gave Issa a chance to talk, but when he apologizes to Tasha, she invites him back into her home.)

Although Issa and Lawrence can't get it right with each other, or other people, it seems like the truest relationship of the show is Molly and Issa’s. Molly is a very good friend, y'all. She lingered around Lawrence’s job just to “run into” him and directly find out what his deal is with Issa. Unfortunately, she wasn't able to share good news with Issa—Lawrence said he’s done—but if it weren't for Molly, Lawrence would've probably left Issa hanging out to dry. And I'm sure some of you will read this and say that that's what Issa deserves, but it is never okay to punish someone who loves you because they hurt you or betrayed you. Pain isn’t appeased by causing more pain.

When it comes to Issa, Molly goes out of her way to be a true friend. She genuinely wants Issa’s reality to match her fantasy, even when it means cleaning up Issa’s messes. Molly is a real one. And as Issa truly begins to accept, and enter, this new phase of her life post Lawrence, I'm excited to see how their friendship grows.

What I'm looking forward to: Cheers to Issa entering a hoe phase! I just hope she enters it wisely and responsibly. And yes, I say “hoe phase” with the utmost respect.