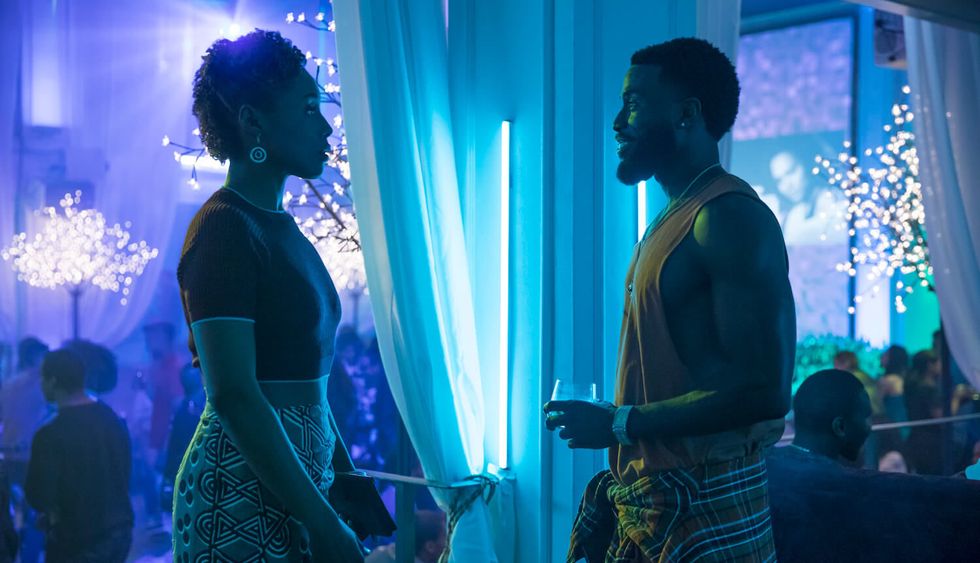 Episode 4 of 'Insecure' was A LOT—here's our recap to make sense of it all.

ICYMI, here's the recap for Episode 3.

Kissing and grinding: two instinctual, hopelessly human acts that can become super sensual or go completely astray. Kissing and grinding—it can be the match that ignites a new experience between two (or more!) bodies, or it can burn them down to ashy, disintegrating embers, waiting to seep into a new fling. Or it can just be nothing, if you over think too deeply, instead of choosing one of these verbs to act on.

Although sometimes, choosing neither can lead to a successful outcome, like Issa, who doesn’t kiss or grind in this episode: she simply walks into the scarlet booth her unresolved ex-lover cooly sits in. Walking back into someone’s life is as powerful as walking out of it: a move is made, a match struck or blown out.

The setting of “Hella LA” is a Kiss N Grind event, a day party that I’m assuming should lead to people kissing and grinding in bed, or on dance floor at the very least. Our beloved characters actually perform—or neglect to perform—one of these actions throughout the episode, which turns this event into a verb-a-thon instead of a place.

Issa, our newly knighted hoe, heads to Kiss N Grind in hopes to widen her roster of potential fuckables. There’s Felix aka CatBae, the dude she found online that she’ll meet in person at the party, but she’s anticipating snagging new guys at the party as well, just in case Felix isn’t all he’s cracked up to be (he isn’t—“Your hair is different in the picture...you ever switch it back? Does your voice always sound like this?” He inquires, as if Issa catfished him.) This is resourceful thinking—she’s literally building her little black book, or contact list, I should say. But instead of meeting new guys, she spots a nonchalant, still-foine Daniel, and immediately approaches him and attempts to apologize. In a gorgeous moment of indigo lighting and glowing white bulbs, we’re reminded of the spectacular sex scene they shared last season in his cerulean toned music studio. But this time, there is no connection, no climax, no cosmic energy—instead, he seems over her, and she awkwardly walks away after singing the “Living Single” theme song.

Sometimes you really have to step outside of your comfort zone to experience something wonderful, and learn something new about yourself and what you want in a romantic partner.
Molly, our boujie braveheart, is vibing out with Dro, the humorous, willowy childhood friend she ran into last week at the cupcake shop, who also happens to be married. The two grind on each other, before Molly cuts it short and reminds him he’s married. But :angels sing: he’s in an open marriage! “It’s a lot of pressure to be all things to one person,” he says. “It isn't cheating; We’re very honest with each other. Isn’t that how relationships work?” Progressive AF.

I, for one, have not been in an open relationship before, but as a woman who is using intersectional feminism to undo a lifetime of unfair sexist cultural and social conditioning, I support and understand people who choose to be in open relationships. Practicing it, however, is another matter, especially in Molly’s position, as the person outside the open relationship. I sympathize with her hesitance, because she seems to have her personal values about marriage and strict expectations for relationships. But as her therapist said: what will Molly do when she’s faced with opportunities that do not typically relate to the life she sees for herself?

I want Molly to give into this opportunity. Rarely do we grant ourselves the permission to indulge in unconventional and tempting romantic or sexual experiences that could possibly blossom into exciting and life-changing moments. We hold ourselves back, because we get so caught up in social norms that dictate what we should believe, how we should live and how we should love. Sometimes you really have to step outside of your comfort zone to experience something wonderful, and learn something new about yourself and what you want in a romantic partner.

This doesn’t mean Molly should fall in love—it means she should allow herself to let go and have fun, especially if this couple has already arranged a new set of rules for their relationship that works. Their marriage is probably rock solid, because they grant each other the freedom of sexual exploration and have built strong, honest communication. Monogamy doesn’t work for everyone, just as polyamory isn't for everyone, but perhaps we could all be more open to alternative relationships before judging or writing them off.

The only character who grinds with full abandon is Kelli. In the closing scene, her new boo fingers her under the table. I’m happy for the kid! She hasn’t gotten much action so far, and I hope she got to do more as the credits rolled.

Molly, hesitant and over thoughtful, denies Dro’s invitation to come over, while Issa, impulsive and intuitive, walks into Daniel’s booth. While Lawrence makes Issa contemplate difficult questions about relationships and her future, Daniel has always inspired Issa to take risks and go after her true passions. And Molly, yet again, gets in the way of her own true desires, leaving her heart lonely, bed vacant, pussy dry.

“Hella LA” not only succeeds at exploring nuanced conversations and complicated millennial adventures, it displays the differences in Molly and Issa’s willingness to enter romantic grey areas. “Entering grey areas isn't easy, but there can be something beautiful about existing in that space,” a close friend of mine said to me recently. I've dabbled in the murky deliciousness of grey relationships, and I've also chosen other colors when faced with this perplexing pigment. Whether we choose to step into the grey or not, it’s important to acknowledge what it says about our romantic tenacity, and our ability to accept whatever consequences come from giving into our greatest desires—or turning them down.

The morals of this episode: kiss and grind 'til your pussy is content (but not at the expense of someone’s skin color) and “Lion King” is still hella relevant to our generation.