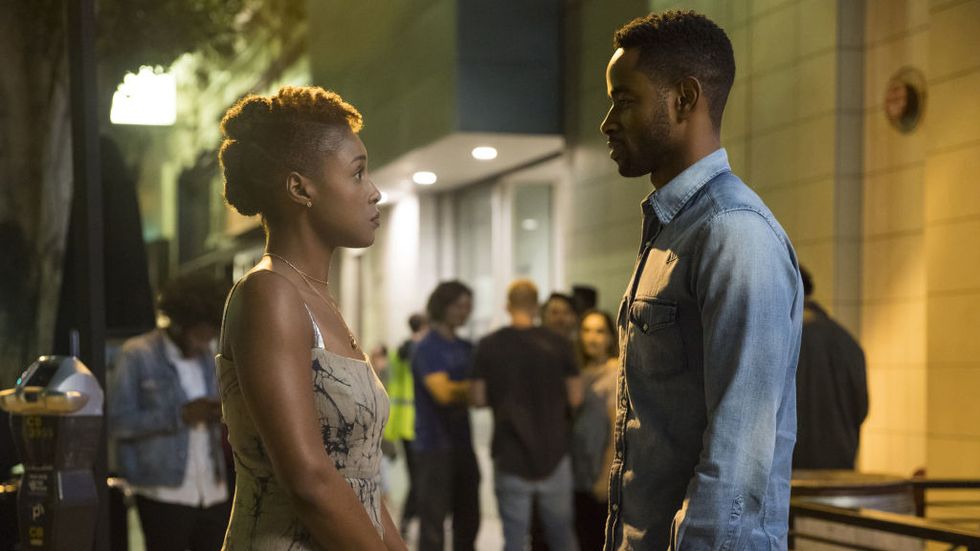 We see Insecure accurately display how men and women are socialized to process breakups differently in episode 7.

ICYMI, here’s the recap for Episode 6.

It started with a birthday dinner party, planned by the perfect, primped and pretty Tiffany and Derek, the only “stable” couple of the show. They orchestrate the perfect setting for things to fall apart: in their world, secrets are swept under the rug and curated into a glamorous facade. While Molly squirms in her seat because her lover and friend Dro is accompanied by his wife, Issa cringes at the sight of Lawrence and his new boo, Aparna, who he obliviously brings to the dinner partner. “Oh...I didn’t know this was a sit down kind of party…” he stumbles, and I am reminded of how often nice guys feign innocence.

Even if Derek’s party was an actual party, with more people, music and space, it still would’ve been awkward and tensious for Lawrence to bring Aparna. Why? Because it’s usually awkward and tensious when you bring your new boo around your ex boo, especially with all your mutual friends around. Lawrence continues to perplex me, because I haven’t seen as much growth in his character as I would’ve hoped. Issa, our protagonist, is undoubtedly growing in more ways than Lawrence is, and that’s because she is processing their break up head on, while Lawrence is bouncing from new relationship to the next. Issa’s growth is painful to watch, because we can relate to her suffering, grief and rejection. Lawrence’s come up feels premature, undercooked and effortless: new romantic opportunities pop up every time he turns his lovely, lithe neck around. Does he know what it means to be alone?

Insecure accurately displays how men and women are socialized to process breakups differently. Women are encouraged to process their pain for as long as we need, to cry in our best friends’ laps and purge over ice cream and wine, and men are influenced to bury their emotions, to push away thoughts and wear a “fuck it” mask.

While Issa is seeking sexual fulfillment, admitting to herself that she isn’t ready for a relationship and allowing herself to feel the emotional gravity of losing a 5 year relationship, Lawrence is taking a different, more urgent approach to moving on. Understandably, he got cheated on, so it makes sense why he wants to move past things quickly, but he isn’t processing the pain in the healthiest ways. Blocking Issa on social media, moving out and dating other women are the logical steps to moving on, but it has also shrouded him in willful avoidance. Yet, I can also argue that Issa’s method of confronting her emotions and the reality of the breakup has also left her standing in place: she needs to get out of that tainted apartment and start anew, which is alluded to at the end of the episode, when she trashes her place moments after receiving the rent increase notice. She also needs to get rid of Daniel, who is yet another Horcrux from her relationship with Lawrence.

Issa breaks down in “Hella Disrespectful,” but before she does, she tries to make some things right. She patches things up with Frieda, her friend and coworker who challenged her to make We Got Y’all more inclusive. This is successful on their level, but when she approaches Principal Gaines, he accuses her of using an “All Lives Matter” tactic, then distastefully jokes that “no one is dead,” as if Issa’s persistence is in vain.

Then, Daniel tries apologizing for busting in her face, only to take it back by suggesting that they’re even now. “You’re saying you were trying to get back at me? You did this on purpose, on some fucked up revenge shit?” Issa accuses. “It’s not that deep...I’m just saying...now you know how I felt.” Hmm—"itch I needed to scratch” versus human baby-making fluid on the face and eye—that seems like a rough comparison. Issa tells him to never hit her up again.

Insecure accurately displays how men and women are socialized to process breakups differently.
Yet, Issa’s worst blow comes from Lawrence himself, who not only brings new boo to the party, but he curses out Issa in the process. After going a whole season without saying more than a few words to each other, their first true interaction post break-up and post confusing-10 second-fuck is...horrible. They manage to say almost everything they’ve held inside in less than 2 minutes: Issa brings up him blocking her, fucking her while dating Tasha, Woot Woot and supporting him during his depressing state; Lawrence talks about Issa still fucking Daniel, accuses her of cheating on him with multiple guys and flat out calls her a ho. She is visibly broken by that word: ho, a word she’s been trying to reclaim all season long, used against her by the one person she betrayed. When rolled off her lips, the word is empowering; when it shoots from his mouth, it is filled with disgust, accusal and pain.

Molly struggles with these ideas and more, as her open relationship with a married man parallels the betrayal she feels from her father’s secret infidelity, her mother’s choice to stay, and her personal dreams of true love and commitment. After Molly fucks Dro in the bathroom in the middle of the party, he asks her to wait a few moments before coming out, as he doesn’t want to make it obvious that they were together. This is the defining moment where her relationship with Dro doesn’t feel like a polyamorous fling: it resembles an affair, the warning a man gives a side piece before stepping back into his reality.

There’s a moment of silent caretaking in this episode exchanged between Molly and Issa. They continue to prove that, even when they get on each other’s nerves, or judge one another’s decisions, they always have each other’s back. They always know when the other is hurting, as if they speak a secret language. The two women stand outside the bathroom, fixing each other up. Issa shuffles Molly’s bangs, straighten her dress. Molly, noticing the tag hanging from the side of Issa’s outfit, lovingly yanks it off. “I was gonna return that,” Issa mumbles. Molly hands the tag back to her. If only we could return painful memories, fucked up words and awful dinner parties just as easily.