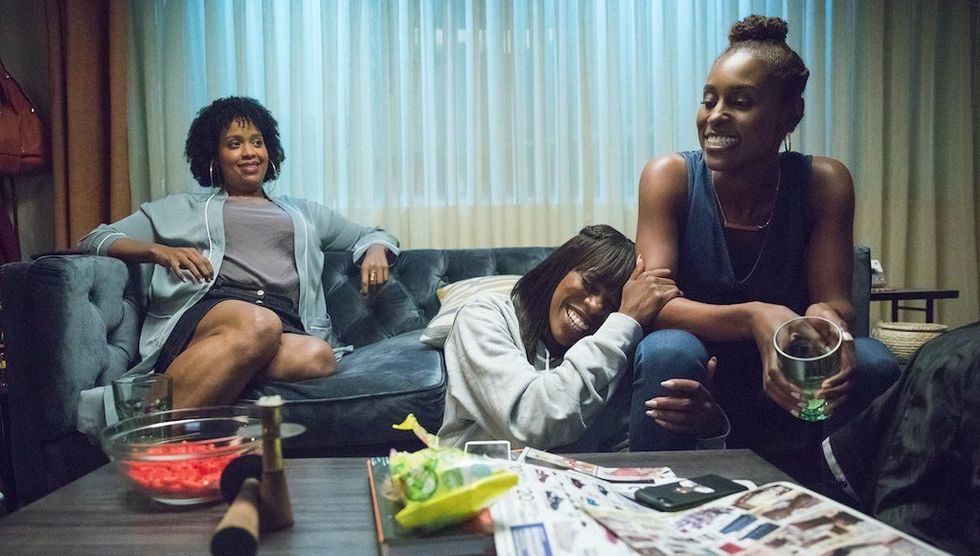 Insecure's season finale, sees its main characters grow and have real conversations, all while continuing to messily navigate their way through adulthood.

We've circled back every Monday during Season 2, where contributing writer Alisha Acquaye has dished all the feels on each episode. Below, we share the last recap of the season.

ICYMI, here’s the recap for Episode 7.

Walk. Walk into the place you once knew. Issa walks through an Inglewood that was once so familiar, but is changing right before her eyes. “I-Wood” is what a white millennial calls it, while advertising a new coffee shop coming to town. Issa’s shirt reads “NIGGAS”, a perfect declaration against the world changing around her—fuck your gentrification, I’m still here.

Run. Run through the corridor of palm trees that surround you. Lawrence runs a marathon with Aparna, his new boo, and the amiable coworkers he’s been kicking it with lately. Lawrence also runs from his past, from the pain of Issa’s betrayal. And as he runs, rather than confronts, their demise, the side effects of Issa’s betrayal bleeds into his new relationships. He questions Aparna’s loyalty and interest in him, suspiciously questioning her about Colin, the coworker she flimsily fucked earlier this season that she still happens to be friends with.

“Ew. Just because we had sex doesn’t make us close,” she defends herself. “That's literally as close as you could get,” Lawrence says. “Not to me.” It saddens me that some men still believe that women can't separate sex and love, as if every person that enters our bed leaves a stain in our sheets.

Strut. Strut into the space where you want to be seen. Molly struts into job interviews with the confidence and regality of an intellectual empress. Her new potential employers, two black superiors and one white, recognize her dopeness off the back, while her current employers present her with a paper award and gold stamp, like a yellow star on a child’s homework assignment. No raise, no promotion—just a disrespectful pat on the back to keep her around. She doesn’t fall for it.

Like her potential new employers, Quintin, played by Lil Rel Howrey recognizes Molly’s glow. Molly tries to imagine what her life could be like, instead of how it should be—the running motif for the past two seasons, finally articulated by her therapist—and sleeps with Quintin. Whether they connect is unclear, but by the conclusion of the episode, Molly finds herself back into the arms of Dro.

I would find Dro and Molly’s sexual affair empowering if only Molly wasn’t looking for something more, but she is. She wants love, she wants commitment. The passion she feels for Dro far surpasses the comedic connection she has with Quintin, and the practicality he shows—he could give her what she wants. We struggle with desiring people that give us a rush, make us feel alive, invigorated and emotional, even if they aren’t compatible with us. And we find it challenging to connect with the practical ones who want what we do, but the initial attraction is missing. Ideally, we should have both, but we struggle to find this—intense connection and practical compatibility—in one person, at one time.

"Issa and Lawrence have grown."
Step. Step back into the dwelling you called home. First Lawrence, than Issa. As we watch them trace one another’s footsteps for the final time, we remember the gravitational pull of shared spaces, that somehow, sometimes, our feet lead us back to the place or person we are most attracted to: a silent map our bodies follow without our mind’s knowledge or navigation.

Issa opens her door to find Lawrence waiting around the corner. They finally are at a resting place of mutual ground, and are ready to calmly discuss their relationship. Their words are filled with the patience, perspective and introspection of two lovers who are finally acknowledging the ingredients they contributed to the disastrous recipe of the breakup. Lawrence admits that his perfectionism and expectations of himself, and thus, inability to live up to his and Issa’s hopes, made him shut down. Issa admits that she could’ve been more supportive, that at one point, she needed to be the best for the both of them in order to pull through his difficult time.

In relationships, we have to switch roles in certain phases: sometimes one partner needs to lead and take care while the other follows or recuperates from a difficult life blow. There should always be a circular exchange of love and compassion, but sometimes you have to be the backbone of the relationship when the other person is falling apart. However, this should be temporary (and mutual, if we find ourselves in this position): we can’t be a superhero forever. Lawrence and Issa’s relationship is a complicated one, because it seems like, at one point, she was holding him down, but this role became too overwhelming when it seemed as though there was no expiration to Lawrence’s slump.

While Issa watches Lawrence walk out her life, and their former home, she envisions all they could have been. We know this cliché all too well: that in near death experiences, some see their lives flash before their eyes—who they were and what they wish they could have done before meeting death. Issa’s daydream sequence is similar: while comprehending the death of her relationship with Lawrence, she imagines he proposes to her, they get married, make love, have a beautiful child, build a new home with one another. It is the most heartbreaking, bittersweet fantasy that we’ve witnessed, because we know that Issa and Lawrence still love each other, and that in a simpler life, this dream could be real.

I teared up during their closure conversation. It was one of the deepest, sincerest closure talks I have ever seen on television and in real life. Not everyone is granted such a productive conversation, especially so soon after breaking up. It is rare to exchange such mature words and candid tears with a person you’ve hurt and who's hurt you. Issa and Lawrence have grown.

Season 2 ended with the perfect song: Frank Ocean’s “Biking," a mellow tune with hip hop influences and a direct metaphor to navigating the twists and turns of life with the technique and liberation necessary to ride a bike. Some of us are treading water, barely staying afloat or feel like we’re drowning in life. Some of us are running from the truth, sprinting past grand opportunities or walking back into problematic situations. Or pumping pedals, steering and braking against the hilly paths and steep inclines on the road of "adulting." Our beloved characters are doing all this and more, but no matter what method they use, I am confident their destinations will be vast and picturesque, in addition to the scenic routes they take along the way.

Knock. Knock or open the door. Behind it is the person you want, the familiar, but unfortunate, spirit your bones can’t shake. For Molly it is Dro, for Issa it is the on-and-off again Daniel. Walk in. Whatever consequences you find this time is your conscious choice. And that, is empowering—even if it leads you off a beaten path.