Inside Sudan's Viral Revolution: What You Need to Know 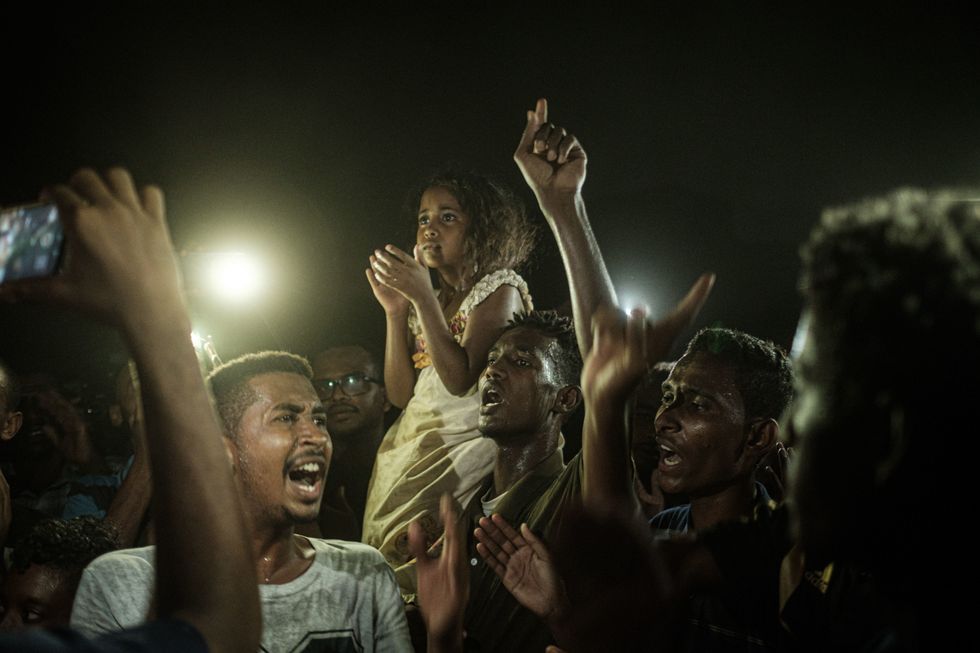 People chant slogans as a young man (not in picture) recites a poem, illuminated by mobile phones, before the opposition's direct dialog with people in Khartoum on June 19, 2019. - People chanted slogans including "revolution" and "civil" as the young man recited a poem about revolution.

After flying under the radar for months, the #sudanuprising went viral and misinformation went worldwide.

Since December 2018, Sudanese people—both in Sudan and across the world—have been tweeting, writing, drawing and demonstrating about revolution. And with each passing day and peaceful protester silenced by the Bashir regime, our cries grew louder—partly out of a need to get the world's attention, but mostly out of pain.

At some level, we knew we were screaming into the void. There are other, pressing matters for the world to tend to—the Trump news cycle, the Brexit house of cards, Notre Dame. And even if there weren't, most people in the world couldn't point to Sudan on a map. So the story of our revolution remained widely uncovered and un-televised, except by us.

For the last 6 months, almost every single day of the Sudanese uprising has been meticulously documented on social media. We made sure of it—more so than for the world, we did it for ourselves, and for the millions of Sudanese scattered across the globe thanks to this regime.

There was a moment we briefly caught the global wandering eye: on April 11, Omar Al Bashir was deposed; and the day before it, when the photo and video of a female protester shattered the world's preconceptions of Sudanese (/Muslim) women. More time was spent dissecting and iconicizing her image than on the magnitude of the Sudanese people's accomplishment of ousting a 30 year dictatorship.

It wasn't until June that the world took notice of us again, missing two months of social and political awakening, of art and growth, of the fruits of organized nonviolent resistance. It also missed the continued violence of a regime not yet ready to let go, one that was exercising its brutality in places removed from the public eye, in cities like Nyala and Zalingei in Darfur, where it has long been accustomed to inflicting pain with impunity.

But it took the heinous events of June 3rd for the world to finally sit up and take notice. In the early morning hours of that day, we watched in horror as protesters at the Khartoum sit-in were attacked by regime forces, beating, shooting, and raping peaceful protesters before they set the sit-in tents on fire with their sleeping inhabitants inside. The most harrowing moment of our revolution was broadcast live on Facebook, on Twitter and on AlJazeera. It was the last thing we saw before the internet was shut down, and Sudan went dark.

When the dust settled, we were left with the reality of over 100 dead, hundreds injured, and countless missing. I don't need to tell you the details, because you've probably seen the posts on Rihanna's instastory. Or maybe you came across Kourtney Kardashian's posts. Or Yara Shahidi's. Or Davido's. Or Didier Drogba's. Or SZA's.

In the blink of an eye, our revolution went from niche happening to viral event. The outpouring of support was overwhelming. A bright, warm light shone down on the lonely abyss in which we were plunged as Sudanese for the past six months, and driven deeper into by the events of that harrowing day.

Worldwide, celebrities, activists and people from all walks of life were raising awareness about Sudan. But without much of an understanding of Sudan, awareness turned into misinformation. For most people, the June 3rd attack was not only the focal point, it was the only point of reference. Just like a great game of telephone, the story morphed from "massacre" to "humanitarian crisis" to "feed the children of Sudan," and what started off as an opportunity for the revolution to gain global recognition and worldwide support quickly devolved into a scramble to keep the narrative of the movement from derailing completely (and keep clout chasers from hijacking the wave—@sudanmealproject is a scam).

In times like these, what was once the advantage of social media to help spread the message quickly and widely, now worked as a disadvantage when trying to rectify inaccuracies. Punchy, emotion-filled sentences are much easier to digest and share than historical context and cultural or political nuance.

How do we concisely explain why the June 3rd massacre happened (to crush the revolution), without also explaining who was behind it (the TMC)?

And how do we explain why they were behind it, without also explaining who they are in relation to the previous regime (former advisors, ministers and higher-ranking generals in a deeply politicized military institution)?

And how do we make the world understand the significance of the June 3 massacre, of the nationwide sit-ins, of all of this and why the Sudanese people are revolting in the first place, without recounting the story of the last 30 years under the Bashir regime?

Even as I write this, I am frustrated that I there is so much more I did not address—for example, that the forces that attacked the Khartoum sit-in on June 3 are the same forces that wreaked havoc on Darfur for decades, and using the same tactics. That 6 days after the Khartoum sit-in was dispersed, the town of Dileij in Central Darfur was attacked by those same forces, and burned to the ground. That in the 2 months of its existence, the Khartoum sit-in had become a symbol of freedom and triumph to which flocked Sudanese from across the country and across the world; the fruit of six months of labor, bloodshed, and ultimate sacrifice, and a testament to the Sudanese people's legacy of nonviolent resistance.

Trying to fill the gaps feels like playing whack a mole. I am frustrated that the information I have given you in this article is not nearly enough to fill all the gaps, to give you the full picture of the last six months, let alone the last 30 years. I am frustrated that my word limit will not allow me to give you the full picture; and that even if it did, that this article cannot compete with those short, punchy and diluted social media messages.

While writing this, I received a message from one of my cousins in Khartoum, who after 12 days has finally gotten access to internet in his home. After a quick celebration, I ask him, "What's one thing you'd like the world to know about our revolution?"

His answer comes back fast and confident. "That the revolution is peaceful, and one of consciousness. And that the TMC is killing people in the same manner, if not worse than Bashir."

It is the same sentiment that many of my other friends and family have expressed. That the battle we've been fighting is older than June 3, and even older than the last 6 months. And most importantly, that the Sudanese people are not done fighting.

And thus, I find the answer to my frustration: If you want to know about the Sudanese revolution, ask the Sudanese people across the world who are living it.