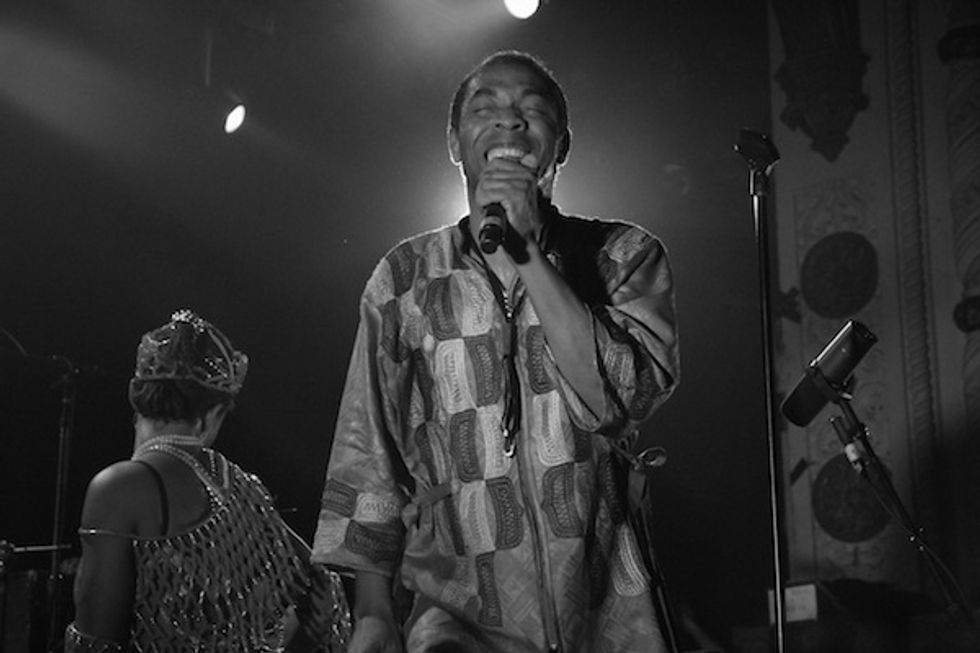 Check out this interview with the oldest son of Fela Kuti, Femi Kuti where he talks about afrobeat, his new album, and the legacy of his legendary father.

Femi Kuti and Postive Force visited Chicago's Metro nightclub on a painfully cold winter night recently. Kuti arrived on stage visibly shivering, but wasted no time heating things up. The reigning prince of afrobeat led his seven piece ensemble through a blistering set of familiar favorites and new material from his soon to be released LP No Place for My Dream. At age fifty, Fela's eldest son is still an electrifying performer. Kuti had no trouble setting the dance floor off, while working himself into a trance-like fervor, chanting and screaming his impassioned message of social justice. After the show Okayafrica's Kyle Long caught up with Femi Kuti to discuss his new project and the current state of afrobeat music.

Kyle Long for Okayafrica: What's the meaning behind the title of your new album No Place for My Dream?

Femi Kuti: It's a story about my life. I set out with all these good intentions of world peace, love and togetherness. People around me would say "there is no place for this dream. Great men have had this dream, why do you think your dream is any different? Don't waste your time." But I said "no, I'm determined to keep this dream." As much as I tried to explain my view, I was discouraged. But I want people to dream and I hope the title will make you think a lot and dream.

OKA: What are your thoughts on the current generation of Nigerian pop stars like D'banj, P-Square and WizKid?

FK: I know they're trying to sound very American, but they also draw a lot of influence from afrobeat. I think they are on the right track. I don't have anything to criticize about them. I just wish they would learn to play musical instruments. I think many young people come into music without learning an instrument. They are relying on drum beats and a catchphrase. The younger generation that will take over after them will grow up thinking that this is what music is all about. But their music creates peace, it makes people dance and it makes everybody happy.

OKA: Over the last several years there's been an explosion of interest in afrobeat music, does that surprise you?

FK: I'm not surprised. When I was a young boy we listened to everything from America and around the world. But no music really touched us like my father's music. It had something more meaningful. Other things we heard had love stories, broken hearts, blah blah blah. They all sounded the same, repeating the same lyrics. My father was always talking about the suffering of the people. His music meant something. So I'm not surprised that many young people want to identify with this kind of music, especially considering the crisis we are facing globally. Young people want to be identified with something that is meaningful. Because of this, afrobeat will always grow with each new generation.

OKA: Why is the message of social commentary such an inseparable component of afrobeat music?

FK: Because Fela, the founder of the music used that concept as the basis of his creation. He set out to use music to fight evil and corruption; to stand up for justice. He paid a very huge price for that. But he never backed down, he never compromised, he never surrendered. People feel the impact of this foundation. Every generation that hears this music becomes very strongly attached.

OKA: What's the current state of the club your father established, The Shrine?

FK: The Shrine is not just a club, it's a place where we use music to pay homage to great people. It was built to honor great people like Martin Luther King, Mandela, Lumumba, Sankara - people who have fought for freedom. That is the basis of the Shrine. It's still there and it still has a lot of support from the people. It's standing strong.

We have a free disco night which 2,000 people attend every Friday. It's free because we understand people can't afford to come every week - music is not only for the rich. I play every Thursday and Sunday. I play for free on Thursday and charge two dollars on Sunday.

The government has tried to close the Shrine several times. The last time there was a very big outcry internationally and ever since then we have had peace. The government now, especially the state government, is trying to make friends with my family. They built a museum in honor of my father. So things are looking quite bright. There's so much international press now with Fela! on Broadway, so many people are talking about afrobeat. That keeps people from persecuting the family.

OKA: You've had an amazing career; what's next for you?

FK: I would love to build a studio in Nigeria. I think if I build a studio, then I'm obliged and willing to work with as many young artists as I desire. I think that's what I want to do in the future - build my studio and help young artists with their music. This new album is very powerful. It's frightening, because I think it's my best work. I think I'm going to find it very difficult to overcome this album in the future. But I'm going to keep on practicing, working hard, touring and dreaming.