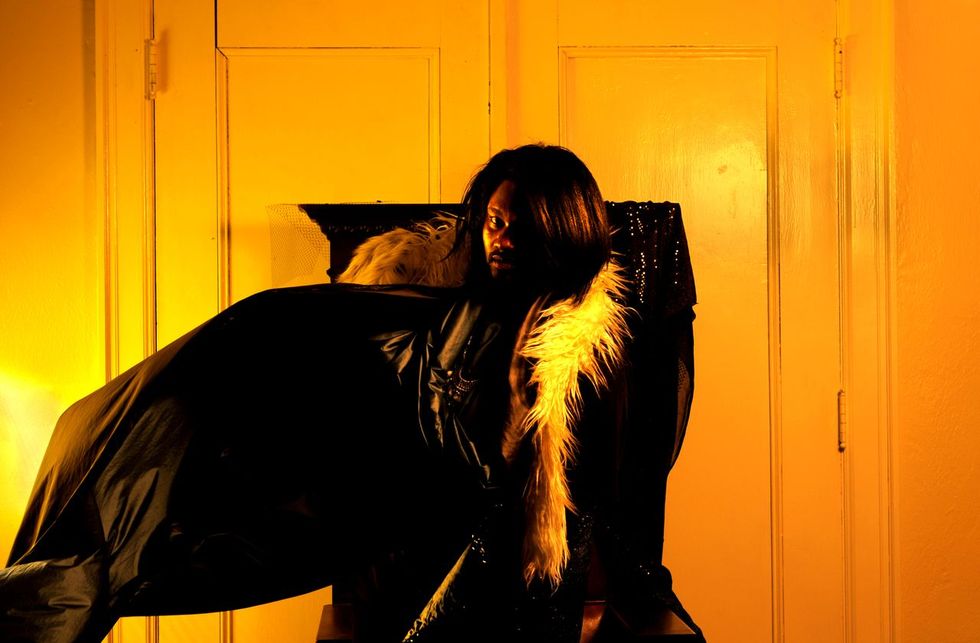 ‘Unique’ is a word that gets thrown around too often in the music industry but in the case of Tunde Olaniran it’s one of the few that comes close to describing his style. Strains of modern Motown meet Euro-electronica with a heart of Nigerian funk, pure pop melodies and fluid 4-octave range vocals delivered with a glam-rock sensibility… to describe it can become a confusion of labels when in fact it’s a seamless global sound that comes from the evolution of the artist himself.

“I was born in the United States. My dad is from Nigeria, he met my mom going to college in the United States,” Tunde explains. His father went on to join the military and so Tunde’s childhood was spent absorbing social and musical influences from a brief stay in Nigeria followed by longer stints in Germany and the U.K., where he met many relatives from his father’s side.

He was back in Flint, Michigan for middle school with a perspective that had already been shaped by the time spent abroad. Tunde notes the interesting dynamic in Michigan, where poor sharecroppers came from the old South to take part in the then booming industrial economy and a good school system that came as a product of investment in education in the mid-century.

His parents divorced and he calls his growing up there an “intense middle class” experience, conscious of the differences between African and African American, European and North American mores and styles; the subtleties of race relations – where some looked down on his mother’s mixed race family while others looked down on people like his father with his very dark African skin. Those reflections and observations on social issues and identity politics inform his lyrics and come out in songs like "Brown Boy" off his upcoming EP, The Second Transgression.

Music wasn’t in his early plans. “I didn’t really do much music outside of choir in school,” he says. “I wrote poetry.” When it came to music, his tastes were fairly conventional. “I listened to mostly pop music. I didn’t have a lot of hip hop music until I was 14. It was new to me.” He remembers being struck by Aaliyah’s "Are You That Somebody." “I love really traditional pop music.” It’s a love you can hear in the catchy melodies of even his most esoteric compositions. His early musical influences also foreshadowed his own art later on, including a fondness for M.I.A. “I realized you don’t have to be a good musician,” he laughs. “I loved that she was a ‘collage artist’ of music - the way people now engage in music online. It’s like two plus two equals five.”

He also listened to people like Lauryn Hill and Paula Cole. “I love strong female vocalists.” His own musical ambitions didn’t come to the fore until later on. “It wasn’t until I was in college,” he explains. “I was in Chicago Idol.” After sending an audition videotape to the very first annual Chicago Idol competition in 2003, he ended up in the top 15,sharing the stage with R. Kelly and performing for then little known judge Kanye West. The experience itself proved to be the kick starter for his career.

“I realized I loved performing – that was the most fun. So I came back to Flint and I joined a rock band. It gave me a chance to write.” The group, called Taste This! achieved some success locally and garnered some radio play for their inaugural release. “I learned a lot from playing in a band,” he remembers. After a solo release that also got some attention and airplay locally, he reached back to his continental past and hooked up with Berlin-based DJ duo CLP (Christ De Luca and Phon.o), contributing three tracks to their 2008 album Supercontinental.

He ended up touring Europe with them and getting international airplay for his own music in the bargain. “That’s when I finally learned this is an industry and you have to work for it,” he says. “To meet people who were career musicians – it was a real eye opener,” he says.

The experience also led to the development of another key facet of Tunde’s art – his live show. “That’s when I started thinking about the live show,” he says. His performances showcase his theatrical flair, complete with dancers, costumes and makeup, all of it under his direction.

The shows verge on performance art or installation, but for him it’s an extension and expression of the music and he pays attention to the basics, with a strong focus on both the meaningful lyrics and the eminently danceable grooves. For the upcoming release, he’s bringing his fans a somewhat heavier sound. “I was talking about production last night,” he says from an interview on the road. “For me, it’s about two elements; samples, compelling samples with strings, mandolins plus a little bit heavier now with live guitar, bass guitar. It’s heavy on memorable vocal lines without doing something people have heard before.”

He’s touring now to focus on pushing the upcoming EP. After a youth spent globetrotting, he seems firmly planted in Michigan soil these days. “Right now, I’m doing some regional tours. I really am focusing on building a profile in Detroit, Chicago, with some east coast connections in Washington and Philly.” He’s also looking to expand radio play, including the European angle where he’s already enjoyed success. He doesn’t count classic Motown among his influences but is a big fan of its contemporary artists. “I’m more influenced by current Motown artists,” he says. “I love the scene now with so many committed social activist/musicians.” Read more about Tunde at his website here, and keep an eye out for The Second Transgression.