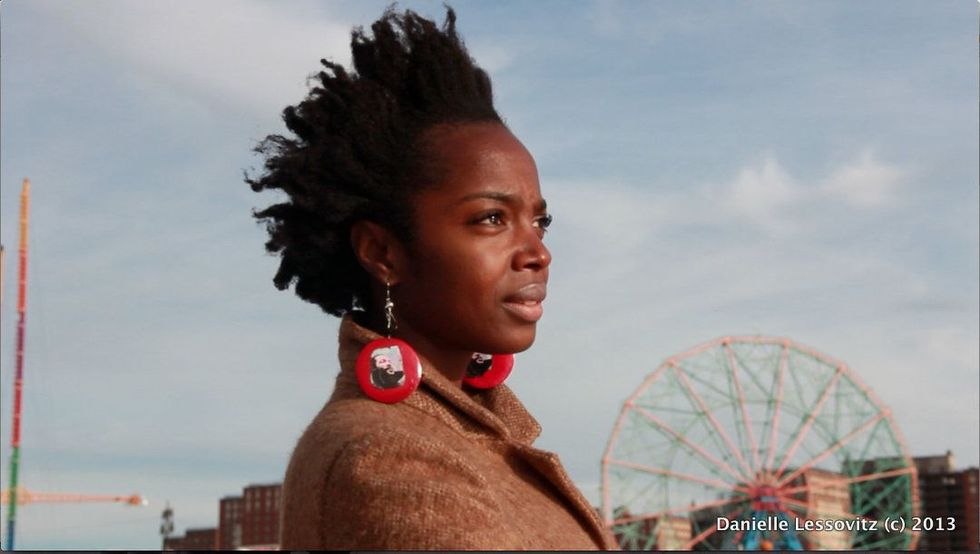 The writer and director shares a preview of her film, 'New York, I Love You.'

MaameYaa Boafo in "New York, I Love You." Photo by Danielle Lessovitz.

Last year we shared director Iquo Essien’s photos as she told her experience about her trip to FESPACO 2015 in Burkina Faso, where she screened her short film, Aissa’s Story. She’s back to preview her latest project, New York, I Love You, which will be screened today at the New Voices in Black Cinema Festival at BAMCinematek and next month at the 23rd New York African Film Festival.

“This is the first time I’m screening at BAM,” Essien says. “It’s good to show in Brooklyn because a lot of key moments in the film are in Brooklyn, so this is really a Brooklyn film.”

New York, I Love You depicts Viviane (MaameYaa Boafo from an An African City), a New York actress who plans to move to Los Angeles on a whim to start afresh with her career, leaving her boyfriend, Kazembe behind. Constantly stuck in her thoughts, the film beautifully portrays this internal struggle with the city as the backdrop.

In the conversation below, Essien talks about how New York I Love You was developed, character development and the importance of keeping a community of African creatives close as inspiration..

How did the film come about? What was your inspiration?

I had the beginnings of this short film I started writing in 2011, and I decided to modify it a bit and make it a girl who’s going to move to LA. I was thinking about what to do next, and so I wanted to do a movie that was a postcard to New York with someone who’s going to have to breakup with the city and breakup with her boyfriend.

It came out of a project I had started working on years ago that was actually supposed to be about a girl, like me, moving back to Nigeria, but then I kind of shifted around a little bit and I made it a girl moving to LA.

It was something I needed to do: give myself permission to leave. I’m still in New York now, but I needed to have a film that was letting me say my goodbyes or even just capture what it is that I love about the city.

I got to shoot in Coney Island and go to the carousel in Bryant Park—and different parts of the city like Union Square, and the Statue of Liberty. I wanted to capture the beauty that I see in the city on film. It’s less about a heavy story and more about beautiful images.

Iquo Essien behind the scenes of "New York, I Love You." Photo by Reese Nanavati.

Why does Viviane have so many quiet moments to herself in the film?

I wrote her as someone who’s in her head a lot. It’s hard for her to be present in the world. She’s living in her imagination or she’s living in her thoughts, in a way, that’s kind of how I am. I wanted to to depict that on screen.

The carousel scene is the most noticeable because it goes on fairly long. But for me in that scene, she’s making an emotional shift. She’s happy when she starts, then she’s thinking about everything she’s leaving behind and she’s sad by the end. It’s a journey she goes on as she’s on that carousel, but I think it’s also because in, Aissa’s Story, I felt I didn’t get a chance to show that character, Aissa, alone enough and just in her own headspace. I wanted to get a chance to do that in New York, I Love You because I think it allows us, as the audience, to process our own thoughts and ideas as to what this character might be going through—it gives the audience the space to experience with the character and take a pause.

With short films, it’s actually possible with the right pacing to feel like a much longer experience. That’s also why I like giving those moments of repose because it ends up making the film feel much fuller.

MaameYaa Boafo in "New York, I Love You." Photo by Reese Nanavati.

How did you connect with MaameYaa Boafo from An African City and Zainab Jah from Eclipsed?

We’re all in this group of African women creators in the city that know each other. And we either work together, have worked together, are friends, you know, sister friends exchanging ideas and working on projects for years—all of us. I mean, I think I see myself more as a connector anyway, but as I started meeting actors and other people working in film as I was coming through film school, I just hang on to them and continue the best I can to work with them.

Zainab was in a short film I made called How To Make Afang Soup in my first year of film school, which is a story about a young daughter, how she learns critical lessons about her culture passed on through cooking with her mom in the kitchen, and by the end of the film her mom actually passes away. Zainab was the mom, that’s how I first met her. She auditioned for that role I didn’t know her—she just showed up one day and auditioned, and I casted her. I got to become her friend and we’ve been friends since 2008.

MaameYaa also came to me through an audition, she actually auditioned for Aissa’s Story although I didn’t cast her. But I decided to stay in touch with her and we started workshopping New York, I Love You long before I directed her in the film. We also had a lot of friends in common.

These women are here to stay. We’re all going to continue working together as much as possible and keep supporting each other’s work, because honestly, if we didn’t make the opportunities for ourselves there wouldn’t be a lot of opportunities for most of us to work. That’s why I’m a director. I have a performing arts background. And people always ask me if I’m an actor even though I’m a director, and it would be great to act—that’s something I wanted to pursue, but as a director and a writer I get to create my own opportunities because I’ve realized that the industry isn’t really creating a lot of opportunities for those that look like me. So I want to create those opportunities for myself and also the people that I know, so I can work with them, and we can all have great platforms to take ourselves to the next level.

Zainab Jah on the set of "New York, I Love You. Photo by Reese Nanavati.

How important is it to have a community of women with similar backgrounds in your industry?

Without that kind of support system, I don’t know that I would still do it. They’re the only people that reflect back to me the reality that I actually live. If it was only up to Hollywood, or the white-centric, indie scene, I wouldn’t see myself represented.

I find the more interesting work coming out of alternative spaces. That’s the only reason why I’m still working.

You can catch New York, I Love You, today at the New Voices in Black Cinema Festival at BAMCinematek before the screening of the feature film, How To Tell You’re A Douchebag, at 7:00 p.m. Check out the preview below.