Italy Is Not Just Racist, It's Anti-Black 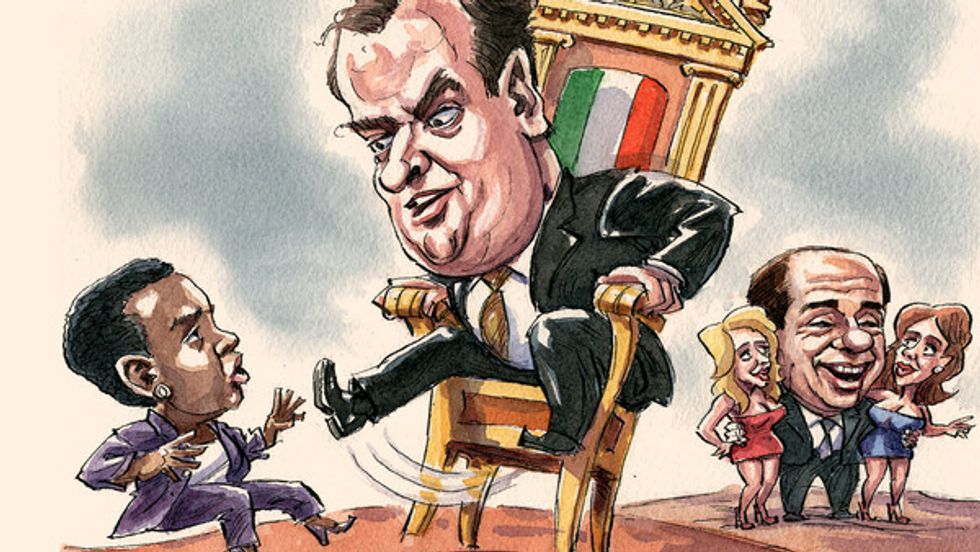 Okayafrica explores Italy's racist mindset and suggests an open public debate that does not involve calls for violence. Or fruit.

Just last week we reported on Italian politician Roberto Calderoli's racist comparison of Cécile Kyenge — the Italo-Congolese new Minister of Integration — to an orangutan. Now, less than two weeks later, it appears that average Italian citizens have been emboldened by the discourse of their political leaders, hurling insults, threats, and bananas on stage at Kyenge's rallies, most recently in Cervia, a comune of Ravenna. As Kyenge continues to push for laws that make it easier for individuals born in Italy not of Italian heritage to gain citizenship before the age of 18, conservative political factions across Italy are continuing to show their face, upping the ante with a mantra that originally featured on the Facebook page of a 19 year-old Veronese boy: "Bananas at Cervia, hand grenades at Verona."

Kyenge's responses have remained determined and on message, admonishing the banana throwers for wasting food in a time of increased global famine and poverty. In yesterday's edition of La Repubblica - a center-left newspaper that is roughly the Italian equivalent of the NYT - Kyenge gave an interview (translation mine):

"Minister Kyenge, after repeating that she has never thought of leaving her post "not even for a moment" then stated: "Italians are not racist. Italy is stifled, however, by voices that scream louder. Everyone of us - continues Kyenge - must contribute to the creation of a serene atmosphere in which it is possible for different people to recognise each other with respect. I therefore request the intervention of the leader of the largest party from which the attacks have risen against me [Roberto Maroni, President of Lombardy and leader of the Northern League]. A cultural shift is necessary - continues Kyenge - some acts of racism have increased because of the fear of diversity. This is why there is such a need for an informative campaign of the Other."

The liberal pathos espoused by the papers has been echoed all over Italy, particularly amongst Kyenge's political allies and those sympathetic to the laws she wishes to propose. Readers of this paper are presented with information about the racism in Italy in a way that spurs their righteous indignation while quelling the average reader's self-loathing and fear. However, this will never spark the conversation that Kyenge demands. Instead the response remains along the lines of "Reading this I'm enraged by the current sociopolitical climate in Italy. I'm not like the people in this article, nor the Lega Nord (the Northern League). Italy is a provincial country, rife with brutes (scemi), and we should be ashamed of them"

This holier-than-thou cycle of distancing, disidentifying and shaming, is far more sinister than the hurling of fruit during political events. It speaks to Italy's inability to come to terms with the systemic cultural, political, social disintegration at the heart of its institutions. Additionally, the fact that those coming to Kyenge's defense are mainly members of her own political party is telling. Her race and gender are tied to her politics in a way that makes insulting her race and insulting her policies equally fair game for her opponents. And because in Italy those who are outraged have yet to hear of intersectionality, Kyenge's race, skin colour, and otherwise "foreign" origins are the only things discussed in the media.

Thing is, there is another naturalised Italian citizen from Africa working in Prime Minister Enrico Letta's coalition government: Khalid Chaouki. He was born in Morocco and raised in Campania (southern Italy). Chaouki is currently using his position in government to push for laws punishing homophobic rhetoric and violence, to support global human rights issues of integration and immigration, and to advocate for multiculturalism in Italy, just as Kyenge has been tasked with doing. There is little to no backlash against Chaouki, save for the mandatory trolling of online articles where he is mentioned. His religion is not an issue. Indeed, Italy has had history of commingling with Northern Africa and Islam; the Kingdoms of Sicily and Naples were partially or completely Muslim for decades, if not centuries. The fact is that Italy is not a racist nation, although this is putting it too simply. Italy is anti-black and misogynist. How else would the country produce an elected government official, a woman, who suggests in a public forum that another woman ought to be raped?

As a point of reference take Silvio Berlusconi, the man who served three times as Italy's Prime Minister, who committed wide-ranging fraud and other crimes against the Italian people, and was convicted of these crimes (but will never go to jail). The man who had sex with underage sex workers in brothels and had sex parties called "bunga bunga" (how the play on words about a "bongo bongo" government came to be lobbied at the new PM). Put simply, Kyenge's Congolese origins are more embarrassing to Italy than a man who stole, changed laws to prevent his conviction, made overt pacts with the Mafia, and had sex with underage women. Being black is worse, though, according to the conservatives of the Lega Nord.

Italy's problem is not immigration, illegal or otherwise. If anything, Italians are as big a drain on Italy as ever, with a risible percentage of the middle-class population deeming it necessary to pay taxes. Here is where I disagree with Kyenge's suggestion that Italy needs a campaign to raise awareness about "the Other". When you have intellectuals and moderates fleeing to other countries because they cannot find work or effect change, and when they attempt to stay are accused of communism or homosexuality; when just about every day you read in the Repubblica or Corriere della sera about a woman murdered by a lover, ex-lover or husband but there is never an article linking these things to the overarching theme of systemic violence and corruption coming from the heart of Italy's government; when you have Italians in the South not considered Italians because of their skin colour or the lack of industry, oblivious to the fact that Italians worldwide have been considered people of colour until only recently. Italy does not need an awareness campaign of the Other. Italy needs first to recognise who the Other is, and it should start with a mirror.