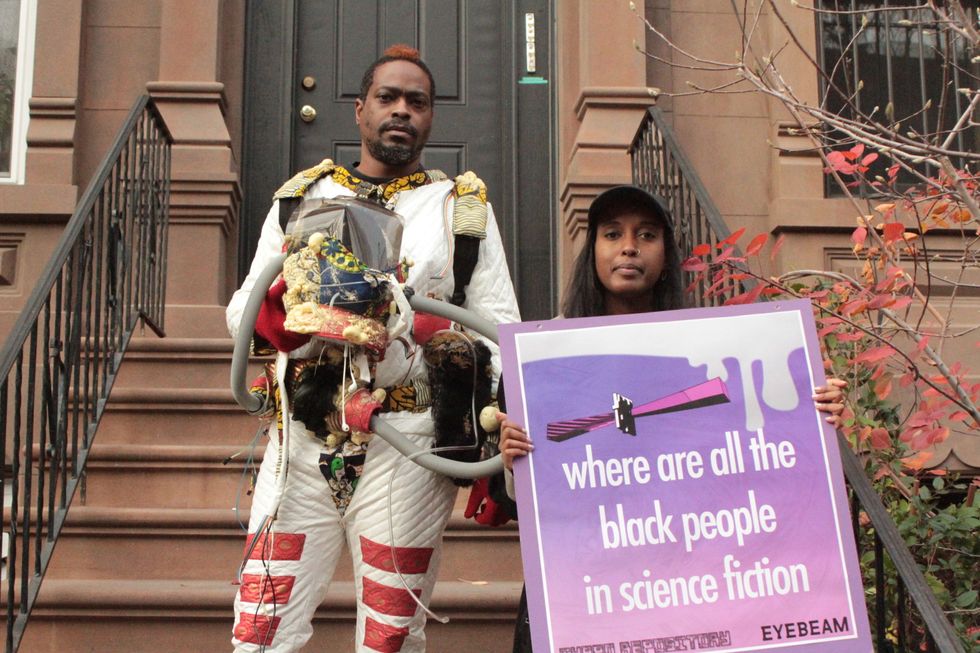 Spandex, tubing and motors come together to resemble an earthbound spacesuit. For Brooklyn-based new media artists Salome Asega and Ayodamola Okunseinde, creating the opportunity to invent a vision of the future that includes people of African descent is an urgent project. What looks like an Afro-centric astronaut is actually an artifact of much deeper spiritual and cultural meaning.

“We have [participants] play a card game where they choose a narrative, object and purpose of the invention,” Asega tells Okayafrica in a phone interview. “We had a woman, for example, who had to invent an object for a revolutionary that included a motor with a medicinal function. She drew a bodysuit made of spandex, tubing and motors on the arms and legs. She thought this object could be used for therapeutic purposes to help people who’ve experienced water trauma.”

According to Okunseinde, interpreting the purpose of the inventions helps the process to be reflective as much as it is technological.

In conjunction with their Eyebeam residencies in Brooklyn, Asega and Okunseinde developed the Iyapo Repository as a way for the community to begin thinking about futuristic artifacts. They consider the participants to be “archivists of a futuristic museum.” They’ve facilitated workshops and set up “research centers” for the public on the streets of Brooklyn for participants to interpret each object’s function as well as their role in a futuristic society. Asega and Okunseinde will then take the drawn or constructed prototypes and construct them into functional inventions.

The artists recently brought the design thinking workshop to Brooklyn's Museum of Contemporary African Diasporan Arts (MoCADA) in conjunction with February's Black Future month. Named after the character Lilith Iyapo, as an ode to African-American sci-fi author Octavia Butler, the project emphasizes the devices that add to the capability of having one see themselves in the future through technology.

“The future is given to us in in a top-down way,” Asega says. “We want our participants to feel a sense of ownership — that one can actually create one’s own future. When one starts thinking in that space, the future becomes even more possible.”

For Okunseinde and Asega, this project is about the plurality of futurism and for one to negotiate what hasn’t worked in the present.

“Ultimately we’d love to do this internationally — like in Brazil, Nigeria or a country in East Africa — to see if there’s a difference between locations,” Okunseinde says. “Their perception of the future may be different than ours when considering their language, experiences and environment.”

The artists hope to showcase the objects they are building from the Iyapo Repository at a show with Eyebeam in May. They are also in the process of looking at other residency programs and galleries to continue the project. Visit Iyapo Repository’s website for more information.