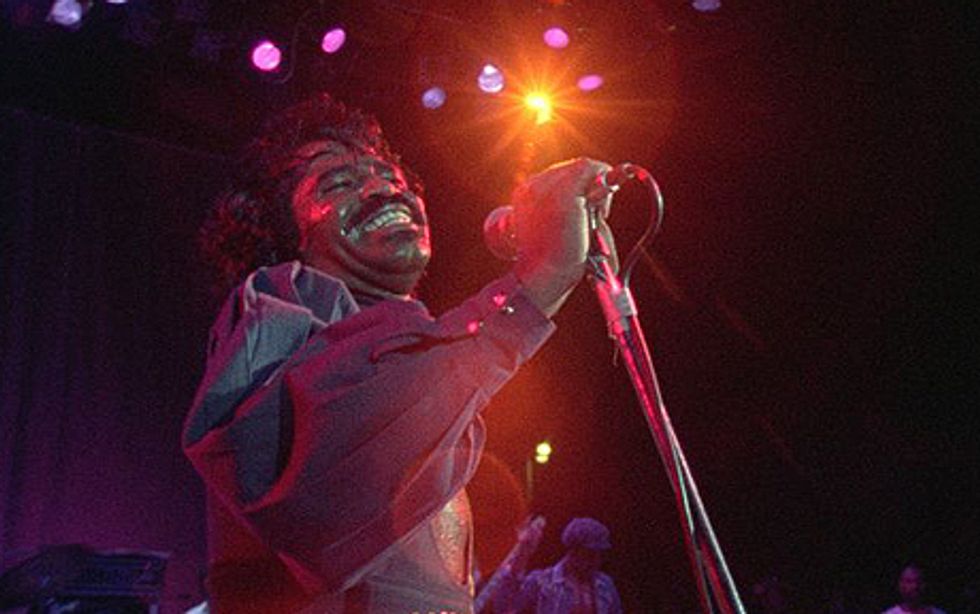 Footage from James Brown's concert in Kinshasa for Zaire 74, a three-day festival organized by Hugh Masekela and Stewart Levine.

In honor of James Brown’s birthday, we’re revisiting this powerful live video from his 1974 concert in Kinshasa. The Godfather of Soul landed in Kinshasa to play Zaire 74, a three-day festival organized by Hugh Masekela and producer Stewart Levine.

Zaire 74 was originally put together to promote Muhammad Ali and George Foreman’s Rumble in the Jungle. However, after an injury forced Foreman to postpone the fight, it became the main attraction, drawing in a crowd of around 80,000 people. The Guardian writes of the show:

It's two o'clock in the morning in Kinshasa, Zaire in 1974. The temperature is 100 degrees but James Brown and the JBs - the most tightly drilled band in showbusiness - are blasting out hits such as Cold Sweat and Black and Proud with even more than their usual intensity. Brown himself, wearing an outrageously cut jumpsuit with GFOS (Godfather of Soul) picked out in sequins, is a larger than life figure, aggressive, sweating yet supremely controlled as he produces his trademark live show for an enraptured African audience.

It’s not all positive though as the concert, of course, took place during Mobutu’s reign of power. The dictator reportedly agreed to host the festival and helped cover its costs.

The story of the festival is featured in Jeffrey Levy-Hinte’s 2009 documentary Soul Power.