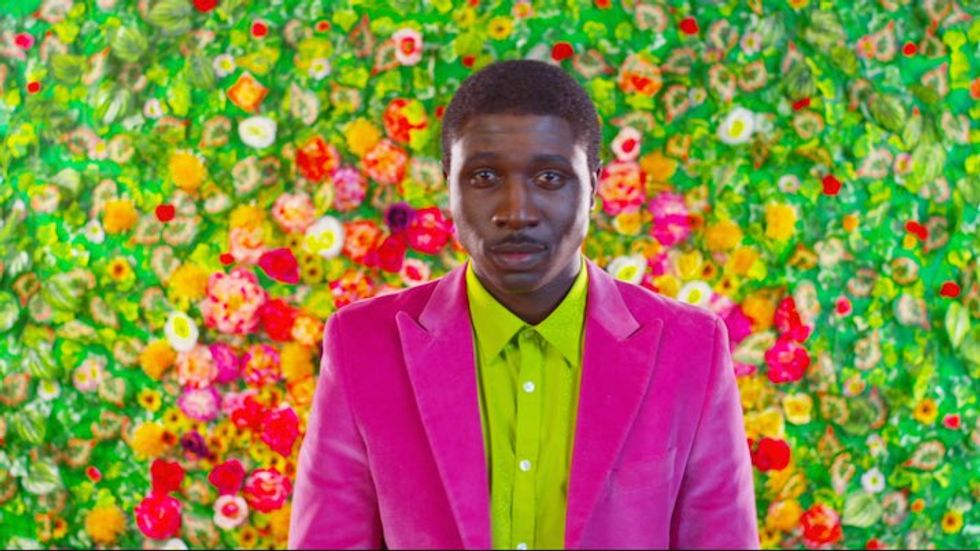 Ghanaian soul singer Jeff Darko speaks to us about the fluorescent visuals for his new single "Bystander".

We first got hooked to the sounds of Ghanaian crooner Jeff Darko last summer after the release of his debut EP, Epic Dreams Of A Pedestrian. Since then we've kept up with the trendy singer and style maven via his eclectic Instagram account hoping for some new tunes. This week, Darko brings back his hypnotic blend of soul, electro-funk and R&B on "Bystander," a mesmerizing dance track that calls for self-acceptance and individuality in a society that often condemns deviations from the status quo.

Darko, who emigrated from Ghana to France at a young age, often explores the tensions of being a foreigner in a strange land in his music. The slinky single, which premiered yesterday via The Wild, boasts a rich infusion of bongos, horns, funky guitars and choral vocals that back Darko's message of finding one's inner light and letting it shine. We caught up with the rising Barcelona-based singer over e-mail to find out the story behind his latest video and how he hopes to channel positivity to all through his music.

Jen for Okayafrica: What inspired your new track "Bystander"?

Jeff Darko: "Bystander" is a message to myself and equally to others. The inspiration comes from my own personal experiences, where I had to overcome a lot of hurdles. The lyrics introduce a new playful way of writing and the sound was inspired by Marvin Gaye, Fela Kuti and Miles Davis. It’s a taste of electro-funk music.

OKA: Could you walk us through your creative process as you put the track together?

JD: The process originally started in London with collaboration with producer O.M.B, who produced "Don’t Worry Me Now" off my debut EP. We started the building process of this song in 2013 straight after we completed "Don’t Worry Me Now." It always starts with me hearing a beat then building around it with the right melodies, lyrics and later modifying the beat to the new found direction. In this case the original beat was sculpted by O.M.B and the lyrics were written in company of Jonathan Holder and the new direction was assisted by producers at La Atlantida Estudio in Barcelona. The beat was originally quite dark and produced digitally and we felt that the lyrics will be giving new life in compliment of the electronic sounds, funk blended in with African and Brazilian influences accompanied by live instruments.

OKA: How did you and director Monica Heredero come up with the track's vibrant visuals?

JD: With the video, I simply described the message I wanted to deliver and Monica  put together an incredible mood board that caught my attention. Her early idea was to have a fluorescent theme because we were looking for something colorful but quite dark at the same time. Things in fluorescent hold their own light, so in effect our intention was to showcase the idea of giving light and life. We wanted to express that during dark times you could depend on the light inside you to shine.