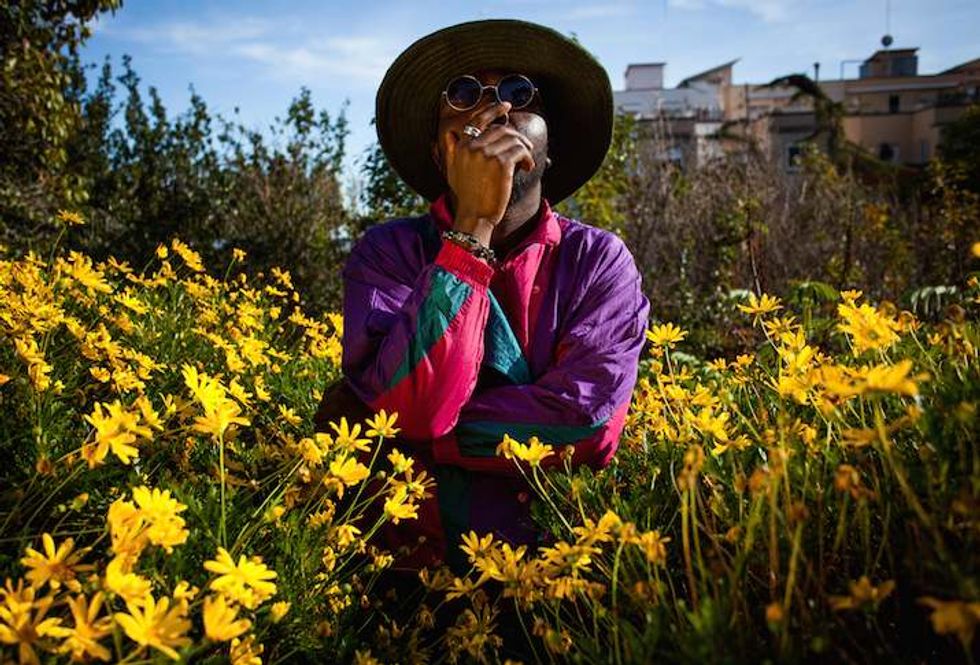 Born in Ghana and raised there for a few years before emigrating to Paris, singer/songwriter Jeff Darko nowadays calls the UK home and describes his music as an experimental melding of soul, R&B and calypso. From the moment his 'Epic Dreams of A Pedestrian' EP crashed on our radar, we've been trying to pinpoint the exact strains of influence that filter through his 6-track debut. Darko's tender falsetto paired with danceable melodies and funkified arrangements turns each song on the EP into a slow-crawling earworm that places him in a genre-bending lane of his own. Add an impeccable sense of style to this musical ambiguity and we just had to find out what makes him tick. With that said, below we present our Q&A with enigmatic crooner Jeff Darko for the third installment of First Look Friday on Okayafrica.

OKA: How long have you been making music?

Jeff Darko: I have been making music since my high school days. I can remember it like it was yesterday. I would sit inattentively in math class scribbling metaphors and compositions to take to the studio after school. It was always obvious where my passions lay.

OKA: Which artists would you say are your biggest musical influences?

JD: I listened to a lot of artists growing up to, but just to name a few: Sébastian Tellier, Nat King Cole, Angélique Kidjo, James Brown, Phil Collins, Brandy and Fred Hammond because of their time-lapsing sound.

OKA: What role, if any, does your Ghanaian heritage play in your music?

JD: My African heritage strongly influences my music. The traditional sounds we use, the bongos, the shakers and the overall ambiance. I am forever exploring new ways to introduce my tradition and culture into new and refreshing music.

OKA: Are there any Ghanaian artists you listen to on a regular basis?

JD: Well I would say my two favorite Ghanaian artists at the moment are Castro and Kontihene, whose song “Aketesia” I have on repeat a lot!

OKA: How long did it take you to conceive and develop Epic Dreams Of A Pedestrian?

JD: The process took half a year. We originally had fifteen tracks but chose the five best suited to the vision.

OKA: Can you give us the back story on the title of your record?

JD: Epic Dreams Of A Pedestrian tells my life's journey to where I am so far.  As a pedestrian in this journey I showcase each important chapter in my life with each song. The first track "Don’t Worry Me Now" is an afrocentric track deriving from my roots and the sounds and styles of my birthplace. The second track “I Am” is about when I moved to France, which is why the track is partly in French. "Weekend" is about the way I got to Europe and my realization of how much people live to look forward to [the weekend]. “Right To Your Heart” and “Can't Erase You” reflect the experiences of people that have come and gone [from my life] or rather, the people that I as a pedestrian have came across.

OKA: The three month anniversary of EDOAP is coming up soon. Are you still basking in the afterglow of the release or are you already back in the studio working?

JD: Indeed it is still relevant and with “Don't Worry Me Now” picking up momentum, we have seen a great response. We are thankful that the music has managed to reach places that we didn’t envision! Brazil and Mexico seem to really enjoy the vibes, so I can only hope that the music continues to travel and be introduced into new global markets. I love writing music, and the feedback I am getting from fans has inspired me to keep creating! Hopefully, the stuff I am writing now will be gracing people's playlists fairly soon.

OKA: Which contemporary artists would you most like to collaborate with?

JD: I love artists who break boundaries with their music so I would most like to collaborate with Prince and Kanye West.

OKA: How would you describe your personal style?

OKA: You're stranded alone on a desert island. Name three items you couldn't survive without.

JD: My Hat, my headphones and my cereal (Kellogg’s Crunchy Nut)!!