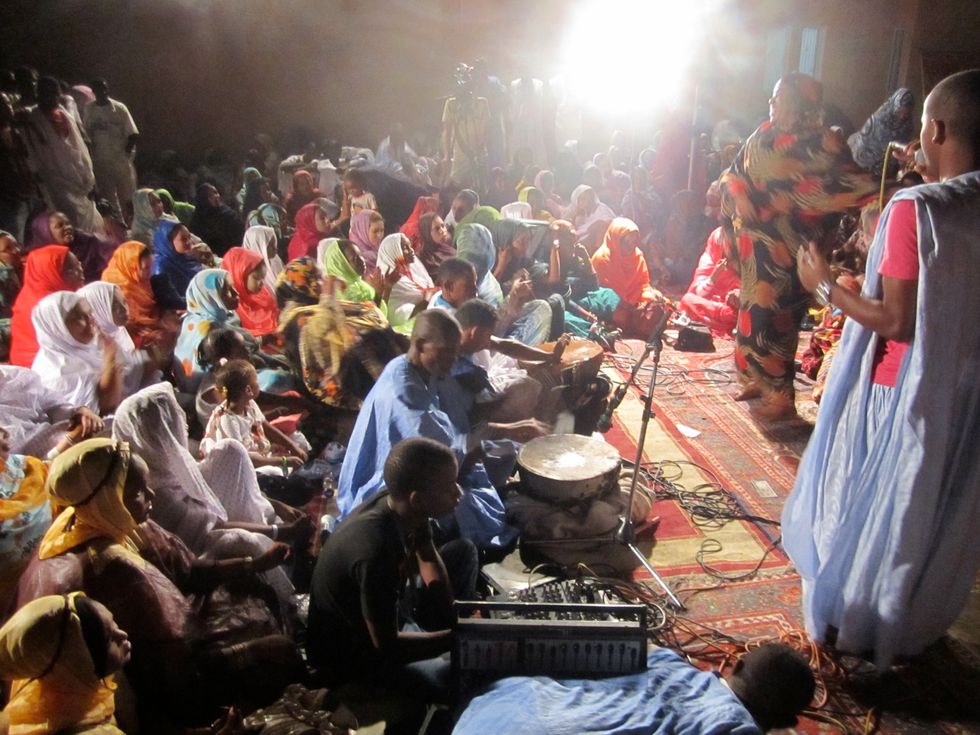 Jeiche Chighaly shares the hectic life of a griot, storyteller, in Mauritania.

Okayafrica contributor M. Tinari works in Mauritania, producing local band Noura Mint Seymali and teaching at a recently opened conservatory in Nouakchott. Below, he writes about his travels with praise singer and wandering musician Jeiche Chighaly.

If you're a griot in Nouakchott, Mauritania, this September was a really busy month. The time after Ramadan is prime marriage season, meaning gigs every night. It's probably easier just to keep the tidinitt (lute) in the back of the miraculously maintained Mercedes you and everyone else drive so that when the calls come in you can high tail it over to the hyma (Moorish tent) where you're being beckoned and start crowd-pleasing.

Unfortunately, your teubeul (bowl drum) has a broken skin that takes a few days to fix so you'll have to track down the only teubeul rental lady's place. She's elderly and drives a hard bargain, so you'll be returning the drum at the end of the night (6-7am) or be docked for another day's charge. The guy throwing the wedding has asked you to hook up the PA system, so add that to your rounds and hope for a sound guy who going to be vigilant with crowd control, someone who’s not afraid to beat back frenzied dancers who threaten to kick out the cords running from the instruments out to an electric generator in the sand somewhere outside the tent.

You’re driving pretty damn fast now. The white boubous of you and your whole crew are flapping out the window like rooftop laundry. But you speed up because you're an old pro at navigating the sandy alleyways of Nouakchott's endless, urban desert sprawl. You know how to dodge children, sewage puddles, haphazardly parked vehicles, goats, and the occasional camel without even slowing down. The recent proliferation of police checkpoints shouldn't slow you down too much either, since after all you're carrying musical instruments in the car and have the right griot's last name. Many of them have heard of you and this guy who's pulling you over now, while his buddies stand around fingering their rifles, just realized you played his sister's wedding last week. You flash a killer smile.

This was how Jeiche Ould Chighaly rolled in my recent trip to Mauritania. Having worked with Jeiche in another band for the past year and a half, I joined the wedding entourage as conspicuous foreign apprenti — carrying instruments, lighting cigarettes for performing musicians, making change so party goers could make it rain in smaller ougiya amounts, and soaking in the music in its traditional frenzy. This was not the first time I’d gotten to hear Jeiche’s guitar stretch out under the wedding hyma, but he was clearly on his griot-hustle like never before, sounding better than ever efficiently firing up the dancers until the sandals and money started flying.

The musical structure of a Moorish or Beydane wedding is codified; there is a progression of 5 modes or bhor, each of which corresponds to the emotional weight of a life stage —childhood (innocence), young adulthood (virility), middle age (maturity), old age (wisdom), and elderliness (serenity). Each mode is further divided into black (legato) and white (staccato) denominations.  Once the music leaves a mode, it may not return back to it for the rest of the performance. The bride and groom make their entrance to the 3rd mode – lekhal, which corresponds to the life stage they are entering.  This September Jeiche ran through the modal life cycle every night with an ecstatic agility, he might've gotten the extra work-strength thinking about the baby that would be born to him and his wife in a few days.

The music of Jeiche Ould Chighaly is featured alongside various other all-stars of Beydane guitar on a rigorously curated compilation- Wallahi Le Zein!! - Wezin, Jakwar and Guitar Boogie from the Islamic Republic of Mauritania - recently put out on Latitude. Weighing in at 28 tracks, Wallahi Le Zein!! is absolutely required listening for anyone drawn to so-called “desert blues” artists from the Sahel like Tinariwen or Ali Farka Touré. Culled entirely from live performances, the release is one of the most raw documents of a famously overlooked music culture in Mauritania.

Matthew LaVoie, who assembled the compilation from his own field recordings, provides an equally engaging companion text that goes a long-way to orient the listener to what may otherwise sound like mayhem. Compilations of this sort are often filled with mysterious characters whose only lasting remnants are the unrecognizable names cluttering artists menus on iTunes. But LaVoie, who spent years living and studying music in Mauritania (with Jeiche among his teachers), carefully fits each character into the evolution of Beydane music through a colorful and personal narrative.