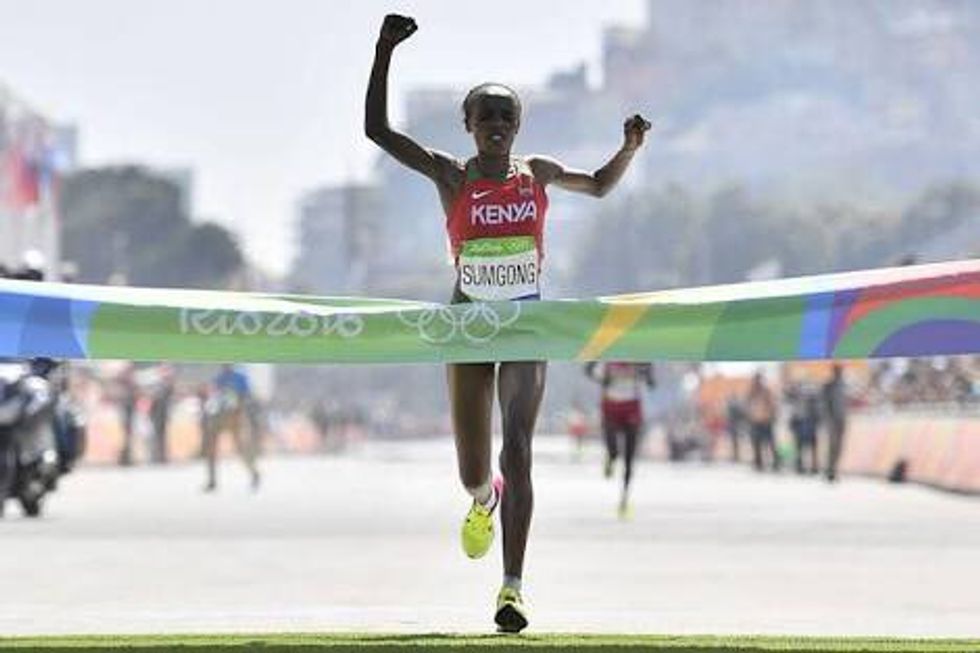 Kenya’s Jemima Sumgong made history for her country, becoming the first woman to capture a gold medal in a marathon.

The runner's confidence showed as she was seen chatting at some points with her Bahraini rival Eunice Kirwa who outpaced the pack most of the way, but fell behind in the final stretch, finishing in 2 hours, 24 minutes and 13 seconds, clinching the silver medal for Bahrain. Kenyan-born Kirwa switched allegiances from her home country to Bahrain in 2013—a common practice in international sports.

"When the other Kenyans were left behind, I did see [Kirwa] close to me," Sumgong says. "In fact we talked so much on the way, but I couldn’t help her since she was running for another country, and I was running for Kenya."

"I was never worried that I'd lose this," an ecstatic Sumgong tells the Associated Press. "At 40 kilometers, I knew the gold was mine."

Sumgong’s historic victory was extra sweet considering fellow nationals had voiced criticism of Kenyan authorities on social media for 20 athletes repping adopted countries, including at least three athletes who ran in the marathon for Bahrain and Canada. Add to this Sumgong nearly tripped before winning the London marathon in April. But the Kenyan miracle was steady on her feet for Rio.

The Kenyan runner tweeted that bringing home the gold was the best day of her life.

Best day of my life @TwitterKenya#kenpic.twitter.com/uppnkG1k4x