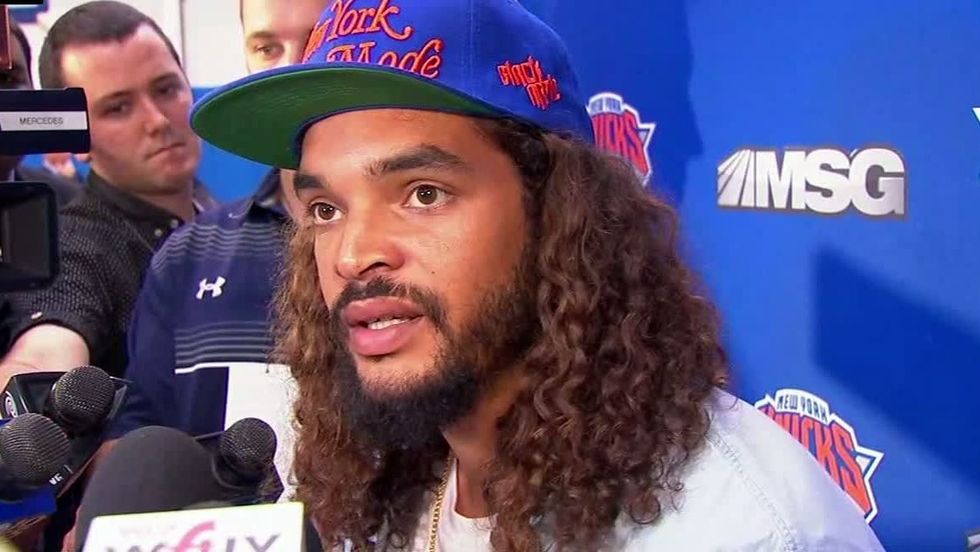 On Thursday, NBA star Joakim Noah skipped his team’s annual dinner at the West Point Military Academy and purposefully missed a speech from a retired Army Colonel. Although he assures reporters it wasn’t about taking a stand or launching a protest, he did so because he’s against war.

“I have a lot of respect for the kids who are out here fighting. But it’s hard for me to understand why we have to go to war, why kids have to kill kids around the world,” Noah is reported to have said. “So I have mixed feelings about being here. I’m very proud of this country. I love America but I just don’t understand kids killing kids around the world.”

The 31-year-old star center and lifelong Fela Kuti fan is the son of Cameroonian−French singer and tennis great Yannick Noah and the grandson of Cameroonian football star Zacharie Noah, who still lives in Cameroon. Noah has referred to himself as an “African player.”

Speaking with reporters about missing the West Point dinner, Noah maintained that he’s not anti-troops. “It's just not comfortable for me to see kids going out to war and coming back having seen what they've seen, having done what they've done,” he added, according to ESPN. “It's sad for me because they're just sent out for things that I don't really want to get into it to be honest with you. It's hard for me."

Noah also mentioned that he's put off by nationalistic pride as a whole. "I'm not a very patriotic person, to be honest. I don't understand the whole flags, supporting flags. I'm more into supporting people," he told reporters.

"I think it's a very important time right now,” added Noah. “I think it's great athletes are taking a stand. But it has to be about more than that. This country's out of control. Kids killing kids. And it has nothing to do with, people are talking about the anthem but that's not the point. There are things that need to be fixed."

Knicks coach Jeff Hornacek said he supports Noah’s decision. "That's his right. He wants to be a part of the team group and do everything the team is doing. He just didn't feel comfortable (attending the dinner)," Hornacek is also reported to have said. "We're not going to pressure him into doing that. We had the speaker who I thought was fantastic. I told him, maybe we can get a little copy, if there's a copy of the speech, just so he can hear some of it. That's his right."

For more on Noah, watch the former Chicago Bull discuss Fela and knowing his own roots in the Okayafrica TV video below.