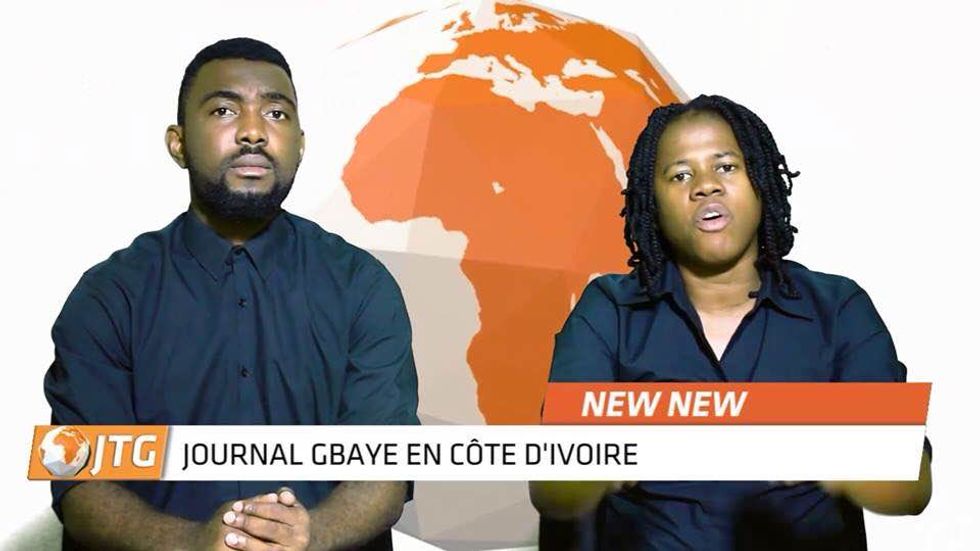 “In Abidjan, when you want to import your car, the bribes you pay to the custom officer are so high you could buy a new one instead!"

The Ivorian rapper, Nash, is decrying the daily corruption that's part of life in Abidjan on her YouTube series. Unlike other shows, this newscast is presented entirely in rap verses. Welcome to the first episode of Journal Gbayé, a news show proving popular among Ivorian youth. With only 25 episodes, it has more than 3,000 subscribers on YouTube, who come for its mix of comedy and daily news delivered as an extended hip-hop track.

Nash delivers the news in Nouchi, a slangy Ivorian street dialect that has exploded in popularity in recent years and is finding converts from across the French-speaking world.

Its method of delivery is a lively creole of indigenous and European dialect that, while popular with young Ivorians, hasn't entered mainstream broadcasting yet. Despite its lack of official recognition, Nouchi has long been a way for working class Ivorians to express themselves. Lately, it's spread across Ivorian pop culture, helping to bridge the gap between classes.

In 2013, Xuman, a Senegalese artist and social activist created a rapped TV segment on 2STV, a Senegalese TV channel, using both of Senegal's official languages, Wolof and French.

By delivering the news as an extended rap-song in two languages, Xuman brought a unique point of view and humor to news broadcasting that helped young people relate more to the issues around them. Following its success, Xuman decided to export it to Ivory Coast and contacted Nash, one of the most popular Ivorian rappers known for her deft use of Nouchi in her rhymes.

“Xuman, wanted to bring a specific Ivorian touch to the news segment by using Nouchi," Nash explains. “He thought about me, since I'm putting Nouchi on the forefront with my music.

Nash then brought rapper Smile on board as a co-host to rap in French so that people who don't understand Nouchi would still get the gist of the stories. “We want everyone to understand the news segment," Nash says.

Nouchi appeared in Abidjan, Ivory Coast at the end of the 70s. The word Nouchi comes from the Manding word nou (nostrils) and chi (hairs) or “nose hairs," a nickname for street kids in Ivory Coast. It is a mix of French and other languages spoken in Ivory Coast such as Dioula, Baoulé and Guéré.

Nouchi is a melting pot of sayings and accents, borrowing words from foreign languages like Spanish or English. For example, the word s'enjailler or "having fun," comes from the "enjoy" in English. The language is constantly changing, with new words appearing every day. The Nouchi spoken by Magic System, a popular Ivorian hip-hop group, in 2000 is completely different from the Nouchi spoken today.

“Speaking it is part of my daily life," Nash says. “I'm an Ivorian girl from the ghetto in Yopougon, a neighborhood in Abidjan where most people speak Nouchi. I had it rough growing up. My family had barely any money."

Initially, Priss'K, one of the first female Ivorian rappers, inspired Nash to rap in French.

“When I started rapping I would send my mixtapes to producers," she says. "I was rapping in French at first and it became obvious that I wasn't a French rapper and I wouldn't pretend to rap like one, so why use the language?"

For Nash, Nouchi is much closer to her as a language than French.

“Many young people are not educated and don't understand French that well," she says. "But Nouchi is the language of people from the ghetto. They speak it, understand it, and I can convey my message directly to them."

“In Ivory Coast people tend to see female rappers as an anomaly," Nash says. “I had to fight to get my music heard and reach an audience."

“In my songs, I tackle subjects that kids, young girls from disadvantaged areas can relate to. I sing about our daily lives, politics, but also about love, hope and peace. It's important that they hear that they can get out of there, fight to improve their lives."

Over the last decade, Nouchi went from being the language of the misfits and rascals to gaining mainstream appeal. The success of Ivorian music in Europe, like Coupé-Décalé and Zouglou, and artists like Alpha Blondy or Tiken Jah Fakoly, put Nouchi in the spotlight.

The way Nouchi is used in Francophone countries has many parallels with Sheng, the ever evolving Swahili street dialect of Nairobi, Kenya. Nouchi has become trendy through popular culture, music and newspapers like Gbich,a satirical Ivorian newspaper. People from western Francophone countries, use it as well, sometimes without knowing the specific codes. It's not rare nowadays to see young people especially in France, using Nouchi words they heard through Ivorian music, like toi meme tu sais for “you know it" and la go for "the girl."

While charges of cultural appropriation come easy, Nash is optimistic. “It's a good thing to see non-Ivorians in Western countries use it, as long as they know the history of the language and use it correctly," Nash says.

Will it overtake French in Ivory Coast? Some politicians have used it to try and boost their street cred. Academics, like Rémi Yao, have started researching the language. If anything, Nouchi is a way to reclaim the many languages spoken in Ivory Coast other than French, the official language, imposed by French colonizers centuries ago. Nouchi is popular among the youth not because it's new, but because it is a way of reclaiming original cultures.

“Nouchi is a great example of how rich and diverse the Ivorian culture is," Nash explains, who regularly travels to Switzerland to promote the language. "But it is important," she adds, "that Nouchi remains the language of the youth from the ghetto."

The future of Journal Gbayé is bright. The second season is on its way and they are going to add more comedians and rappers to the show, as well as a few guests. They've picked up some funding from Open Society or OSIWA, an international organization helping young Africans to fund their projects.

“We've also planned to shoot in front of a live audience on the streets," Nash says.

The RTI,Ivory Coast's main TV channel, showed some interest in broadcasting the show, “but we haven't heard from them," Nash says. “Ideally, we want Journal Gbayé to be available online and on TV to reach people who don't have access to the internet."

Through rapped news segment, Francophone African countries have found a way to bring the news to people who may not have easy access. By using French and Nouchi, Journal Gbayé and its imitators, are celebrating cultures that have long been marginalized.

Will this phenomenon expand to more countries? “I hope so," Nash says.

Check out this recent episode of Journal Gbayé with bars for days: