Journalists In Africa's Newest Country Fear For Their Lives 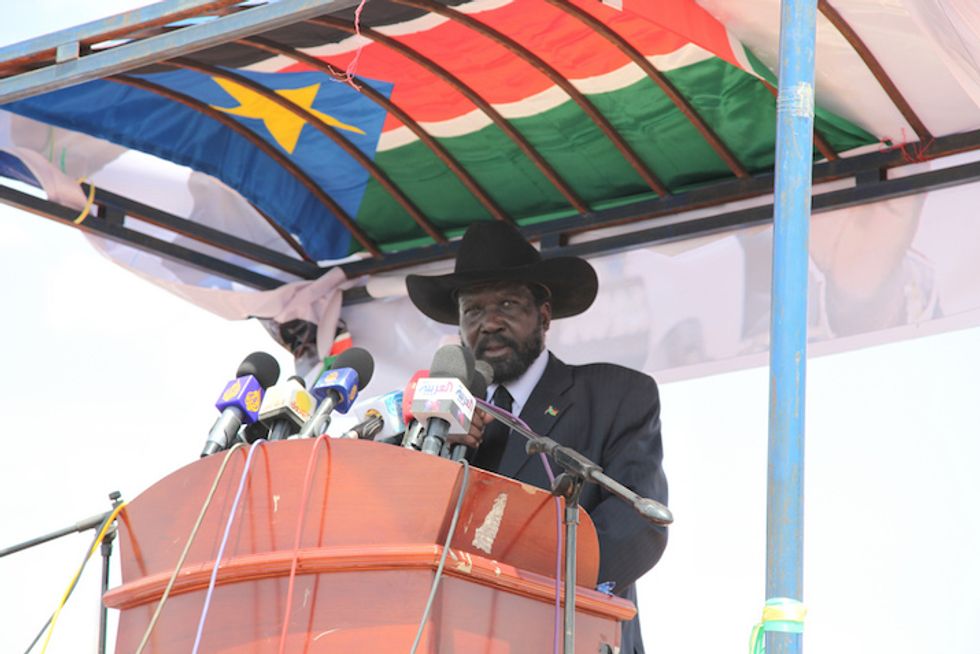 South Sudan's journalists are still reeling from a deadly crackdown.

The last time R saw his friend Peter Moi alive, they talked about how he could no longer cover politics as a journalist. It was too risky. I’m only reporting on business from now on, Moi told him.

Three days before, the President of South Sudan Salva Kiir had uttered his now infamous statement on his way to peace talks in Addis Ababa: "If anybody among [journalists] does not know that this country has killed people, we will demonstrate it one day, one time. ... Freedom of the press does not mean you work against the country."

For five years, R and Moi worked beside each other covering the birth of their country, South Sudan. Moi had agreed to stop by R’s work that night to pick up audio recorded at that evening’s meeting of South Sudan’s parliament. But Moi told R he wouldn’t be using the recording. Too political.

Moi would be killed soon after exiting the radio station’s guarded compound.

Between 2009-2011, South Sudan experienced a press freedom renaissance. The breakaway region was transitioning to full nationhood, and according to journalists practicing at the time, it was easy to talk to the powerful and regular people alike. None of the South Sudanese journalists contacted for this story would allow their names to be printed for fear of reprisals.

“Now if you want to get the views of citizens,” says W*, a veteran South Sudanese journalist reached in Juba, “they fear the media.” And for good reason. For regular people, speaking to the press now means risking one’s life. This has made it all but impossible, says W, to interview communities impacted by the current civil conflict.

The powerful in South Sudan, adds W, have become more adept at bullying reporters into getting their faces on the front page when announcing new policies, and restricting information when it serves their purpose. The recent threats by Kiir come at a tense times as the government attempts to craft a peace deal to stop the violence that has consumed the country for the last 20 months.

R believes that Moi was followed after leaving the radio station that night. It was little more than a mile down the road, in an open field on the outskirts of town that Moi was shot twice in the back. His body was found the next morning. His wallet still on him.

That morning, R received a phone call and rushed to the crime scene where his friend’s body still lay. He followed the ambulance to the hospital in the center of Juba, where a crowd of around two dozen people, mainly representatives from the media and relatives of the deceased, gathered around the entrance of the mortuary. Moi’s body was wheeled out covered in purple fabric. The following day it was taken to his home village for burial. He was 27 years old, not yet married, survived by his girlfriend.

“When we arrived, every media outlet was there, including the head of the journalists’ union,” says Grant McDonald, a Canadian journalist who through his work with journalists for Human Rights has trained more than 200 South Sudanese journalists in the last two years. “Journalists were talking fearfully,” he says, even as they interviewed family members and each other.

It was outside the morgue that the reporters decided to stage a media blackout. McDonald says the sentiment was “make sure this is reported everywhere and make sure they know how we feel.” For the next 24 hours, publishing was shut down in the country as the journalists demanded the government move quickly to find the killer. The government-run media outlets kept operating as if nothing had happened.

For McDonald, Moi seems an odd target. His recent work at The Corporate, a weekly business newspaper, was “nothing too controversial,” mostly stories about new businesses coming to town and local entrepreneurs. According to The Corporate’s publisher, the newspaper was not the target of threats.

It’s possible that Moi’s murder and the timing of the President’s threats could be a coincidence. But few of South Sudan’s embattled journalists are taking it that way. Moi’s death brings the number of journalists killed this year to seven, most of whom died in a single rebel attack on a convoy earlier that year. A couple more are missing.

Local journalist Clement Lichio has been missing for two weeks. He was, according to a colleague who was detained with him before being released, arrested by state security agents. The driver of the car he was in was later found dead. Lichio’s family is so sure of his death that they have performed his funeral rights in absentia.

This fear has greatly impacted how journalists do their work. R says his radio station used to have broadcasts at 7 and 9 at night but now they pre-record the segments and leave the office by 4 to get home before dark. He no longer wears anything that could identify him as a journalist, removing the station’s logo from everywhere, including his equipment. In fact, he has ditched his professional microphone to record interviews on a recorder small enough to disappear up a sleeve. “The audio quality is fine,” he says defensively.

But even appearing in public is too much for some journalists. For W, a South Sudanese stringer for a foreign press agency, the recent events have made him afraid to show his face outside his house or car.

“My day to day work is now mostly on the internet,” he says. “Instead of going into the field I do what I can using my phone. It’s now a struggle to get information, to find the truth.” W scrupulously records every phone conversation he has in order to cover his tracks. He suspects that his phone is now bugged, possibly taking away his last opportunity to report.

“If I had the capability, I would try and leave the country, sincerely. Maybe my plan is today maybe tomorrow. I am worried, this could be my time. It is very difficult. My wife is expecting and I don’t know where I can run.”

Aaron is a freelance journalist based in New York covering cities, culture and African politics. Follow him on Twitter at @aaronleaf.