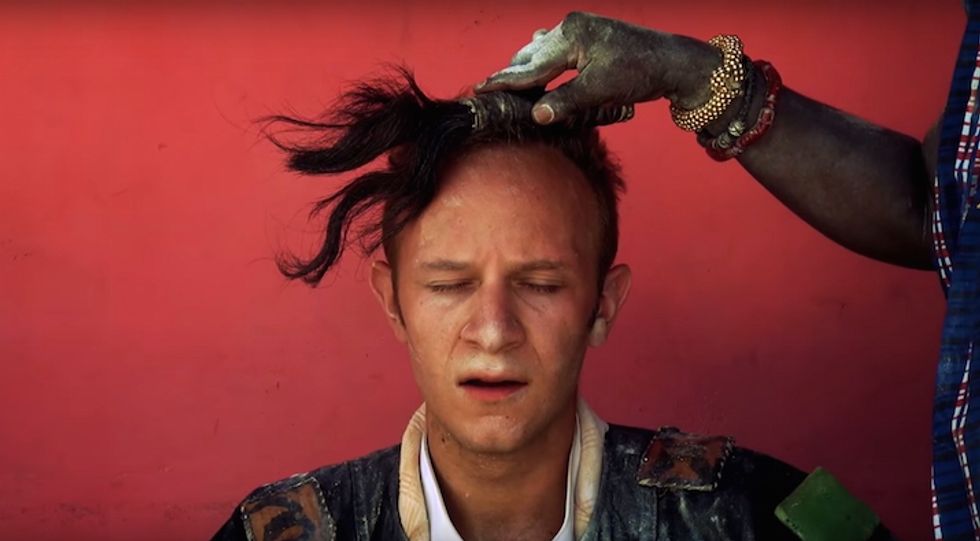 Picture this: A white American man travels to West Africa, gets cast in a Nollywood film, and is possessed afterwards by a ghost. This is the plot of PASTOR PAUL, a film that director Jules David Bartkowski is calling the first of its kind—or more specifically, "the world's first American Nollywood film."

Filmed in Ghana and Nigeria in 2013, PASTOR PAUL explores the intersection of New African cinema, Christianity and witchcraft, while lampooning classic images of the white man in Africa, whether he be a tourist, missionary, actor, or ghost. Bartkowski stars as the titular character Pastor Paul/Benjamin alongside Wanlovthe Kubolor, of Ghanaian hip-hop duo FOKN Bois, and Nigerian musician Funsho Ogundipe, of the afrobeat bandAyetoro.

The film will premiere at the Alliance Française Accra in Ghana on September 26, followed by a concert featuring select stars from the cast. We spoke with Bartkowski via email to learn more about the making of PASTOR PAUL and his thoughts on the role the film might play in the larger Nollywood scene.

Patrice Peck for Okayafrica: You're calling PASTOR PAUL "the world's first American Nollywood film." Why? How is it not simply a Nollywood film?

Jules David Bartkowski: While Nollywood is an ever-evolving industry, the first two decades of this phenomenon produced films that often told very similar stories of aspiration, corruption and morality. A simplified version of this narrative might be the story of an ambitious villager who attempts to move to the capital city only to find themselves lost in destitution, leaving them no option but to turn to occult forces that will inevitably ruin their lives in the long run, even if it offers them short term gains. We tried to subvert and distort this narrative as our lead character arrives in the capital city, only to have occult forces thrust upon him against his will, and requires him to go deeper into the village, the traditional, the unknown.

Stylistically, as well, we tried to pace the movie in such a way as to slowly turn this character's life as a tourist in Africa into one that feels emotionally and cinematically like a Nollywood film. In addition to that, we used the phrase, "The World's First American Nollywood," to be sort of in chorus with Coz Ov Moni 1 & 2, Wanlov's two musical films with his group Fokn Bois, which they describe as the "World's First Pidgin Musical," and, "The World's First Second Pidgin Musical." Finally, I wouldn't say it was simply a Nollywood film because part of what's so special to me about Nollywood is that regardless of Christian morality or bad production value, Nollywood is a place for self-determined African narratives. This film is set deeply within the perspective of an outsider, and represents an alternative narrative of Africa that isn't often seen by outsiders.

How did an American filmmaker based in New York City end up directing and starring in a Nollywood film?

I met Wanlov and Funsho, along with several others who are part of the Pidgen scene in Accra, in 2009 when I first came here as a student. At the time, I was studying music and writing about contemporary Ghanaian Hip Hop, and spent time with them as they prepared for a tour called the Culture Caravan, that was essentially like an African Vaudeville show. These artists left a huge impression on me and we stayed in touch in the years after. In 2012, Wanlov sent me a funny article about a white guy in a Nollywood film, and when I had the idea that he should be possessed, I decided I wanted to make that film. I reached out to Wanlov and Funsho immediately, as well as my Director of Photography, Adam Abada, who is also based in NYC, and everyone was on board so Adam and I came for two months in the beginning of 2013 to shoot the film in Lagos, Accra, Kumasi and some Ashanti villages, as well. Casting myself in the lead role was more a matter of convenience and budget than anything else, but I also dreamed of being an actor in my childhood and spent many years studying the craft, so it was a joy for me to come back to acting in order to make this film.

Do you believe this film will impact the genre? And if so, how do you predict it will?

At this point Nollywood is so diversified with comedy, horror, romantic, and other types of films that I'd say Nollywood itself is beyond genre. However, I do believe that this film will have an impact on Nollywood filmmakers and filmmakers of the African diaspora around the world. This is a unique film coming out of Africa in that it has no trace of tragedy. This film depicts a young, hip, artsy, and intellectual culture in West Africa - artists who wont hesitate to ruin some random white guy's trip to Africa. It's also unique as a film about Africa made by Westerners (read: white people) in that the lead character Benjamin has nothing to offer, no plans to disrupt or invade people's lives, and instead of playing the savior, his agency and his control over his own life is taken away piece by piece throughout the film. I think this imagery alone will be empowering to Africans around the world, as well as anyone who's in solidarity with these ideas and not of African descent - like myself.