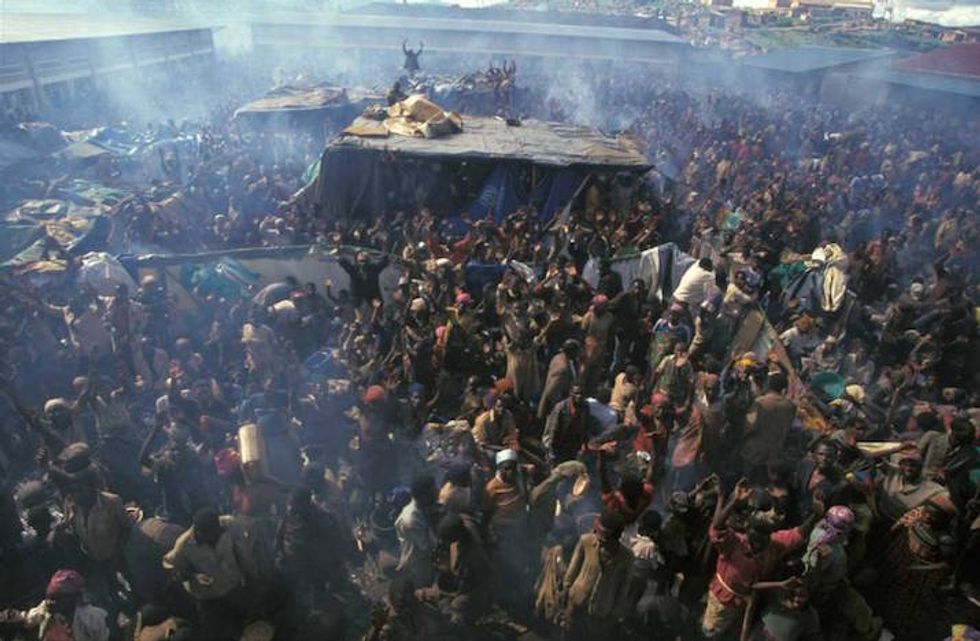 How a photograph from a refugee camp and a Kanye Rwanda connection has added controversy to the Yeezy Season 3 fashion show.

On Thursday, more than 20 million people tuned in to watch a livestream of Kanye West’s New York Fashion Week Yeezy Season 3 clothing line presentation, in which the rapper also debuted his new album, The Life of Pablo. That I’m sure you already knew.

But as TIME reports, it was a 20-year-old photograph taken at a Rwandan refugee camp that served as both the invitation and inspiration for the show. According to TIME, the original image, taken by British photographer Paul Lowe in southern Rwanda in April 1995, documents a scene of thousands of Hutus crammed into a small area of the Kibeho camp shortly after Tutsi soldiers massacred thousands of people there.

The photo resurfaced this week when Kanye announced his Madison Square Garden show, where he and Italian conceptual artist Vanessa Beecroft would go on to present a fashion show inspired by Lowe’s photograph.

It seems the photographer had no qualms about the Kanye Rwanda connection and use of his photo. “When my work gets picked by other cultural forms and used to explore the edges of what social politics are about, it’s quite interesting,” Lowe tells TIME. “If people want to find things in my work that is relevant and useful to contemporary issues and contemporary politics, that’s great… And the fact that an image that is 20 years old can still resonate today is indicative that there’s still a lot to do.”

One woman who actually appeared in the show had a different take. In a Yeezy dispatch for Jezebel, an anonymous writer details the bizarre experience she had as one of Kanye’s extras, in which she and her fellow participants were instructed to “channel Rwandan refugees.”

I think legally they can’t be like, only black models. That was never discussed. But I started to notice it as we were loading on the bus, and then I definitely realized it when we got to the warehouse. Like, there’s not one white person, even Asian, Hispanic.

I remember texting my friend on the bus, like: “I honestly feel like Kanye’s about to make some political activist statement and if he has me up here dressed like a slave to make some sort of blactivist moment, I’m gonna be so pissed.”

And it turns out, one of our instructions was that the theme was channeling a Rwandan refugee camp. We were Rwandan refugees. At this point, my mind was so blown. I was exhausted. I had been standing around for hours. I was honestly over it. I was like, I literally cannot believe Kanye has us out here dressed like refugees on this stage and we’re supposed to look sad and angry.

While everyone filled in the arena, we were covered with a silk tarp and once it pulled away, we’re in character.

She closes by stating:

There were people in the group that were like, “This is the best day of my life!” Mentally, it was tough because you’re figuring it out as you go along. You’re just expected to comply and follow. I felt like cattle. I felt like I was being herded into a concentration camp or something. It’s not something I would want to do again. But I wouldn’t say I regretted it.

It took almost an hour to get everybody wrangled together to turn in our looks and get our phones back. That whole process was when I really started to go crazy, sitting in this auditorium waiting for my number to be called. There was a point where I was like, “Fuck Kanye for this.”

Personally, I find this disturbing. His show had nothing to do with that moment in history. Kanye can sod off.https://t.co/vAqEPu671F — Alexander II (@Alex2Akande) February 13, 2016

so kanye used a pic of rwanda genocide for yeezy 3? y'all take images of real suffering to inspire a f***ing fashion show?

Have been to Hutu refugee camps in Goma &it is not a place you want to appropriate or remix into a mindless argument https://t.co/3UqWUVA7Bm