This Is A Review Where I Write About How I Think ‘DAMN.’ Is Pretty Good—A Classic Perhaps 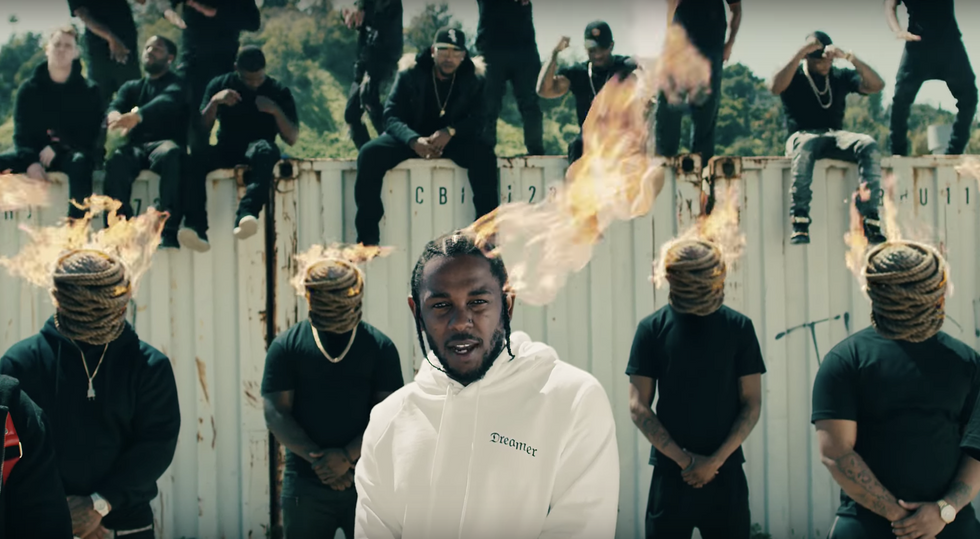 I’ll go ahead and give Kendrick Lamar's 'DAMN.' 9 and a half of Tupac’s bandanas out of 10.

This may come as a surprise after reading the title of this article, but, I’m just going to go ahead, risk it all, and say it: I think Kendrick Lamar’s new album DAMN. is very good. A classic maybe.

I will now recount the first time I listened to Kendrick Lamar, which was probably before you, to illustrate how cool I am and inadvertently how cool the person who put me on to Kendrick is:

We are waiting in a relief line, hoping we can get our hands on a loaf of bread. The year is 1933. The Great Depression is in full swing and life is rough. Back then we ate one meal a day. Usually brownish water soup. Sometimes, if we were lucky, water soup with salt.

My homie, who is also waiting in line with me, goes “aye, you listen to Kendrick Lamar?” I don’t know who he’s talking about so I take off my black cap, sagging from years of use, wipe the sweat from my brow, and respond, “naw, he a blues a singer?”

My homie tells me that Kendrick is sort of like a blues singer, but he’s actually a rapper and that, God willing, after we receive a loaf of bread from the generous Federal Emergency Relief Administration, we gonna go back to his spot, eat some bread, drink some moonshine, and fire up the phonograph and listen to the budding talent. “His cadence is crazy,” my homie tells me.

We at my friends shack, nibbling on stale bread and sipping very strong moonshine. My pal gets up and starts the phonograph. Dust blows up as a young Kendrick begins to rap that unique rap of his. Complete breath control, stinging lyrics, over pronouncing words, the T’s biting hard.

“Now, I may just be being a knickerbocker but I reckon this fella rap a lil’ odd,” I said because it was 1933 and that’s how we talked back then. But before the phonograph ended playing that K. Dot record I was hooked. He was different, something about him, it was refreshing, it was the perfect bridge of new and old, lyrical and ignorant, I fucked with dude.

Years passed, we fought in a World War, came back home, looked around and wondered if fascism was really defeated. We went to Canada to escape fighting that despicable war in Vietnam, saw riots, marched and yelled “Ho, Ho, Ho Chi Minh. The NLF is going to Win!”

Decades went by and our black did not crack. We listened to Overly Dedicated. We played Section.80 over and over, bumping it as loud as our car speakers would allow screaming “Fuck your ethnicity!” good kid, m.A.A.d city, wow, amazing, that shit slapped and was deep and had a story. Excellent. Then to the reaches of jazzy afro-futuristic space with To Pimp A Butterfly, what the fuck, shit was crazy. Kendrick only got better.

Then in 2017, with Donald Trump as President (how’d that happen? whaaa?) Kendrick dropped “The Heart Part 4.” A new album was on the way. I was juiced. Then the track and visuals for “HUMBLE.”

At the stroke of midnight this past Friday, over a glass or twelve of vodka and cranberry, the official drink of young white women, I listened to DAMN.

From “YAH.” to “ELEMENT.,” “LOYALTY.,” and “FEAR.,” on to “DUCKWORTH.,” the album is very, very good. It’s a pivot from TPAB, more accessible, less jazzy, more rap-oriented with plenty of homages to that REAL HIP-HOP™. Kid Capri’s on the album yelling the existential ad-lib “What happens on earth stays on earth!”

It's a pivot from TPAB, more accessible, less jazzy, more rap-oriented with plenty of homages to that REAL HIP-HOP™.
There’s bangers, there’s lines where you like “fuck nigga that was deep,” there’s a narrative, and there’s an insane plot twist. Many reviews and think pieces have already been written and will continue to be written about this project. For a more in-depth analysis, one with prettier words and more reflection, you should look elsewhere. All I’m finna tell you is this shit hella good.

As is expected, many are cautious, understandably, to call the newly released album a “classic.” It hasn’t even been a week since DAMN. has dropped. Hearing the first 45 seconds of good kid, m.A.A.d city I prematurely but accurately took out my phone and start texting my friends in a state of frenzied excitement: THiSS SHITSS Aa CLAASSIC NIGGGAFA YEEEeEE!!!!oMFG

I’ve since grown older, more restrained, calmer, cooler, my beard has connected. This time around, with the release of DAMN. my text read: Perhaps, this album will be included among classic album lists in the future. Yet, only time will prove or disprove such ponderings.

I’ll go ahead and give DAMN. 9 and a half of Tupac’s bandanas out of 10.
My only disappointment with Kendrick and his fourth studio album DAMN. is that there isn’t a second version. Y’all heard the conspiracy theories. If Kendrick had released a blue album on Easter, I would have myself died and resurrected from excitement with The Matrix playing in the background. Alas, my heart has been denied such joy.

Make sure to tune in next week when I continue to contribute to the blackhole of writing about DAMN. with a piece dissecting Kendrick’s line: “I'm a Israelite, don't call me Black no mo’/That word is only a color, it ain't facts no mo’.”