Kendrick Helped Popularize It, But We Need To Talk About The Complicated Ethiopian History Of 'Negus' 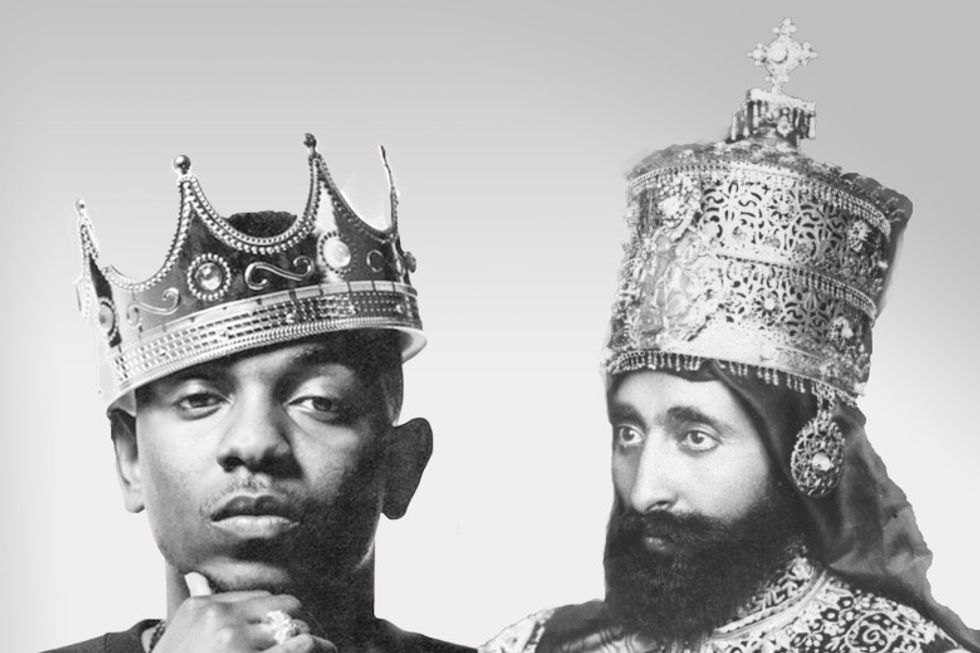 Kendrick Lamar helped popularize it. Now we need to talk about the complicated Ethiopian history of “negus."

May 2007. The 80th Scripps National Spelling Bee is underway. A contestant, a young white boy with an atrocious bowl-cut, is asked how to spell the word negus. There is a definition at the bottom of the screen.

“A king - used as a title of the sovereign of Ethiopia.”

He repeats the word, which Ethiopians pronounce, nuh-goose. His version, very much Americanized, sounds much closer to what some might call a select melanin proficient group of friends – niggas. The video goes viral.

I’m on my way to drink cheap whiskey with the homies. It’s unreasonably warm for December. I unbutton my coat and take long strides past 99-cent stores and expensive cafes.

I bump into an acquaintance who is with a friend. We exchange the usual pleasantries.

His friend curiously eyes me and asks, “Hey, are you Ethiopian?”

“Oh!” says my homie, who is white. His face lights up with a smile.

“My Negus!” He says jubilantly, attempting Amharic, the language my tongue first kissed, and failing.

Niggas, is what I hear.

I shake my head slowly, the word ringing in my ears. Damn you, Kendrick, I think, my face on fire, awkwardly smile, say my goodbyes and quickly walk to the alcohol.

I’m a few shots in now, Kendrick's new civil rights anthem "Alright" is playing and I’m thinking about the stinging irony of a white man calling me a word that means king but when spoken in English, the official language of cultural imperialism, sounds so much like slave.

Recently, negus has been popping up everywhere. Kendrick Lamar’s critically acclaimed To Pimp A Butterfly helped to popularize the word. Yasiin Bey’s track-listing screenshot for his new and alleged last album, provided by Ferrari Sheppard, is tentatively titled: Negus 1. YC the Cynicand the late Capital Steez of the Pro Era crew both have songs called "Negus."

The sentiment is understandable, and I ain’t trying to knock the aforementioned artists nor black folks in the U.S. that use the word, as I feel their intentions to be true. They trying to reconnect to their African roots, a history that was methodically ripped from them. It’s lightweight a beautiful gesture to use the word. To proclaim, in a society that systematically and ruthlessly degrades black people, that we too are humans - naw fuck that. We kings. So, no shade towards them.

I get it, the want to offer negus as a linguistic forbearer to the colloquial nigga and it’s brutal hard R predecessor. Despite this want, the word originates, most likely, from the Latin niger and/or the spanish and portuguese negro—black. I can appreciate the want to reclaim the word, to give it further significance and justification as a term of endearment by attaching king to its meaning, and particularly in the historical context, the symbolic associations that the modern nation state of Ethiopia evokes—freedom from white supremacy, manifest destiny and its colonial roots.

But I do implore people to connect further with the Ethiopian history evoked when using the word, a history that is both beautiful and inspiring in relation to fighting European colonialism, yet marred by a myriad of injustices inflicted upon the masses of regular every-day Ethiopians by a long list of negus.

“My beautiful brothers and sisters, we come from Africa. We are from the land of lions and eternal sun. Africa. Africa. We were all kings and queens, gold flowed down our powerful rivers until…”

Negus as nigga continues in a long line of fetishizing a historically inaccurate depiction of a monolithically same Africa. It diminishes the multiplicity, complex history, rich, diverse and vibrant culture of the continent, it’s not a country – in all of its beauty and pain. Although a difficult task, we need to do better in our understanding of the continent, which includes not throwing around pseudo facts or half truths, so to build a bridge of solidarity between Africa and its diasporic children in an effort to fight for social, racial and economic justice.

I want to stress that this goes both ways. Africans do similar things to African Americans in ways that dangerously teeter a twisted internalized hate that utilizes the rhetoric of the right and is projected, harshly and unfairly, upon black Americans.

Allow me to bring some insanely tall ancient California redwood tree all-enveloping shade. Enter the last officially recognized negus: Tafari Makonnen Woldemikael, aka Lij Tafari Makonnen, aka Ras Teferi, aka Janhoy, aka Talaqu Meri, aka Conquering Lion of the Tribe of Judah, aka Abba Teke, aka Jah, aka Jah Rastafari, aka HIM (His Imperial Majesty), aka king – negus, aka probably Guinness World Record holder for person and deity with the most akas, aka king of kings, aka Negusa Nagast aka Haile Selassie I.

Selassie, who is still revered by many Ethiopians and thought to be Jesus reincarnate by Rastafarians, is purported to have been a direct descendant of Queen Sheba and King Solomon and thus ordained on this antiquated and backward basis to be the Emperor of Ethiopia and to maintain absolute control of its ‘subjects’.

Selassie presided over a decadent feudal oligarchy with the overwhelming majority of Ethiopians frozen in a serf caste system of servitude and poverty with little to no chance of social mobility. Dissent was not tolerated and was met with torture and public hangings. As much of the country struggled to make ends meet Selassie’s gluttonous extravagance in the form of massive banquets in his large luxurious palace was appalling. He funneled fortunes into privately held foreign banks and hid a devastating famine that claimed the lives of tens of thousands of peasants from the urban middle class. Selassie’s Ethiopia maintained outright slavery, not abolishing it until after a moral epiphany induced by an Italian invasion during WW2. Selassie’s wealth was quite literally built on the backs of toiling peasants. Feudalism, is really not cool. Not then, and not now.

Some view Selassie as a benevolent ruler who stood up to fascist Italy—a bringer of reforms that pushed Ethiopia onto the path of modernization. Much respect and thanks to homeboy for fighting off the fascists and his eloquent speech pleading for assistance in driving back the invading Italians before the League of Nations but that and the public projects he initiated can not begin to make up for the crimes committed and his propagation of the inhumane system of feudalism well into the twentieth century. The reverence of Selassie by Ethiopians may be attributed to an unfounded nostalgia as unpopular regimes, not much better or perhaps worse, than Selassie's have since followed.

Negus isn’t what we should aspire to, no matter how convenient the lingual similarities between this title, which, I believe, denotes massive inequality, feudalism and suffering, and a word we often use (nigga), for better or worse, to address one another.

This past Monday, at the 58th Grammys, Lamar’s electrifying performance evoked African and African American unity in the face of a similarly shared oppression. On TPAB, which garnered eleven grammy nominations and five wins, Lamar has a track called "King Kunta." This track as well as much of the album links African Americans to Africa, the home from which they were stolen and transported to strange and hostile foreign lands to become slaves, their history and culture denied from them and their descendants.

The stellar performance was an example of a union that is not only possible but necessary for our collective fight for our humanity, justice, and liberation. We are kin, one in the same, and we have a lot to learn from one another. In a continent that is home to such a long list of people that have done amazing things to positively advance Africa and humanity, let’s not idolize those that have done otherwise, like Selassie. Let’s not easily forget. We need equality among one another, not rigid hierarchy. We need each other. We don’t need new kings.