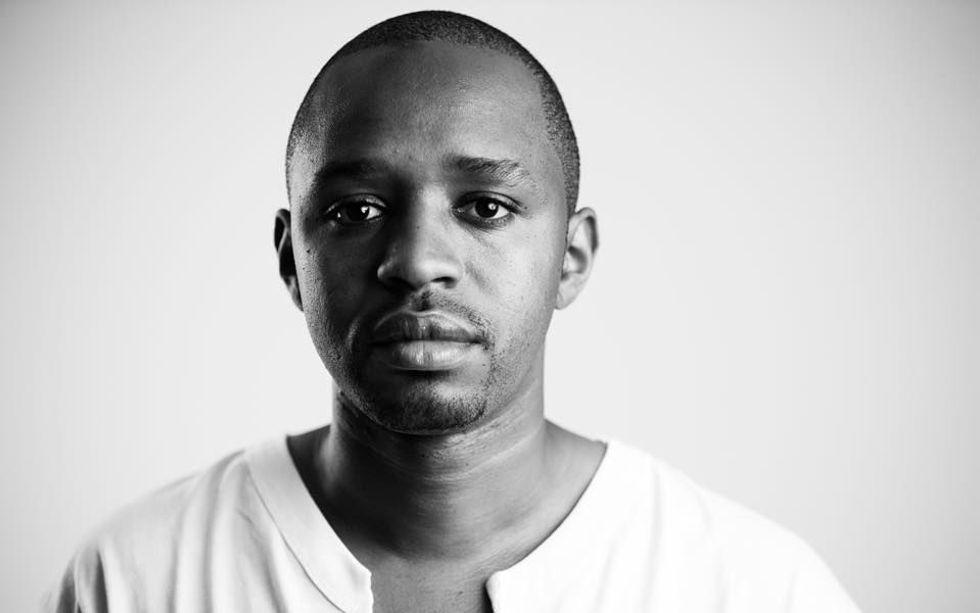 Boniface Mwangi has come a long way from being the “softie” teenager arrested for sweeping buses in downtown Nairobi, and later exposing malpractice at his high school. It’s no secret that the photographer is one of Kenya’s most polarizing personalities for his bold protest tactics, which involved throwing fake blood on police service spokesman, Charles Owino, using pigs to denote the greed of Kenya’s handsomely paid members of parliament, interrupting an address by former President Mwai Kibaki in 2009 and putting President Uhuru Kenyatta’s alleged drinking problem on blast—to name a few incidents.

Before the launch of his coffee table book, I find Mwangi and his wife, Njeri, personally greeting attendees at the entrance of the Magnum Foundation office building in Manhattan. In between questions about political aspirations, and publishing UnBounded, he stops and acknowledges every single guest who shows up for him. That kind of personal touch is also evident in his latest work.

The former journalist’s book launch is an amalgam of professional and personal photographs that weave an interesting life. From growing up with a stunning single mother who gave him his first camera and later joined a cult, to his grandparents who were freedom fighters but never shared their experience publicly. “They were embarrassed that they fought for freedom and said nothing.” The documentary photographer curates a powerful collection of images that have made him one of the region’s leading professionals.

There are pictures from Kenya’s 2007/2008 post-election violence that featured in a traveling exhibition (#PichaMtaani) around the country, that moved citizens. The book shows a man whose early experience with poverty and injustice led to his prominence as a human rights artivist, but an enemy of the political elite.

Mwangi reminds the New York audience that January 18, the date of his book launch, is the eve of #OccupyPlayground. Two years ago children protested the land grab of their primary school, which was linked to the deputy president, William Ruto. Since then, a public feud has ensued.

The politician sued Mwangi for defamation late last year for tweeting that Ruto was behind the murder of a Nairobi businessman, but the activist refuses to apologize, retract or correct his claim. Mwangi and his lawyer simply said Ruto has “no reputation worthy of any indulgence of the court of justice either in Kenya or elsewhere.”

Speaking to the diverse audience, Mwangi said of discovering the news: “I was in Ghana, at a friend’s house, [when] the deputy president of Kenya went on TV and called me a drunk—he just insulted me. My mentions were just going crazy, I decided to respond to his remarks and said, ‘he’s a thief and a murderer.’ He was very upset. I was at my desk when the letter came and said that he’s going to sue me—I laughed about it.”

What is no laughing matter to the photographer is his next chapter: pursuing politics. Mwangi is vying for the Starehe seat as a member of parliament this year. On his official website, he states: “I have relentlessly challenged the establishment for their failed governance. Now I want to continue the fight from the inside.”

In person, Mwangi addresses concerns that he will be engulfed by the money and power: “I’m not going to tone down! [Laughs]. I’m actually vying so that Parliament can give me an amplified voice. I want my voice to become louder [shouts]!” Adding: “If 100,000 Kenyans elect me, I’ll be speaking for 100,000 Kenyans—you can’t say I’m speaking for myself.”

The activist prides himself on going to public hospitals and being ethical. “I want to be able to demand a pay cut—we need to cut the salaries by 50 percent. When you get elected in Kenya, you get a car grant of about $70,000. That needs to be removed. It’s legalized theft. When you get elected you get a bodyguard to keep you safe. That should be removed. Members of parliament don’t need bodyguards, serving the Kenyan people is not a risky job and if it’s risky, they should make the entire country safe, not just for themselves.”

Mwangi’s 2017 goal is to continue speaking for the voiceless and encouraging Kenyans to be more politically active and vote for real social change.