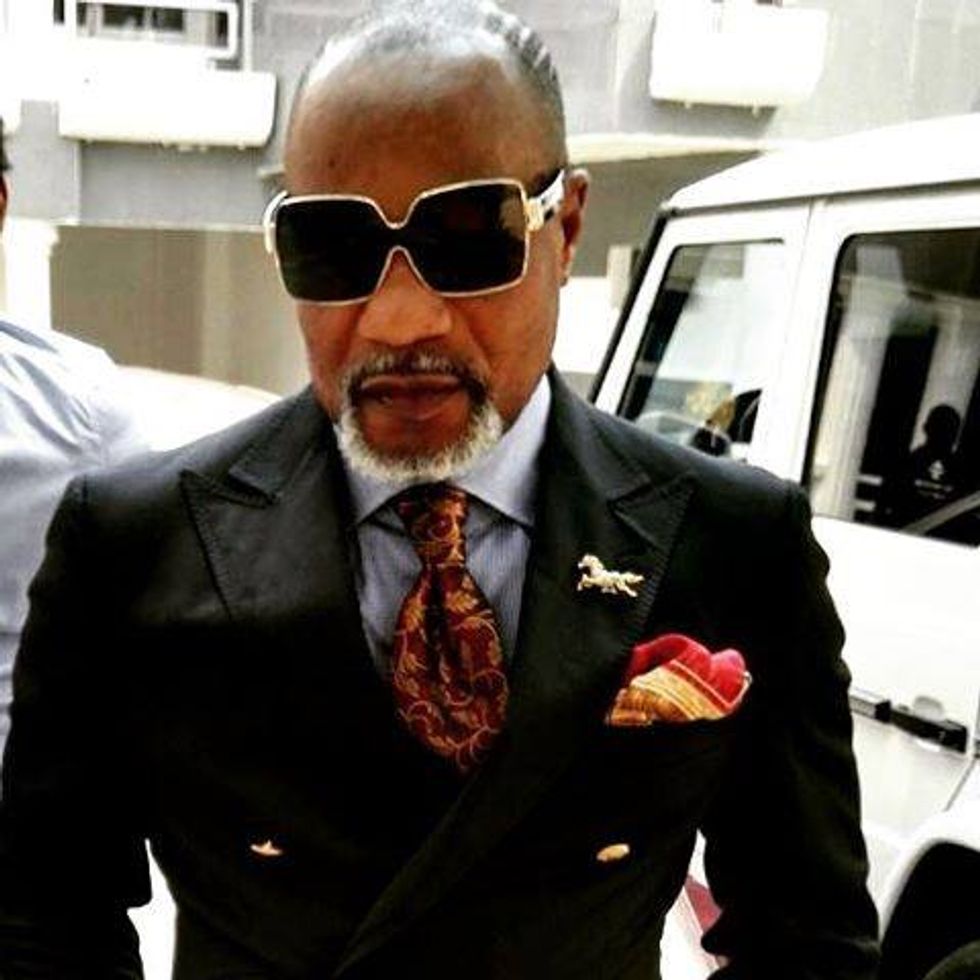 Police showed up at the 60-year-old Congolese Rumba star's residence in Kinshasa, DRC to arrest him for an alleged assault at the Nairobi airport Tuesday morning.

A Kinshasa judge is deliberating whether to press charges against Olomide for reportedly assaulting one of his female dancers after a video showing the  Congolese megastar kicking a woman, identified as Pamela, in the stomach at Jomo Kenyatta International Airport in Nairobi last Friday went viral, BBC reports.

The incident cut the musician and three of his dancers' Kenyan trip short Saturday and led to their immediate deportation after spending the night in police custody.

Kenyans on Twitter weren’t having it. They tweeted up a shitstorm, calling for his immediate arrest and deportation.

Koffi Olomide, assaulting a woman at Nairobi airport? Shocking and disgraceful. Why was he not charged and jailed? pic.twitter.com/OsRIr8EK50

Koffi Olomide should be jailed, deported and banned from coming to Kenya.. Coming kicking a woman on our soil is demeaning to Kenyan our law

Is that lady assaulted by Koffi Olomide Kenyan? If yes.he shouldn't be deported, he should be jailed. Only fools can beat ladies

Koffi Olomide kicked an unsuspecting lady in a vital area. He deserved more than just deportations from Kenya. He should have been jailed.

Initially, Olomide denied the assault, and his attorney claimed the artist was manhandled by police.

But under mounting pressure from social media, Olomide issued an apology in a Facebook post Monday, referring to the incident as a “moment of madness.”

Once again I would like to apologize to my friend(s), brothers, sisters, fans and especially to the WOMAN and CHILDREN, I beg you to give me your forgiveness. ‪#‎KoffiOlomide‬

Olomide may have thought the hot situation would cool off, but that’s until police showed up at his residence in Kinshasa, DRC to arrest him for the alleged assault, Tuesday morning.

His lawyer, Landry Tanganyi tells the BBC that it's unnecessary to detain Olomide overnight as he poses no flight risk, but the 60-year-old singer has been ordered to stay at a police station.

According to Daily Nation, word from Kinshasa is Congressman Zakarie Bababaswe filed a petition on behalf of the Congolese people to have the Rumba ace punished for the incident. And in a televised press conference Bababaswe spoke on the matter, questioning why Olomide was “still walking scot-free and yet there was video evidence that he assaulted his dancer in Kenya?”

Apparently, Olomide and the Bababaswe were former friends who had a falling out over song lyrics that dissed the congressman.

The attorney-general ordered the singer’s arrest, and the news has been celebrated by those who feel strongly about protecting women’s rights. The full details of Olomide's sentencing remain unclear at the moment.

Olomide’s concert at Zambia’s Agricultural And Commercial Society for its 90th anniversary has been cancelled in response, and he has been replaced by his musical rival Werasson.

Moral of the story: Keep your limbs to yourself. And turn a friend into an enemy, it could come back to kick you.

Hello koffiphils and Koffillettes. May the righteousness of man be just and fair.