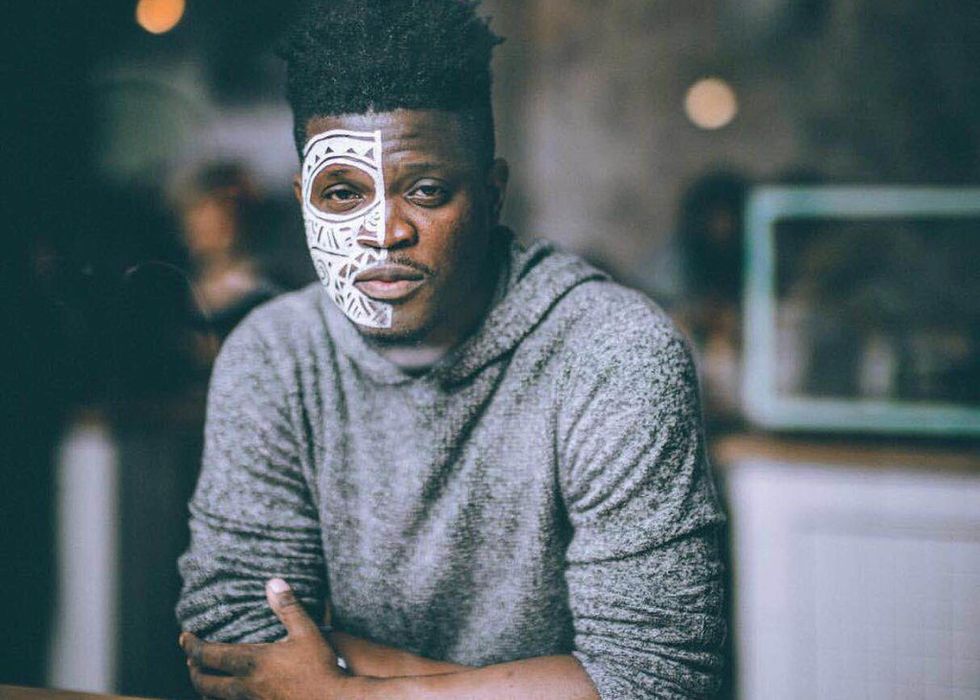 In an open letter, Nigerian visual artist, Laolu Senbanjo calls out Damien Hirst for creating a carbon copy of an Ife sculpture in his latest collection without crediting the source.

This morning, Nigerian visual artist, Laolu Senbanjo, sent out a letter he wrote to British artist, Damien Hirst, calling him out for appropriating Nigerian art in his latest collection "Treasures from the Wreck of the Unbelievable,"currently on display at the Venice Biennale. Hirst—who is currently the U.K.'s richest living artist—created a replica of the Ife sculpture, "Ori Olokun," but failed to credit Nigeria or Ife as his source of inspiration.

This is certainly not the first time that plagiarism in the art world has come at the expense of black artists. It's an ongoing problem that erases the contribution of art from the continent and the diaspora.

Senbanjo addresses this and more in "A Letter from one Artist to Another." Read it below, and stay posted for more on this story.

You may not know me but I know you.  My name is Laolu Senbanjo; also known as Laolu NYC.  I am your contemporary, a visual artist based in Brooklyn who just happens to be Yoruba from Nigeria.

You see, as an artist we all pay our respects and give homage to different artists in all our works at some point in time.  In fact, I helped bring Beyonce’s vision to life in her visual album, “Lemonade” which was an homage to her ancestry and paid tribute to the Yoruba culture.

However you did not give an interpretation, you created a flat out carbon copy.  I refuse to sit down and be quiet about what you are doing in Venice.

To quote you Mr. Hirst, “with all the liars running our governments, it’s far easier to believe in the past than it is in the future.”  Who’s past should we believe?  Is it the German Anthropologist (Frobenius) who claims the Yorubas were far too primitive to create such beautiful things or is it we the descendants of the Yoruba people who know our own history and can recognize a counterfeit when we see it.  This body of work, Treasures from the Wreck of the Unbelievable is an unbelievable pile of cheap knock offs.

Damien, who do you think you are that you can literally just outright steal, imitate and appropriate my culture?  As a Yoruba man, I consider myself a keeper of my culture and my art also reflects that.  How would you feel if I started creating copies of your work, then claimed that you were incapable of creating such beauty, because White people are degenerates and feeble minded.  As artists all we have is our integrity.  As an African my culture is everything to me.  It drives me crazy when people see Africa as a commodity, something to be bought and sold and yet never understood.  Africa is a continent, not a country with so many languages and cultures.  My people, the Yoruba are some of the most prolific individuals that have graced this earth and to make replicas of our antiquities and pass them off as your own originals is sacrilege, racist, ethnocentric, and down right dirty.  You should be ashamed of yourself.  You did not discover Yoruba art and it’s people.  I am also extremely disappointed in the curators that allowed this to happen.

Apparently, you’re past your prime because you cannot create something original without stealing from others. Just because the Artist is Unknown does not mean we don’t know where it came from and what it represented. Did you know the significance of the figures that you copied?  Why did you choose them?  It’s funny that you make comments about Trump yet you are doing the same as he is, making alternate facts.  Venice is one of the largest art platforms in the world, some of the kids attending are going to be art history students someday and when they see what you’ve done they can’t unsee or unlearn your version of the history of my people.  They will believe what you’ve fed them.  You don’t know how far and wide your art will spread; because of your stature and your white male privilege you should not be ignorant about the impact of your art in the world.  Now, you are imposing yourself and infusing yourself into our history, when we are struggling to make our own mark and names in this industry that is dominated by people like you (white men).  Is it not enough that this art was stolen from us by the colonial rulers who came and destroyed our civilization(The Brits), our culture, our religions, and pilfered the culture and the artifacts that represented it.  This is double jeopardy, first your forefathers conquered and stole our people and our art (which we still have not received it back)and now your weapon has changed, it’s no longer guns, you're using your status to steal what’s not yours and claim it as your own original art and ideas and profit off it.

How can the man that comes from the country where Stonehenge exists, a landmark phenomenon that is still shrouded with mystery deny the possibility that the Yorubas could create artifacts of our great Kings?  Is it that you think Africans are not capable?  You have the audacity to perpetuate the idiotic logic of Frobenius stating that this art must be from Atlantis because the Africans are too primitive to create such beauty?  And then you create an exact replica of one of our Ooni’s and say it may be a copy?  May be???  Like, it’s a complete perfect copy.  Who do you think you are that you can go and create and profit off of my people and my art?  Isn’t being colonized once enough?

I wonder if Pharrell, Disney, or the Greeks and Romans (and countless others you’ve ripped off) are as offended as we are?  Damien, you’ve messed with the wrong people.  No more appropriation.  Enough is enough.  You are ripping off bronzes of our Kings.  No more stealing from my people and denying our excellence, let alone our existence.  Do you not realize the sacred symbolism of these pieces of work for example, the one you called, “Golden Head” is actually called, “Ori Olokun” which is named after the Orisha (God/Goddess) Olokun who is the God of Great Wealth and the Bottom of the Ocean and can be either male or female.  “Olo” meaning Owner and “Okun” meaning Ocean. For the Yorubas, this work of art is sacred as it holds the passageway for the living to be able to connect with their ancestors.  The original removal of this artifact was a crime to the Yoruba people and to re-create such a significant and important sculpture without truly understanding how sacred  it is, it’s value and importance to it’s original owners, not sharing that information and just washing away it’s importance that it holds to the Yorubas, a group of over 40 million people within Nigeria (not counting those in the diaspora) is just horrendous.

As a Brit you should understand the importance of royalty and kingdoms.  Why didn't you make a bust of the Queen?  Oh wait, that would be wrong, right?  It would disrespectful. Right?  This only shows us what you really think of Africans?  You just want to drown us, make us disappear, rewrite our history to include you.

I find it very curious that you chose Frobenius, an open racist thief of antiquities  as your source of knowledge and information about the piece you call, “Golden Heads.”

Here is a direct quote from when Frobenius first set eyes on the beautiful Ori Olokun in Ife, Nigeria:

"Before us stood a head of marvelous beauty, wonderfully cast in antique bronze, true to the life, incrusted with a patina of glorious dark green. This was, in very deed, the Olokun, Atlantic Africa's Poseidon.”

He follows this up with the following statement:

"Profoundly stirred, I stood for many minutes before the remnant of the erstwhile Lord and Ruler of the Empire of Atlantis. My companions were no less astounded. As though we have agreed to do so, we held our peace. Then I looked around and saw - the blacks - the circle of the sons of the 'venerable priest', his Holiness the Oni's friends, and his intelligent officials. I was moved to silent melancholy at the thought that this assembly of degenerate and feeble-minded posterity should be the legitimate guardians of so much loveliness.”

It is truly incredible that you have decided to quote and believe Frobenius, the man who believes that the Yorubas were not capable of creating something beautiful and therefore stole it because in his mind they were not deserving.  Unfortunately, by using him it appears that not only Frobenius but that you too, Mr. Hirst feel the same way about us.  Was no one else available?  No current scholars of Yoruba art?  Not one?  Really?  Do you think me and my colleagues like Victor Ekpuk, Victor Ehikhamenor, are we also degenerates and feeble minded?  Are we are not worthy of spreading our own art, culture and ideas in an intelligent manner to the world?