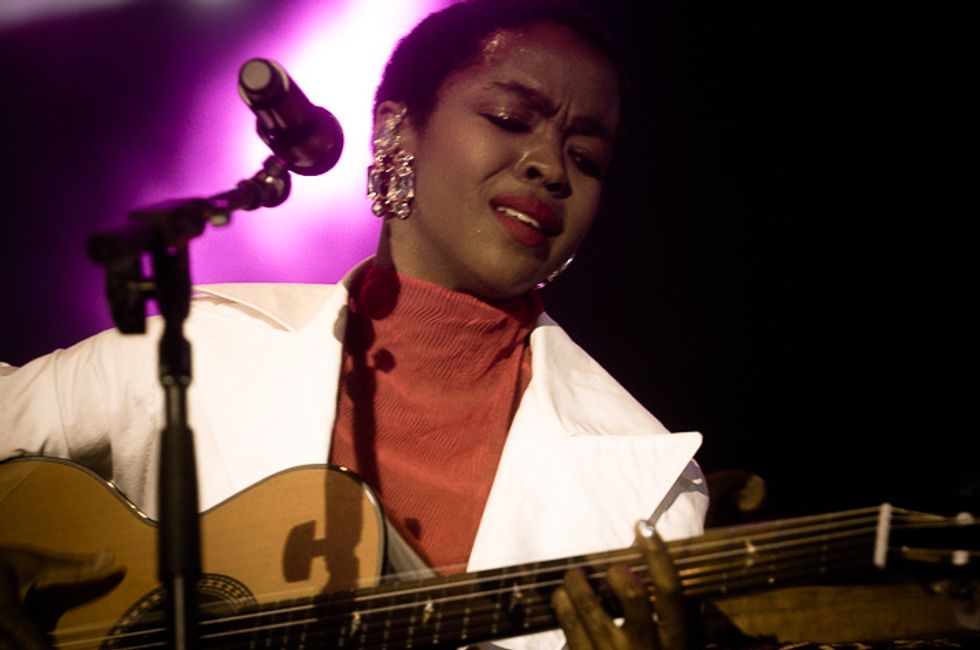 Check out photos and video from Lauryn Hill's debut Nigerian show and her visit to the New Afrika Shrine, where she was greeted by Seun Kuti.

Ms. Lauryn Hill made it over to Lagos last weekend where she played her debut Nigerian concert to a sold out crowd. Following a previous cancellation (and a striking apology video) for a planned show earlier this year, the singer made it to the Eko Hotel and Suites on Sunday night for a 2-hour-long performance backed by a 20-man band. While many concertgoers expressed their anger towards event organizers onsocialmedia for the late start of the show, things went smoothly once the star took the stage. The day after the concert, Ms. Hill, accompanied by her daughter Sarah Marley, paid her respects to Fela Kutiby visiting the New Afrika Shrine, where she was greeted by Seun Kuti. This wasn't the singer's first time performing in Africa, as she held her first show in Ghana late last year and has previously played in South Africa for Cape Town Jazz Festival, Rwanda, Ethiopia, and Senegal. Check out some photos and video from Lauryn Hill's concert in Lagos and her visit to the New Afrika Shrine below.

Ms. Lauryn Hill made her much-awaited Nigeria debut Sunday night with a sold-out 2+ hour performance in Lagos A photo posted by Okayafrica (@okayafrica) on Aug 30, 2015 at 10:35pm PDT

Last night at the African shrine. Real recognize real. She said ' to face the external u must master the internal' @ms_laurynhill @kirakarnival I thank the entire team for making it happen.
A photo posted by Seun Kuti (@shotsdboss) on Sep 1, 2015 at 4:46am PDT

Just before the show started a beautiful lady walked up to me telling me how much she loved my music, in her words "we ve been playing you songs in philly " , this sister sang the chorus of No Be You and I was blown away by her voice, soon I realized she was Lauryns back up singer. My life changed last night. I cried when Lauryn was performing and thinking,in my life time I see woman wey I use her songs learn work!!!!! She killed it! She gave me music life! So I got home and next thing my phone rings "waje Lauryn wants to meet u? I ran back like I was going to collect the certificate that validates the school of music life I have been in since, she took my hand and I cried all thru...... I'm so sure I embarrassed her but i had to tell her how grateful I am. Thank you Lauryn for music... Long story short, do your own with diligence and authenticity and you will save lives, inspire people to reach their goals as she inspired many singers and musicians. I'm so honored. Shout out to my sis @jbeautyfull A photo posted by Waje iruobe (@officialwaje) on Aug 31, 2015 at 3:27am PDT