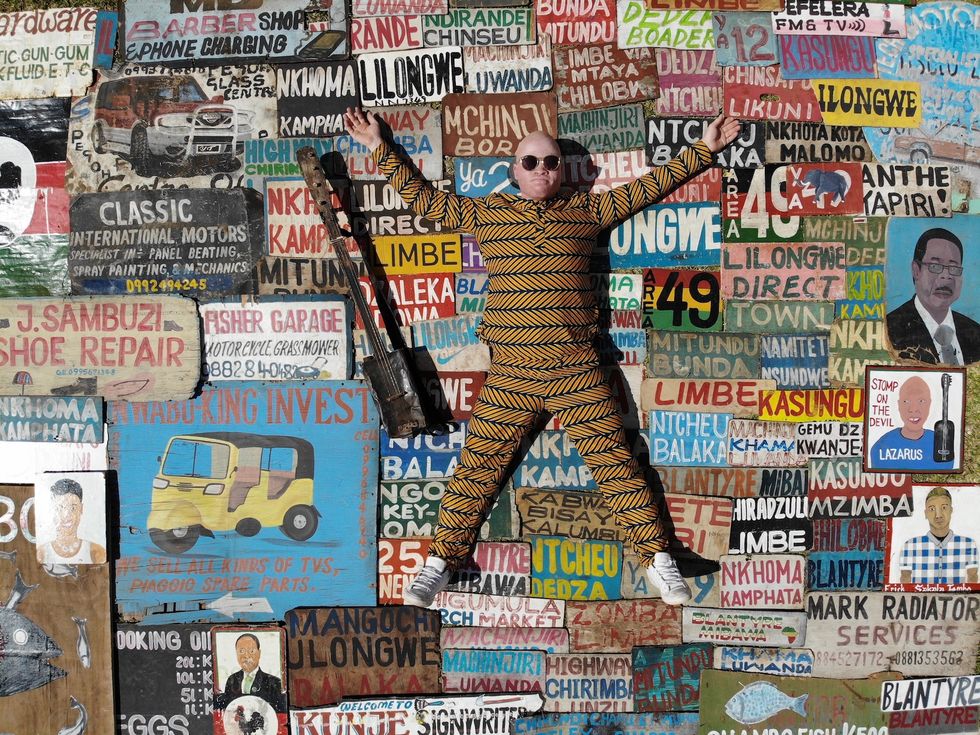 "This song talks about my life and my struggle, the dangers and discrimination I've faced because I have albinism. Now I have an opportunity to fight for the survival of my people," says Lazarus.

Lazarus is a rising artist from Malawi who's fighting for social change for people with albinism in his country, and across Africa.

He just released his debut album, Stomp On The Devil, which blends traditional Malawian styles with modern folk, all shaped by Lazarus' past as a street musician.

The 11-song record was produced by Johan Hugo, who you may know from his work with The Very Best, Baaba Maal, and Mumford & Sons, andwas recorded outside Lazarus' house to better capture the sound of the streets of Malawi.

As a person with albinism, Lazarus suffers a lot of senseless persecution in Malawi, an issue that's at the focus of the short documentary, Lazarus, which premiered at the Tribeca Film Festival this year.

Today we're premiering the new music video for "Moyo Wanga" released alongside Extinction Rebellion. The video, directed by Johan Hugo, follows Lazarus as he performs at home in Malawi, as well as across New York City, through rotoscoped footage.

"I wrote this song with my little brother Petulo when we had a band in the village about 15 years ago," Lazarus tells OkayAfrica. "Petulo also had albinism. Unfortunately he died from skin cancer and I moved to Lilongwe to try to make a living from busking. This song talks about my life and my struggle, the dangers and discrimination I've faced because I have albinism.Now i have an opportunity to fight for the survival of my people with albinism. We need to stop the hunting and killings of people with albinism now."

"Extinction Rebellion is fighting for the survival of our planet and all life," he continues, "Malawi has seen too much flooding and drought from global warming in recent years, and the danger we're facing with global warming is now jeopardizing the survival of my people in Malawi. we need to do big changes in the world to stop this climate emergency now too."

Watch the new music video for "Moyo Wanga" above and find out more about Lazarus here.