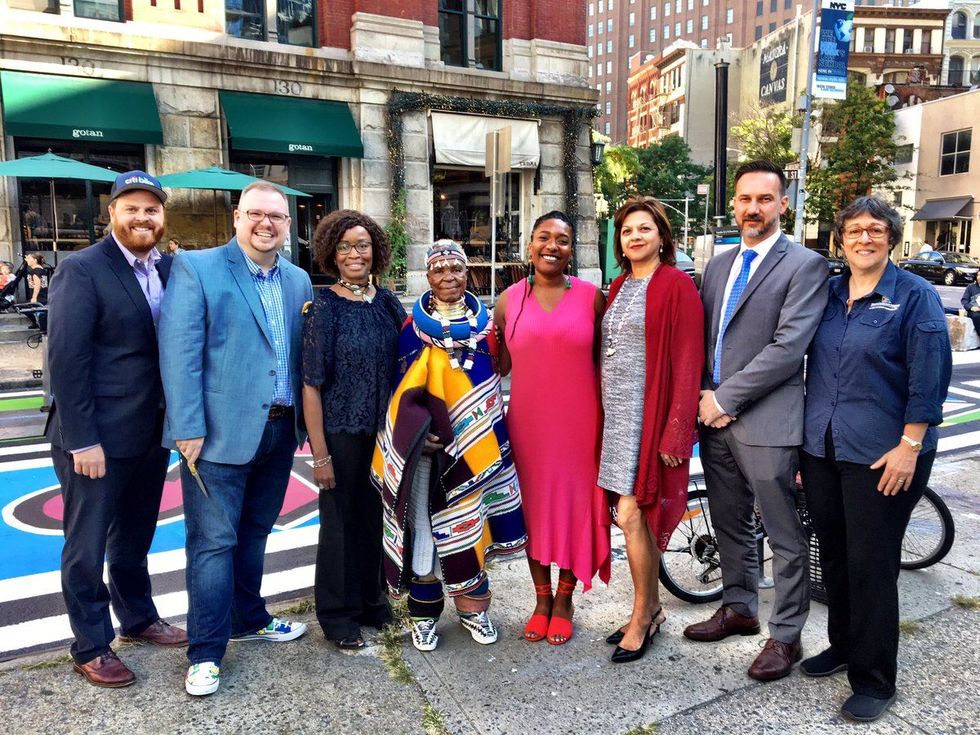 Esther Mahlangu, has been honored with a new mural, commemorating her bold and bright work in New York City.

Celebrated South African contemporary artist, Esther Mahlangu, has been honored with a mural commemorating her bold and bright work in New York City.

The piece is located in Tribeca and spans across two lanes, across Franklin Street and West Broadway's Citi Bike station, reports the Huffington Post. Muralist Imani Shanklin Roberts, modeled the painting after Mahlangu's famous Ndebele symbol work, and says that the painting evokes a "feminine energy." She shared an aerial image of the piece on her Instagram page.

The mural was unveiled last week, in a partnership between South African Tourism's US office, South African Airways and Citi Bike.

"Esther Mahlangu is renowned the world over for her unique, colorful and geometric paintings which have inspired international brands and artists of many backgrounds across the globe. Her work has also done an amazing job of showcasing our cultures and will provide New Yorkers this summer with a sight of South Africa's vibrant Ndebele culture," said Bangu Masisi, president of South African Tourism's Americas Hub, during the launch.

Ndebele artist #EstherMahlangu has been honoured with a mural dedicated to her work in New York City. #Womanpic.twitter.com/HsmD78jCgm

Check out some photos of the mural below.

When I first came to New York to attend @prattinstitute in 2009 I didn't imagine that this would be a city I would have a child in, create lasting memories in, let alone have success in my artistry in. Creating a mural in honor of an artist I've known all my life, in a city that isn't welcoming to many, feels unreal. It feels like an aligning moment many of us have when the universe cocreates with us and is in agreement with our path. To you NYC,I present Xola, (Stay in Peace) --((A South African Name I named my daughter--*Alignment*))) a piece that is representative of a feminine energy force that is all encompassing, inclusive and awe-inspiring. Xola welcomes you to charge and open your divine feminine here amidst all that tries to stand against you. This is my form of resistance and protest-- my expression. #blessed -- photo credit (@ericmtownsend )) THANK YOU!!

Xola @ XOLA ----- Xola (Stay in Peace) is representative of a feminine energy force that is all encompassing, inclusive and awe-inspiring. Xola welcomes you to charge and open your divine feminine here amidst all that tries to stand against you. #wowsouthafrica #esthermahlangu #citibike IM FLOATING IN GRATITUDE