You Need to Hear This Live Show From Les Amazones D'Afrique 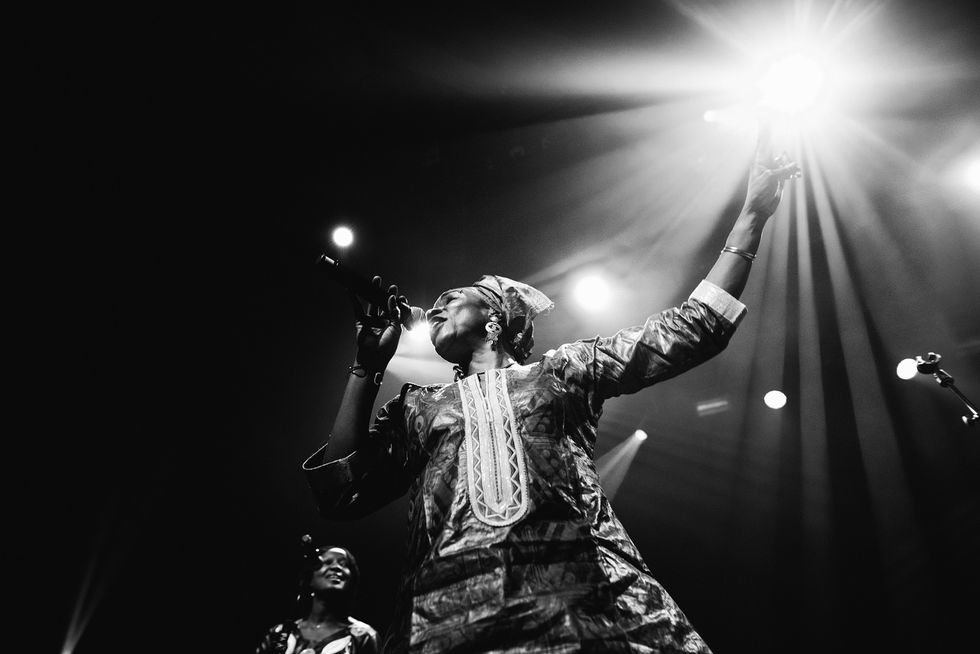 A concert dedicated to all women across the world suffering from violence.

Although sung primarily in Bambara, its politicized message of female empowerment resonates in a profound way. Since the album's critically acclaimed release on Real World Records, the music has made its way to elite global spaces like The Philharmonie de Paris and Barack Obama's iPhone.

Les Amazones D'Afrique performed at Le Guess Who Festival in Utrecht, Netherlands last November, and now we're excited to premiere a full recording of the set, provided by Le Guess Who, courtesy of Marc Broer. The nine-person band assembled for the Netherlands gig did not include some of Les Amazones' more legendary members like Angelique Kidjo and Mariam Doumbia, but their set still replicated the dynamic female energy of the group's recorded debut.

The eight-track set contains extended renditions of album highlights "Nebao," "Dansa Soyari," and "Doona" alongside beautiful unreleased tracks "Kanakasi" and "Ani Sogoma" and a stunning cover of the 400 year-old Sudanese folk song "Garaba Mama." This is an ecstatic, high-octane live album that opts for a more analogue, blues rock sound over the electronic beats and high fidelity studio production of République Amazone.

Before opening the set, Rokia took a moment to dedicate the performance to all the women of the world. Her presence onstage is magnetic and inspiring; she speaks to the audience throughout, giving them life and love with encouraging words and enthralling vocals. When Rokia's solo verse finally arrives during set opener "Desert Storm," her voice soars unmatched and cascades down with dazzling riffs of brilliant, bluesy soul.

The set's most exhilarating track comes later, though, as a group vocal effort during the sauntering blues-funk jubilee of "Nebao." It's got an irresistible hook, accentuated by frenetic desert rock riffs, and a joyous call-and-response chorus between the vocalists. Between the rough-edged blues arrangements and the powerful, expertly recorded vocals of our leading ladies, "Nabao" captures a special kind of magic not yet summoned by Les Amazones D'Afrique's studio material.