The Butler Effect: How Octavia Butler Changed My Life 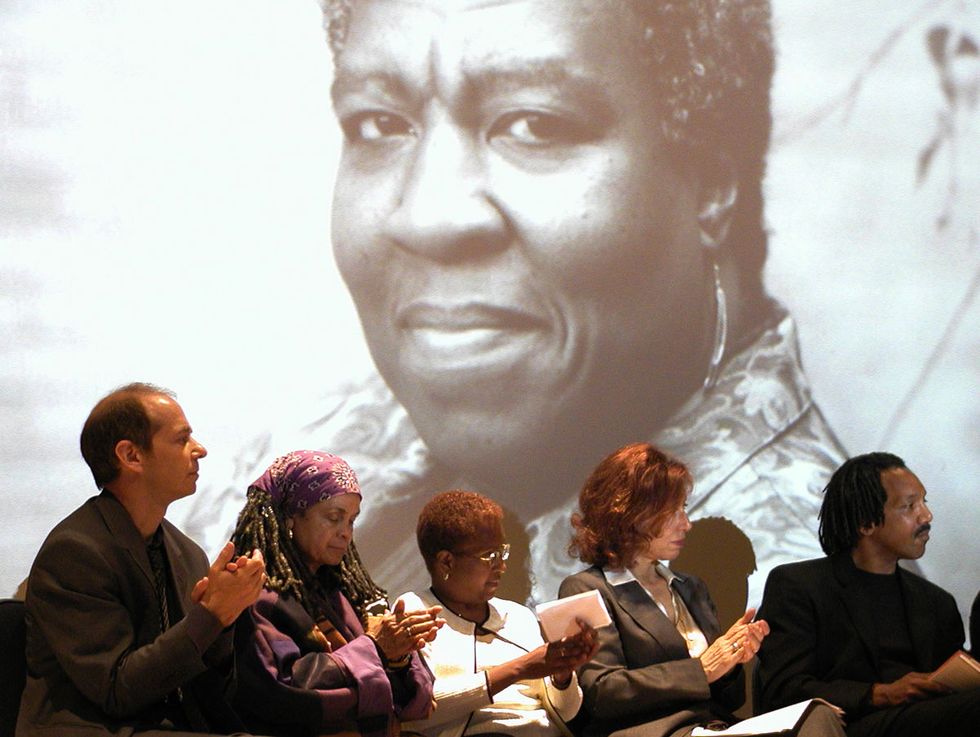 Excerpt from a new anthology of writing about sci fi author Octavia Butler and her power to transform lives.

1. I’m at a fashion show in my junior year of high school, a biracial Congolese-American geek surrounded not by Africans, but by African Americans. I don’t look out of place, but I feel it. Even the book vendor’s tables have nothing that represents my experience: second-generation halfrican raised in middle-class white suburbia.

‘What do you like to read?’ the vendor asks as I turn to leave. I pause and tell him, sure he has nothing for me – if there is spec fic with black anything, I’d have found it by now. To my surprise, he puts a book in my hands and says, ‘You need to read this. This book will change your life.’

I take it, sure he’s wrong, but see a bald, beautiful, proud black woman on the cover. I read the back of the book. The woman is African. I read the first paragraph and surface pages later: yes, she is African, older than my grandmother’s grandmother. Her journey will take her to America alongside the slave trade, and a race of black, mutant-superpower-wielding human beings will spin out from her and the man she meets in that first encounter. And the writing is good. Like, really good. I make myself stop reading and buy the book: Wild Seed. It’s the only Butler book he has. Some part of me must already have believed what the book vendor said, because those few minutes are fixed in my memory as a turning point, a revelation.

After Wild Seed, I devoured every Octavia E. Butler book our library had – perhaps why it didn’t strongly register that so few of the books I read for school were about black people. After all, in Butler’s worlds, I was represented: most protagonists were women and men who looked like me. I knew her characters, empathized with them, aspired to be them as they struggled through hardships and rolled and stumbled with the punches of living with other people and having superpowers. Butler taught me to write real people, to write flaws fearlessly, and to never pull punches on protagonists. She made me want to be a better writer. I learned from Bloodchild’s essays that Butler was a hardworking black woman who wanted to be a writer all her life. Those glances into her process gave me hope and inspired me to write as much as I could. She wanted me to write, her essays said, and if she could persist in her writing and write black protagonists in science fiction while being a black woman and do it all to critical acclaim, then maybe – if I persisted and worked hard – I could too.

2: I’m visiting Smith College, meeting women I don’t realize will remain some of my best friends to this day, and see an Octavia E. Butler book on my host’s bookshelf. It’s been signed. ‘She came to our Science Fiction class earlier this year,’ Mel says. ‘I think she’s friends with one of the professors.’ If that’s true, I think, she might come again, and I can meet her, and she can sign my books, and I can thank her for everything she has been to me. The next year, I take that class.

Before Butler, I wasn’t consciously aware that no one in the books I read – black or white – shared both my skin tone and cultural experience. I didn’t realize some speculative fiction was shelved with African American Interests because bookstores assumed such interests were necessary to read books with black protagonists, no matter the genre. It didn’t occur to me to question why my school assigned books with predominately white, male protagonists and authors; or why I, too, began in high school to write stories with predominately white, male protagonists.

3: I walk into Science Fiction with Bill Orem. We’ve just finished Imago. Hope, already at her desk, says, ‘Did you know Octavia Butler died last night?’ And I realize: I will never meet her now, can never thank her now, can never read any more than what she’s published. She was so young.

After Butler, I returned to female protagonists, and even started writing black and multiracial protagonists, people who looked like me, shared my experience, but lived fantastic lives. They had interracial queer romances and mixed families, they solved mysteries and dealt with racism and sexism and people they didn’t agree with, they rolled with or collapsed under the punches Butler taught me not to pull. Butler’s books gave me permission to write what I knew while still writing what I loved. I’d been reading white female protagonists all through elementary school thanks to teachers’ recommendations, and even written Japanese and Hispanic protagonists before the literary canon derailed me. But until Butler, it never occurred to me that a blind spot I had as a reader and writer was people who looked like me. My cultural experience was missing, and it belonged in speculative fiction.

4: I’ve been accepted into Clarion’s class of 2016, but can’t be happy about it yet; I’m still waiting to hear whether I’ll get the Octavia E. Butler Memorial Scholarship. Tuition is expensive – I can’t afford it – and my mother is willing to pay my way, but I see how hard she works for how little she gets, and I know it’ll cost her more than money. I slump into my car, tired from working closing shift at a local grocery chain for not much money myself, and check my email. I’ve been awarded the scholarship. I am an Octavia E. Butler Scholar. Adrenalin and joy wash over me. My name is associated with hers. Nothing can erase this. This connection is mine. To top it off, some of my tuition will be paid. I read the rest of the email, wondering how much I’ll still owe, and find out: nothing. It’s a full scholarship. I can live this dream without the guilt of borrowing tuition from someone who can’t afford it. I feel a sudden weightlessness with the threat of tuition gone. For the first time I am unequivocally happy about going to Clarion. Octavia E. Butler’s memorial scholarship has saved me. Once again, she is changing my life.

Butler dreamed of sending writers of color to Clarion, of enabling us to enter the speculative fiction field successfully, of throwing down ladders for us to climb. I found out being a Butler scholar was like being a king or queen of Narnia: once was for always; we were her legacy. I am so proud to be in that number, so proud and admiring of her goal to nurture young writers who, like her, wanted to write science fiction and fantasy, and deserved to have their stories heard. I went to Clarion to become a better writer and editor, and gain a community of classmates. I didn’t realize until my arrival that Clarion would connect me to a still larger community of previous graduates, spec fic writers and authors and editors, and a legacy of Butler scholars; it would open doors. Butler wanted that for writers of color. She dreamed of bringing us with her into the fold. All writing is political – it cannot be divorced from the society it comes from. Butler’s decision to write her experience as a black American into the dominant narrative of science fiction paved the way for others to do the same.

Like the little black boy who rubbed Barack Obama’s head, thrilled to discover the President of the United States had hair just like his, I read Octavia E. Butler and began to see myself in speculative fiction. Nowadays, most of my protagonists – and, thankfully, more of the protagonists I’m reading in romance and spec fic – are black or multiracial. Part of me does it to write what I know, but part of me feels obligated to put more stories with black protagonists out there, to push demographics in speculative fiction closer to representing the American population. I’ve also realized that while my experience as a black person is different from what people expect when they look at me, it’s no less valid in the social narrative – and if I don’t write it, it may never be heard. I’d be erasing myself. Writing, like the scholarship, doesn’t happen in a vacuum.

The push by We Need Diverse Books and others, the studies about representation and its effects on identity and aspirations in children, the statistics showing the disparity in demographics in TV and film versus the American population, the outpouring of joy when Obama became the first black president (he’s biracial, but this is America) – all of it points to the danger of media displaying a single, dominant narrative, and the necessity of changing it to include many voices, stories, and narrative threads. Octavia E. Butler dreamed of science fiction that reflected her experience, and made it reality. In doing so, she sowed seeds in the minds of others: you belong here, this can be your reality, there is a place here for you. The Butler Effect continues in me, and in every writer she enabled to dream of adding their voice to the literary narrative of speculative fiction. Butler bid the silenced speak, and we spin out from her, a powerful legacy.