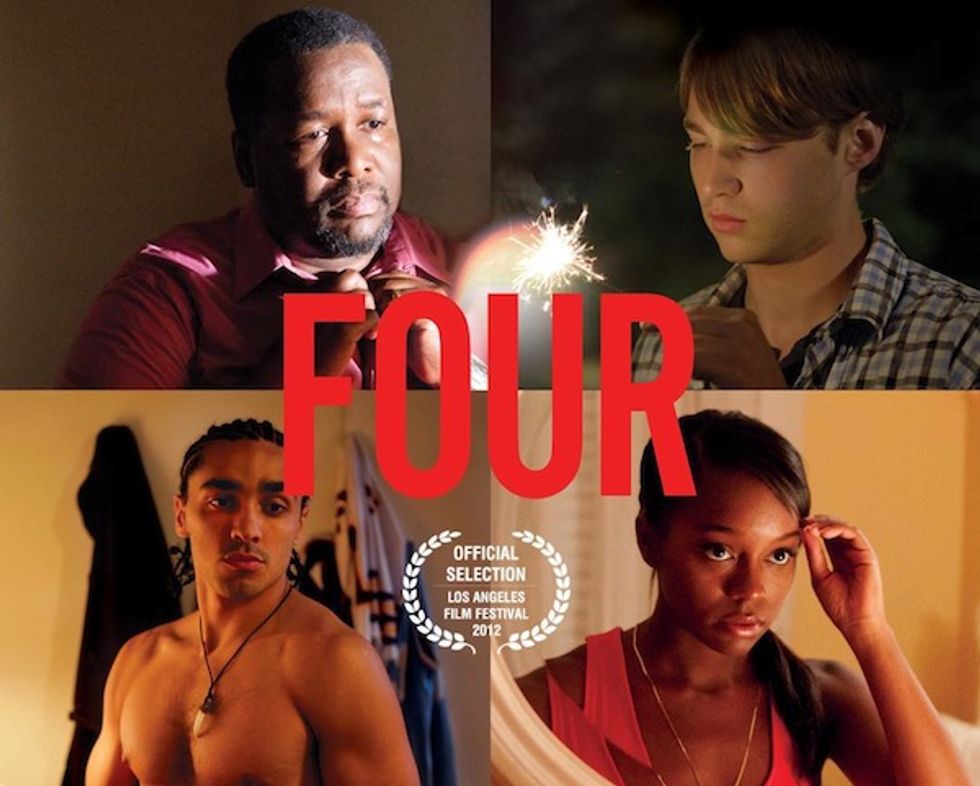 After its premiere last year in Newfest: the NYC LGBT Film Festival at Lincoln Center as well as a successful tour around the US capped off by a ‘Best Narrative Feature’ Award at the 2012 Urbanworld Film Festival, Four, the debut feature from Joshua Sanchez, comes back to the screens of his adopted city as part of the third edition of New Voices in Black Cinema series at BAM. A graduate of Columbia University’s MFA Film Program, Joshua Sanchez made his name by winning the HBO Films Young Producer’s Development Award in 2003. For his first plunge into the competitive world of full-length feature films, he decided to adapt a play by Pulitzer Prize Finalist Christopher Shinn, a personal friend whose work he had long admired.

The plot revolves around Joe (Wendell Pierce), an older married man who meets up with a young white boy he has been chatting with online: June (Emory Cohen) who hasn’t come out of the closet.  At the same time, Joe’s teenage daughter Abby (Aja Naomi King) asks Dexter (E. J. Bonilla), a Latino wannabe basketball star and small-time drug dealer, to pick her up. What follows is a night of mysteries: of first love, rampant desire, and frustrated communication, rendered with a subtlety and pacing that drown out the possibility of simplistic explanations. Rather, the interplay of the two stories, the connections and divisions between them, serve to broaden, rather than restrict, our understanding of the characters’ experiences.

The quality of the dialogue, the aptness of the casting and the actors’ astute performance, are the outstanding elements of this introspective and painful weaving of two stories and four characters on a 4th of July night in a contemporary American suburb. Wendell Pierce –also co-producer- plays another unforgettable character after his mythic roles as Bunk Moreland (The Wire) and Antoine Batiste (Treme), this time earning a nomination for an Independent Spirit Award. When the film premiered at the Los Angeles Film Festival, his interpretation, along with those of Emory Cohen, Aja Naomi King and E. J. Bonilla,won the ensemble the acting award at the festival.

Shinn’s original play was set in Hartford (CT), but due to financial restrictions, the crew had to move to other locations (Long Island and Brooklyn). This decision didn’t interfere with the final result of showing - in the director’s own words - a “general American space” recognizable to domestic and international audiences. Cars, the interiors of middle-class and lower class houses, a motel room, a diner and a basketball court: these are the spaces the four characters fill with their bodies, fragmented and reconstructed by Gregg Conde’s camera work with its subtle movement and surfeit of close-ups, heir to the cinema verité style emulated by contemporary indie filmmakers in the US. This evocative space, nocturnal and intimate, is the fifth protagonist of the film. The intensity of the close shots amplified by the expressiveness of a combination of shadow and darkness creates an atmosphere that both protects the ensemble of characters and discloses their inner feelings and conflicts.

The circumstances of the characters' lives are rife with contradiction: when Joe attempts to clarify the nature of June's coming-out, we realise that he has never been able to deal with coming out himself; later, the married Joe tells June, his lover for the night, that what he really wants is a boyfriend to touch, love and comfort him at night when he falls asleep crying. These words leave the spectator with the sensation that Joe is not just trying to mentor June, but to create a different narrative of what his life could have been. At the same time, the contradiction between the proximity created by a sexual encounter and the subsequent lack of emotional communication between the two lovers is clear when Abby fails to accept Dexter's family picture as a proof of his sincere intentions. Doing so, she both impedes his understanding of her suffering and denies herself the possibility of being happy.

Dysfunctional family dynamics are the core of much of Christopher Shinn’s work and permeate the structures, images, and dialogue in the film. Issues of race and cultural taboos infuse the conversations of both couples reaching their peak in two sequences. The first when Dexter, following his idealized image of gang culture, and haplessly trying to impress and provoke Abby, confides that he would like to be black, and stresses his point by saying that he speaks like a black man while she sounds 'like a white girl'. The second, which serves as a point of convergence for numerous plot lines, comes at the film's end, when it is suggested that Joe’s wife might be HIV-positive because of her gay husband, or else depressed at her incapacity to deal with her failed love relationship. The images of the harmonious African-American family that Dexter sees when he goes to Abby’s house are shattered by the ghost-like figure of Abby's sick mother, and during the last scene of the movie when, in the morning after Independence Day, Joe comes back home and lies down with her in bed.

After this impressive directorial debut, there is little doubt that Joshua Sanchez has a promising career ahead of him and that he will be a fixture BAM in the coming years. The film is slated for theatrical release this summer. Follow its progress via facebook.