Limit(less): A Groundbreaking New Photo Project On LGBTQ African Style In The U.S. 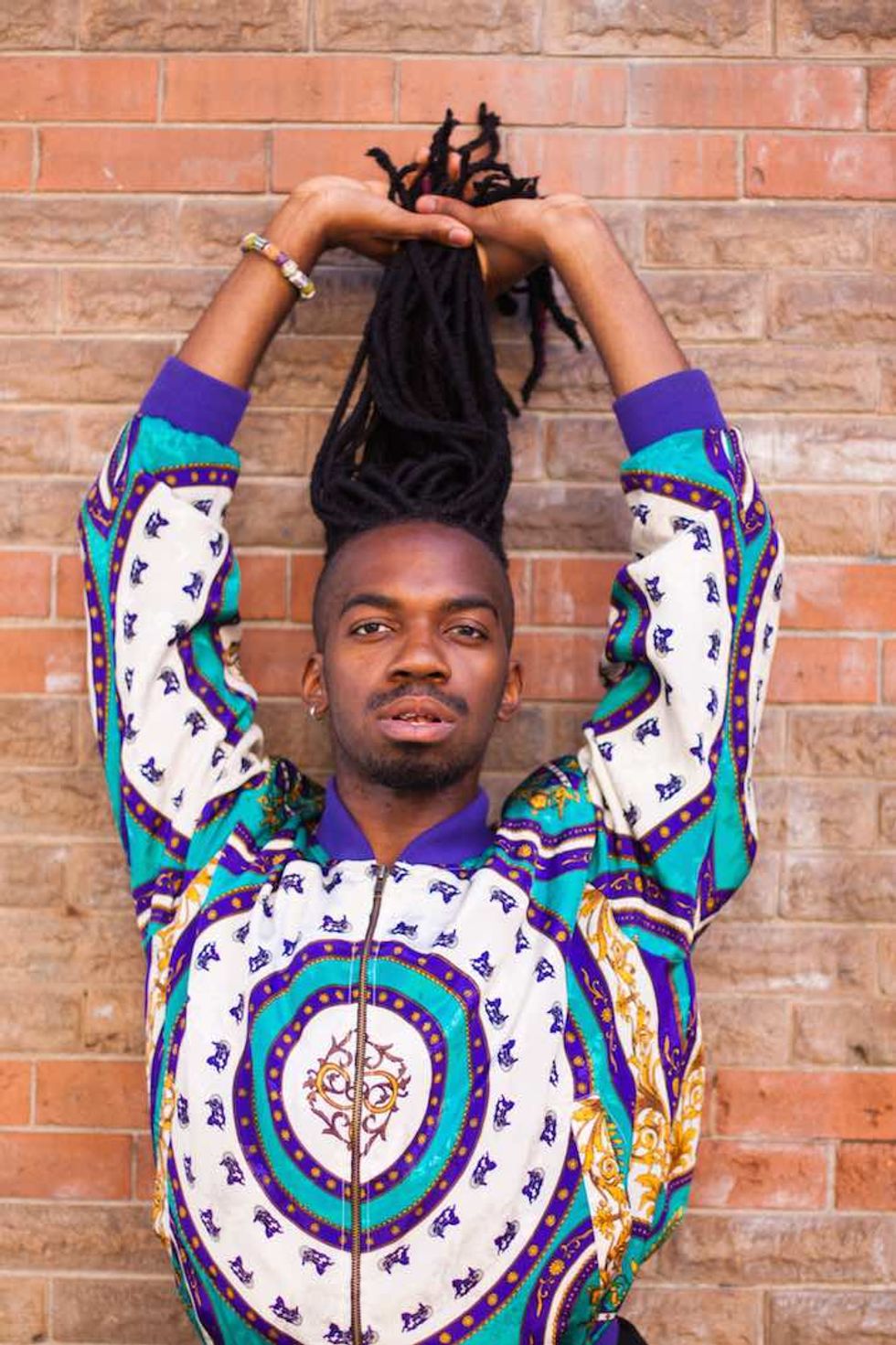 Nigerian-American photographer Mikael Owunna explores the visual aesthetic of LGBTQ Africans in the U.S. with his 'Limit(less)' series.

Limit(less) is a new multimedia photography series that seeks to explore how LGBTQ Africans in the diaspora are using visual aesthetics to navigate their cultural, sexual and gender identities. Through photos and interviews with first and second generation LGBTQ African immigrants, the nascent documentary project hopes to deconstruct colonial notions that LGBTQ Africans are somehow “un-African."

We reached out to Mikael Owunna, the Nigerian-American photographer and writer behind the project to find out more about Limit(less) and what he hopes to achieve with the series.

Can you tell us a little about yourself? Who is Mikael Owunna?

A bit about myself: I am Igbo, Swedish, black, immigrant, American and queer. I live at the intersection of many identities and questions of identity have always fascinated me because of this. Who am I, though? Honestly, I'm not sure. That is a question I'm still working on every single day, and my project is a part of that process.

How did you begin putting the Limit(less) Africans project together?

The project began pretty spontaneously actually. I had just returned to the U.S. from my Fulbright scholarship in Taiwan, where I worked on a collaborative art and photography project which was featured in a national museum exhibit there. I was back living at home full time with my family for the first time since I was 13—I had gone to boarding school—and being back brought back much of my fear and anxiety about my sexuality in my Nigerian family. I had lived a relatively free life, especially during college, so being back at home where certain topics, like my sexuality, were strictly "not to be discussed," was a shock to my system.

During this time a visiting friend dragged me to the Carnegie Museum of Arts. When I walked into the main exhibit hall, I saw an entire wall dedicated to Zanele Muholi's portrait series, Faces and Phases, and I stopped dead in my tracks. As a queer African person going through what I was at home, seeing that work resonated with me on a level I had never felt before. With a crucial push from some fellow Duke alumni after I saw the exhibit, I decided to begin researching and launch my own photography project exploring the lives of LGBTQ Africans in diaspora.

Why did you choose to focus primarily on style and visual aesthetics for the project?

There are a few reasons for this. Firstly, I am personally bored with depicting stereotypical one-dimensional narratives of pain for the white gaze. Growing up in America, my initial impulse was to replicate this gaze in my work, and I spent months envisioning a video documentary centered around our experiences of trauma as LGBTQ Africans. My conversations with other artists including Atane Ofiaja and Siobhan McGuirk and participants in the project helped shift and then correct my lens through which I was approaching the project. Yes, we face terrible homophobia and transphobia both inside and out of African immigrant communities, but our lives are multidimensional and we are still people. We still laugh, experience joy, love and more. We find ways to express ourselves and live out full lives as LGBTQ Africans despite these ostensible "limits" on our existence, and our visual aesthetics can be a key part of that.

For me, focusing on visual aesthetics also cracks at a second issue with homophobia and transphobia in African communities. The constant refrain I heard growing up was that being "gay" was somehow "un-African." It was really odd hearing this since I was living proof of someone who was both gay and African, but this language is still regularly used against LGBTQ Africans even though it has been historically debunked many times over. When many people are saying you can't be LGBTQ and African, I find it interesting how LGBTQ Africans blend these two aspects of their identity visually and overcome this artificially imposed binary.

You state on the Limit(less) website that your documentation will help to "deconstruct colonial notions that LGBTQ Africans are somehow 'un-African.'"

I got at this a bit in the last question, but there are many people who say that being LGBTQ is "un-African," and sadly most if not all of these people in my experience are fellow Africans. When I started the research for my project, the overriding question I started with was pretty simple: "Why? Why did other Africans tell me that I couldn't exist as a queer person or was simply a product of Western corruption? Why did being queer seem to 'invalidate' my African-ness in their eyes?"

Doing research with the help of a queer Nigerian friend revealed the answer to me—this line of thinking was a product of colonialism. There is significant scholarship that shows that people we would now identify as "LGBTQ" have always existed, including in precolonial African societies. Moreover, the colonial roots are not hard to find. European colonizers believed that black Africans were so close to animals that we could only be capable of "natural" animal impulses (e.g heterosexuality). This made the existence of LGBTQ Africans impossible in their eyes, so they taught us, their colonial subjects, that being LGBTQ was "un-African." And sadly many of us believe it to this day. I hope to visually deconstruct this colonial line of thinking with my work.

In Teju Cole's recent New York Times essay on West African studio photography, he talks about the marked difference between photos taken by colonizers and those taken by African photographers. Subjects are held in a "captive gaze" in the former, while in the latter they possess a sense of agency and confidence in who they are. Would you say Limit(less) is continuing in this tradition?

I think that the project as I'm shooting it now is very much in this spirit. As I mentioned previously, though, just being African and shooting other Africans isn't enough. The white gaze and those of colonizers can still inhabit and inhibit our work, and this is something which Toni Morrison has spoken at length about as well.

When I started the research for the project, the white gaze was definitely there but my shift toward depicting visual aesthetics helped me shake its hold on me. In the project I also strive to capture people as they are above all else. Each shoot is completely different and tailored to the individual, and participants have input at every stage of the process, before, during and after the shoot as well. Agency and collaboration are key, and when one participant told me that the photographs showed her as the person she felt she was becoming, I knew I was doing something right.

Do you hope to take Limit(less) outside the U.S.? What do you envision for the future of this project?

I'll be going to Trinidad to shoot someone for the project in a month, actually, so yes! I'm also open to expanding and exploring further as well. Ultimately, the project is evolving as we speak and each shoot changes it slightly but I see the work fitting well in a gallery space. I also want to explore incorporating video, sound and multimedia as a second stage of the project.

Are you currently working on any other projects? Or is Limitless your sole focus right now?

Besides freelancing, Limit(less) is my sole focus right now. I have also started writing fiction recently, which has been an exciting new creative outlet.

Can you share with us how your style incorporates/blends elements of your African and LGBTQ identity?

This is a large part of why I am doing this project, because, to be frank, my style does not blend these elements of my identity at all. I am about to turn 25, and despite coming out over a decade ago I feel like I only became really comfortable with my queerness in the last few months through my work on this project. Doing this work has also helped heal many of my personal issues with my Igbo identity. Growing up in America, my only experiences in Nigeria as an adult with family were all largely traumatic. Horrible, hateful homophobic remarks and I was put through a series of exorcisms on two separate visits to Nigeria as well, including once in my own village. These experiences of trauma repelled me away from my Igbo identity for many years, and it is only now that I'm beginning to heal and explore this part of myself again.

Through the project, I am seeking answers myself too if that makes sense. As someone who has struggled with their queerness and African identities for many years, I am drawing inspiration from all of the participants in the ways they bridge the supposed "divide" between the LGBTQ and African identities. My hope is that by the end of the project I will have found what that visual aesthetic means for me as well. A fully actualized queer African living vibrantly in their truth—that's my goal! Not quite there yet, so check in with me on this in a year or so as the project progresses.

For more information and photos from Limit(less), visit the official website. Keep up with 'Limit(less)on Facebook and Tumblr.