5 LGBT African Movies to See After You Watch 'Moonlight' 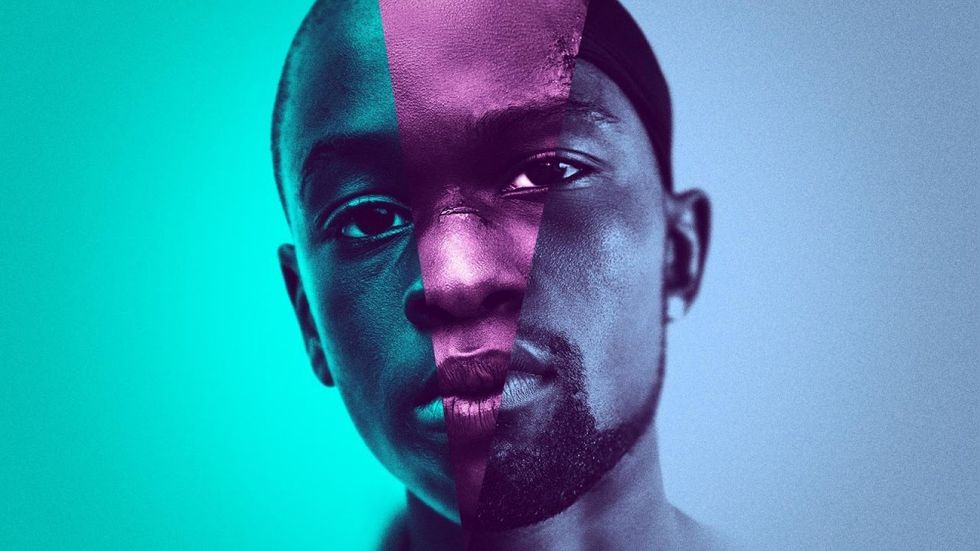 In honor of Moonlight and its portrayal of black gay identity, we look back at the most notable LGBT cinema from the African continent.

If you haven't heard, Moonlight is a truly remarkable portrayal of black gay identity. (Stop reading and go watch it right now if you haven't already done so.)

Barry Jenkin's coming-of-age masterpiece, based on Tarell Alvin McCraney's autobiographical play, In Moonlight Black Boys Look Blue, tells the story of a young black man growing up in Miami as he struggles to come to terms with his identity and sexuality from childhood to adulthood. The end result—and the entire 110 minutes of the film, for that matter—are nothing short of breathtaking.

In honor of Moonlight, we look back at some of the most notable LGBT cinema from the African continent.

Stories of Our Lives

Kenyan filmmaker Jim Chuchu and the Nairobi-based Nest Collective's anthology, one of Okayafrica's Top Films of 2014, depicts queer life in Kenya through a series of five black-and-white vignettes.

Each vignette is based off of a true story from a larger photo project, also titled Stories of Our Lives, in which The Nest Collective archived the testimonies of persons identifying as gay, lesbian, bisexual, transgender and intersex from Kenya beginning in June 2013. After several months of gathering stories, they decided to turn some of what they had collected into short films.

“We wanted to do this project for many reasons, but mostly because we wanted to tell stories that are not often heard, stories that characterize the queer experience in Kenya," the filmmakers say.

Stories of Our Lives had its world premiere at the 2014 Toronto International Film Festival. Two months later, it was banned at home by the Kenyan Film Classification Board.

The film is currently available to purchase on DVD via Big World Cinema.

The Pearl of Africa

Originally a web series, Swedish filmmaker Jonny von Wallström's 2016 documentary tells the story of Ugandan transgender rights activist Cleopatra Kambugu and her fight for love, along with her supportive husband Nelson, in one of the world's most transphobic countries.

“Capturing the transphobia that plagues the continent, the film as titled illuminates the pearls of Africa, the LGBT individuals who must fight for their dignity and humanity in the places they call home," wrote Okayafrica's Omnia Saed. “In its entirety, the film plays on the feelings of her laughter, on the beauty of being human, being in love and being happy amidst a world that dehumanizes, hates and pulsates on anger and sadness.

You can watch the full Pearl of Africa web series for free here. Stay tuned for news on upcoming screenings of the documentary.

Lost in the World

Johannesburg-based filmmaker Xolelwa 'Ollie' Nhlabatsi's 2015 short sheds light on the issue of corrective rape in South Africa through the story of a police officer (Honey Makwakwa) seeking vengeance following the brutal rape and murder of her longtime girlfriend.

“I knew about corrective rape, but I didn't know the extent of how the victims are treated through our justice system," Nhlabatsi said of his inspiration for the film. "I wanted to hopefully give some sort of sympathy or some sort of understanding that even though you didn't get justice, you're not alone. I wanted this film to embody that 'Fuck them, kill them all, whatever you need to do to survive.'"

Lost in the World had its online debut earlier this year as part of the New Queer Visions Film Festival's shorts compilation, Lust in Translation. Watch it here.

Academy Award-winning filmmaker Roger Ross Williams' 2013 documentary is a powerful exposé on how American evangelicals are bringing violent homophobia to Uganda. The director makes the case that Christian evangelicals are using Uganda as a proxy for waging the culture war against “sexual immorality" that they lost in America.

“Uganda is a place to go and build an army to do their bidding," Ross Williams said in an interview with Okayafrica. “Without saying it explicitly, I wanted to show that Uganda is the number one destination for American missionaries. And within Uganda they are welcomed because they are this white face of hope and power—everything America stands for."

The film is currently available to purchase on iTunes and Amazon.

This recent Spanish-Cape Verdean documentary tells the story of Cape Verde's colorful carnival and Sâo Vicente's empowered transgender community. As Okayafrica's Josephine Opar points out, it was at the insistence of the celebrated Cape Verdean singer Cesaria Evora that Serena set out to make the film, which follows Andrade, a prominent transgender activist, as she prepares for carnival. The São Vicente native is known mainly for coming out as a transgender woman in a 1998 newspaper article, which made it easier for others to follow suit.

The film has done extraordinarily well on the festival circuit, winning the Grand Jury Prize for 'Excellence in Filmmaking' at L.A.'s Outfest Film Festival where it premiered.

For a list of upcoming screenings of Tchindas, head here.