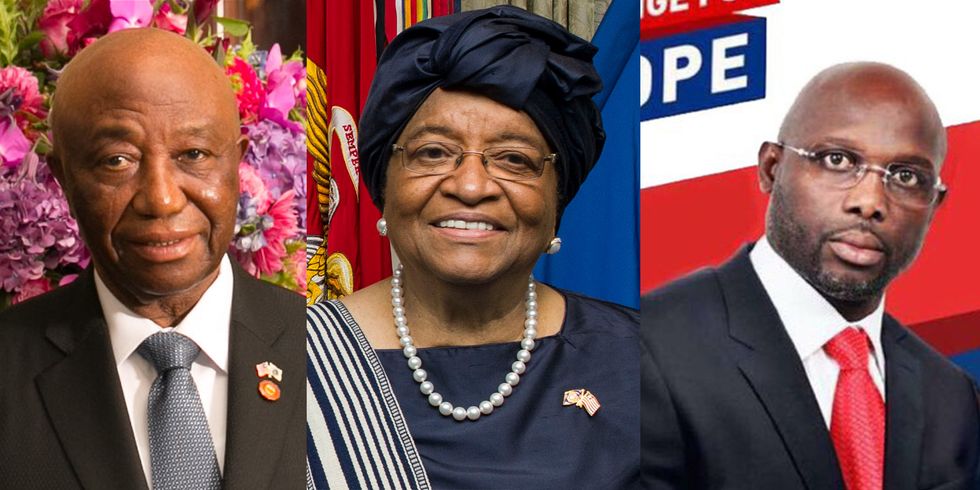 Regional leaders fly into Monrovia to help broker a solution to the political impasse. President Ellen Johnson Sirleaf is accused of meddling by her own party.

Perhaps you thought this year's Liberian elections would go smoothly. You were wrong. The process is now on hold until further notice as the tenor of the verbal sniping rises to new levels of nastiness.

The cast of characters feels familiar. George Weah, Joseph Boakai and Charles Brumskine are all long-time aspirants to the throne, none of whom seem particularly capable of bending the process much. Meanwhile, the proceedings are happening under the watchful hand of a sitting president the western press likes to paint as a benevolent matriarch, Nobel peace prize winner Ellen Johnson Sirleaf.

But as in most places in the world right now, Liberians don't have a lot of faith in their institutions and it's showing.

In the tally of last month's presidential poll, no contender got more than the constitutionally mandated 50 percent of the vote and a second round was announced between the top two candidates—former football star George Weah and the sitting Vice President, Joseph Boakai.

Just today, Liberia's Supreme Court ordered a temporary halt to second round preparations in order to hear a complaint lodged by the third place finisher, the Liberty Party and its leader Charles Brumskine, who allege that the initial vote was marred by mismanagement and fraud.

"These elections were characterized by gross irregularities and fraud, which undermined the integrity of the elections and deprived thousands of Liberians of their constitutional right to vote"—Liberty Party Complaint

If the complaint is deemed valid then the first round would have to be re-done as it was recently in Kenya. If it is dismissed then the second round could still go ahead as planned on November 7th.

Adding to the confusion are the accusations made by the leadership of the ruling Unity Party that President Ellen Johnson Sirleaf—their own party member—is guilty of manipulating the vote with the "intent of disrupting the fragile peace of Liberia" ostensibly for her own corrupt goals. To these allegations Sirleaf has said any involvement she had in the election was entirely constitutional and that these allegations amount to "hate-speech." Many believe the complaint is a reaction to Sirleaf's notable failure to endorse her Unity Party successor, Vice President Boakai, a move that has confounded many in Liberian politics.

Meanwhile, frontrunner Weah, who got 38.4 percent of the vote in the first round is calling on his notoriously rowdy partisans to stay calm and respect the process. This comes as ECOWAS has sent Togolese and Guinean presidents to Monrovia to help broker a solution.

In the next few weeks Liberian political observers will be looking out for the supreme court ruling and, perhaps more importantly, assessing whether Liberian political institutions are fully capable of enforcing that ruling—whatever direction it may take.