How Linkin Park Helped Me, And Other Black Rock Fans, Through Abuse & Depression 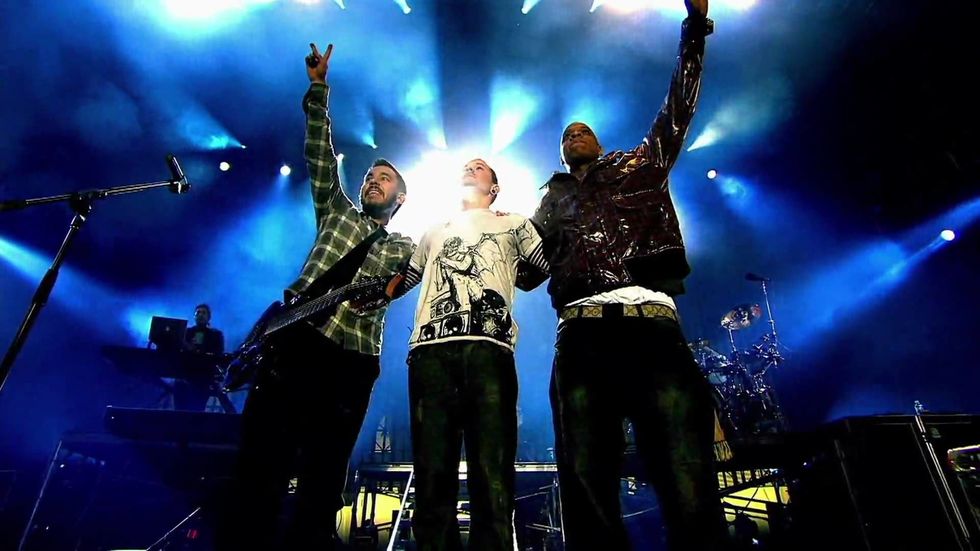 For my 14th birthday, I asked for one single gift: the CD of Collision Course, Linkin Park's groundbreaking collaboration EP with a then-retired Jay-Z.

I had been a casual listener of the band for a few years. Back then, it was impossible to miss “Numb" or “In The End" on the radio. But Collision Course was different.

I was lucky enough to grow up during a time when rock music was, arguably, the most popular it has ever been, allowing for a variety of sub-genres and bands to come up and reach a wider audience.

It's never easy being a black rock fan. You're exposed to bigotry, aggressiveness and ignorance from white fans and, sometimes, from black people as well. The French rock scene I grew up in, is openly racist and harbors an infamous disdain for hip-hop, which is seen as “garbage music."

For every single person who told me that rock was a genre I shouldn't listen to because I didn't belong there, Linkin Park's Collision Course and hip-hop collaborations with the likes of Cypress Hill and Stormzy, as well as the festival Projekt Revolution which they set up, were all proof that I did belong.

There was a way to like both hip-hop and nu-metal, as Linkin Park showed.

Collision Course wasn't just Linkin Park showing respect to Jay-Z, it was also him introducing them to hip-hop fans unfamiliar with nu-metal. The other way around was true: I started listening to Jay-Z thanks to the album.

For black fans like me, Linkin Park—as well as Korn with their classic music video for "Twisted Transistor," which featured a bunch of famous rappers like Snoop Dogg, Lil Jon, Xzibit and David Banner—was more welcoming because, not only would they not trash hip-hop like so many others, but they'd actually profess their love for the genre.

Collision Course still featured the dark lyrics that are characteristic of Linkin Park, but with lighter melodies. The way songs were mashed up, like my favorite “Izzo/In The End" or “Points Of Authority / 99 Problems / One Step Closer" led to some more upbeat tunes in which the lyrics still made sense. Words like “I kept everything inside and even though I tried, it all fell apart" didn't just express angst and despair but also a kind of lightness.

In other words, while Linkin Park songs could toss me into a whirlwind of dark feelings, the mashed-up songs would make me want to dance them away.

Back then, I was going through some of the exact issues Chester Bennington was singing about: abuse, depression, suicidal thoughts and the belief that the world would be a better place without me.

Many teenagers go through it, but some of us have been unlucky enough for life to have forced us to deal with issues too big for our ages. Children shouldn't have to play grown-ups and deal with their issues, but, unfortunately, life is not fair.

There's something utterly terrifying about dealing with abuse and mental health issues at such a young age, feeling like no one in the world can understand you, let alone adults, who are supposed to know what to do. And the rare time we see children talking about it, they are always white.

Even now, it seems that black kids can't feel angst too. They have to suck it up, pretend to be strong and not bring shame to their families and race. It's a silent pain, in addition to all the oppressions we face from a young age.

As I was falling into a deep pit full of my darkest thoughts and self-destructive behavior, because no one would see or care for my cry for help.

Linkin Park's songs gave me solace. I wasn't alone. Chester has gone through the same things I was living. He was an inspiration for me and I created art after his music. He knew what it was like to feel dirty and unlovable due to past abuse. The despair when you think about how you may never overcome your demons and start to thrive, instead of survive.

Even now, it seems that black kids can't feel angst too.
Being a survivor of childhood assault and abuse puts you in a very strange twilight zone where you can't go back to the child you used to be and lack some of the coping mechanism you were supposed to learn. You bury your head in shame and feel like you'll always be a monster. “But when things go wrong I pretend that the past isn't real," he would sing.

From that pain, Chester created beauty. Music that would force us to confront some of the darkest parts in ourselves, parts we'd rather avoid when we pretend everything is fine. Chester was singing his pain who became ours. We felt less lonely. I know I did.

But Chester was telling us, over and over, how despite the incredible success Linkin Park has had in 18 years—the Grammy awards, the money, the fame, the worldwide praise—he was still hurting. And we thought that it would pass, that now that he had achieved all the things we deem as most desirable in our society, he would get over his childhood, his addiction issues, his depression. That he wouldn't throw away the gift he had been lucky to catch and that so many of us would sacrifice everything to get.

But do we ever get over it? Is an unhappy childhood something we can forget? Is abuse, depression, addictions something that truly goes away, instead of silently lurking, always coming back when we're the least ready, when we believe we've finally reached happiness and that nothing wrong can ever happen to us again? Do scars ever disappear?

So often, the victims of abuse end their lives while the perpetrators get to live until the end. And that is the most cruel, unfair thing.

Chester fought hard. He kept on working and producing music with his brothers, his bandmates. He built a family with his ex-wife and then his second one. Having children. Conceiving a future for them. But sometimes, the rope we try to grab as we're falling is simply not strong enough, and this is no one's fault. I can only imagine how Chester's loved ones must feel but they have my deepest thoughts. Sometimes, no matter how hard you try, you can't save people.

And as I am writing this article, I am realizing that it's too late. The irony is not lost on me that despite having seen probably over 300 bands and singers in my life, Linkin Park is the only one I have yet to see. Indeed, I am too late and so is everyone else.

Chester is gone and will never hear my words. I will never have the chance to meet him and say thank you.

Thank you for providing a dim light in my life at the darkest hour. Thank you for giving me strength and inspiration to go beyond my pain to create art. Thank you for creating a new, groundbreaking way of mixing nu-metal and hip hop. Thank you for being brave enough to talk about your demons and trauma when so many people bury their heads in shame, praying for the pain to pass. Thank you for blessing us with your music.

Everyone deserves a happy childhood but some of us never had the chance to. And sometimes it kills us.