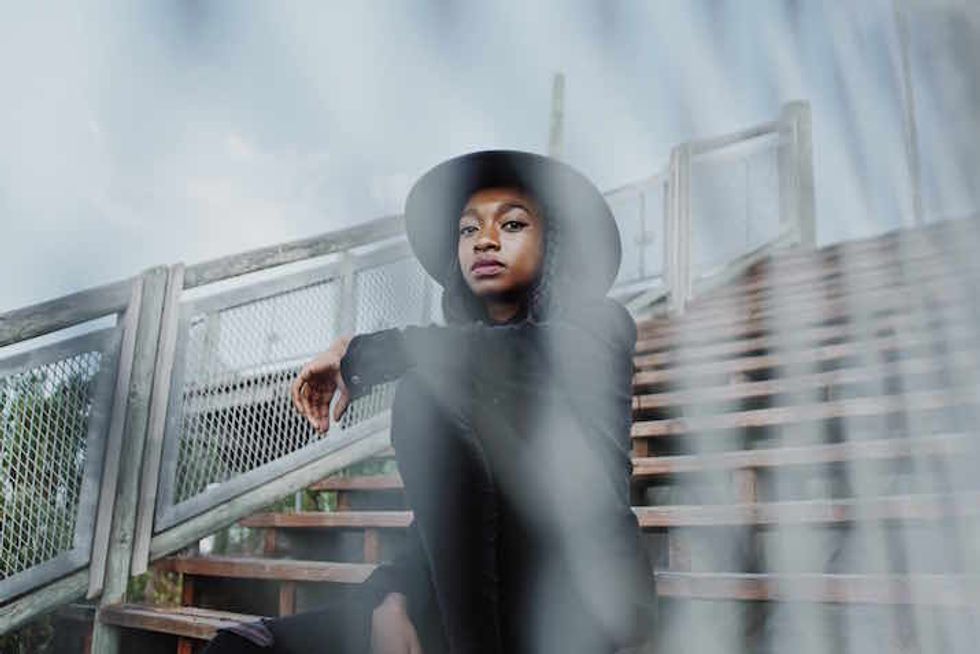 “This is my first time in South Africa, so I would like you guys to give me your best energy," yelled UK rapper Little Simz to a crowd of young fans at Cape Town's Khayelitsha township. The 21-year-old Nigerian-rooted MC, born Simbi Ajikawo, was in Cape Town as part of last month's Red Bull Amaphiko Academy–a 10-day event in which 18 of South Africa's brightest social entrepreneurs gathered for lectures and workshops in Langa.

Simz's South African live debut was electric. The rapper—tiny in stature and dressed in black from her fedora to her Chucks—whipped the young crowd into a state of angsty euphoria, rapping along to songs from her debut album A Curious Tale of Trials + Persons.

Struggling for breath in between athletic verses, she told the crowd that they were part of her new music video, for the song “Gratitude," featuring The Hics.

The clip, directed by Simz and Young Fathers' UK collaborator Jeremy Cole (and produced by OkayAfrica fam Allison Swank) combines footage from the day in Khayelitsha with a look at South Africa's recent student protests. The heart of the video is Cape-Town-based filmmaker and photographer Imraan Christian's coverage of the #FeesMustFall protest at the University of Cape Town.

We spoke with the video's Director of Photography Imraan Christian about the making of Little Simz's #FeesMustFall “Gratitude" video.

Sabelo Mkhabela for Okayafrica: How did you get to work on the Little Simz video?

Imraan Christian: Jeremy Cole and I had worked on a documentary on Ruffest Kwaito about two years ago with Roger Young, and we had been meaning to work together since. He saw some of my coverage of #FeesMustFall protests and he reached out to me about a video he was pitching, so we put together a treatment pitch for Red Bull which included my photos and about four days later, the entire UK crew, including Little Simz, was in Cape Town.

Had you heard of Little Simz and her music before shooting the “Gratitude" vid?

Yeah man, her music is really relevant in the underground hip hop scene of Cape Town. She is channeling and expressing some energies that is very close to our heart so it's quite the honor to work with her and Eddie Smith (her manager).

Whose idea was it to use your footage of #FeesMustFall?

It was definitely a collective yes, there wasn't much deciding. Simz was genuinely open to experiencing Cape Town's truth, and the voice of the students is loud and clear. I'm just happy that I could connect the dots. Jeremy's vision in the original pitch really came to life when all those involved in the video connected.

How did you get the two Red Bull Amaphiko alumni (Rayne Moses and Jarrel Mathebula) involved?

Jarrel and Rayne are both masters of their craft, and brought so much life to the video. Red bull made the connection and it just flowed organically from there.

Are you going to be doing more music videos after this?

Yeah, I'm actually working on one at the moment. It's going to be hella crazy but I can't mention too much about it now – got some radical shit in the pipelines, watch out. ?